The kettlebell arm bar is the single best shoulder mobility and stability drill you can practice. It gives the best bang for your buck with the most functional application to both specific training movements and daily life. Not only that, but it is simple to perform if the movement is safely understood and applied.

Let’s discuss why we need the arm bar, and when and how to employ it.

Why Is the Arm Bar Needed?

Given the daily anatomical position held by most of the athletes who walk through the doors of our facility, we see more excessive internal rotation, stiff tissue, and poorly moving joints than is preferable. This can stop in their tracks athletes who previously may have thought they were ready to start “finding the key to happiness.”

Yes, the kettlebell, when held overhead, inherently encourages improved range of motion and stability at the shoulder. With the elbow locked out, the shape and structure of the kettlebell moves the humerus into a packed position within the glenoid cavity of the shoulder joint. The lats then stabilize this position and—voila! Boulder shoulders, right? Not quite. Your athlete might be thinking along these lines, too, but there is a little more to the situation than that—mobility and stability to start.

Think of the muscular system as a patchwork quilt: a series of structures and seams that are interconnected. If you were to pull a thread from a seam at one end of the quilt, then the patches attached farther down the chain would move, too, as would any corresponding sections. So, like the quilt, our entire system can be effected by one area of issue or “pulled thread.” Tight shoulders then, aren’t just tight shoulders.

Let’s go back to our athlete who has spent all day sitting. As the anterior tissues of the upper torso are “crushed short” by the arms reaching forward for the computer, the opposite is true of the posterior muscles and fascia that are left “locked long” over the upper back. These two compounding directions of load eventually leave the spine—the thoracic spine, in particular—in rough shape.

When one section of the spine is stiff, the body finds other structures to move in order to make an action happen. When our thoracic spine is stiff, the body typically resorts to using the lumbar spine. Ask an athlete with poor shoulder mobility to place his or her hand overhead and the athlete will likely demonstrate a considerable lumbar extension curvature in doing so.

Encouraging or even allowing that athlete to then load an overhead position is going to cause some sacrifice of a safe spine position while compounding poor joint and breathing mechanics in the process.

The shoulder is a joint with a great capacity for movement but one that is often found stiff because of how long it spends in one position throughout the day. The tissues that surround the shoulder—such as the pecs, deltoids, and biceps anteriorly and the lats, traps, and rotator cuff posteriorly—are susceptible to the daily stiffening that causes poor joint mechanics.

The arm bar mobilizes the shoulder, and as the arm bar begins to stretch and move these tight tissues, these very same muscles need to react to stabilize the bell. In a “packed” position, the arm bar allows the scapula to retract, so the shoulder blade moves over the rib cage toward the spine, reversing the motion of a seated posture and internal rotation of the shoulder.

The arm bar encourages the shoulder to move freely without any major force application. As the mobility of the joint increases, the demands on the muscles surrounding the shoulder are increased also. Consequently, the athlete’s ability to control and move the kettlebell steadily to an effective position will be improved. This is stability. Stability and stiffness are not to be confused. A stiff joint is a joint that is intended to move, but doesn’t.

The kettlebell arm bar is featured at length in the SFG Level I Certification and Manual. If you are interested in becoming a better coach, athlete, and all-around human, I strongly advise attending a Certification.

Use these pictures, video, and instructions to help you build the arm bar into your training.

Start by performing three reps on each side, holding for five breaths/contractions. Use a light bell to begin with. The purpose of this drill is not excessive range of motion or load. The integrity of the joints, muscles, and the movement should be respected at all times. I would advise females to use 10-12kg and males to use 16-20kg to begin with, but choose what you feel is appropriate for your level and needs.

Where and When to Use the Arm Bar

Used as a stability exercise, the arm bar fires the myriad of primary and secondary muscles that are required for strong and healthy shoulders in a multitude of pressing and pulling exercises. As a mobility drill, the unique placement of load, along with the position of the surrounding tissues and joint structures during the exercise, makes the arm bar the ideal preparatory drill for those on a quest for overhead strength and pain-free posture.

It is no coincidence that the arm bar mirrors the movement patterns of both the get-up and portions of the windmill. These drills tax the fascial slings of the body to position themselves adequately for force production, movement capacity, and strength application. The crossover from such drills into daily movement and sport is profound. Segments of the get-up are found in acts ranging from getting out of bed to striking a tennis ball. And the windmill teaches us to position our spine safely while performing posterior hip tilt—something we often do incorrectly when bending to pick something from the floor or tie our laces.

The arm bar is for everybody—athletes and general population members alike. There are very few people who couldn’t benefit from more thoracic mobility and an improved, efficient posture. Now, get to work—and watch your shoulder range of motion bloom, your posture open, and your proclivity for pressing heavy things get heavier. 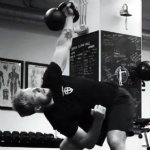 Jay believes that good movement and building strength is more than just lifting in the gym. It is in our daily character, the way we treat others, the relationships we build and the work that we do. This is his "Ethos."

He and his team specialize in developing a strong community around training with kettlebells, bodyweight, and barbells, cultivating happy faces, strong bodies and minds, and long-lasting results through smart and enjoyable training programs. You can learn more at EthosFit.com.