How do you strengthen sport required qualities in the gym and practice the skills it requires in sports-specific sessions when your chosen sport is a 3000 mile ocean row? No, not by rowing machines, ultra marathon runs or sit ups. By training your slow-twitch muscle fiber strength with barbell back squats and seated cable rows. Here’s how SFG II Roger McCarthy did it.

“The summit is what drives us, but the climb itself is what matters.” – Conrad Anker

Without doubt, StrongFirst’s foundational principles have held true in a wider range of contexts than I ever anticipated. In the decade since my first certification with Pavel, applying his teaching has enabled my students to achieve a diverse range of personal goals, whether standing painlessly from a chair, improving performance across a panoply of sports, or undertaking once-in-a-lifetime challenges.

And so, after I confirmed my participation in a four-man team in the Talisker Whisky Atlantic Challenge, I immediately asked Pavel the question, “Can you help me prepare to row 3000 miles across an ocean?‘”

The TWAC is a trans-Atlantic rowing race heading east to west, from La Gomera in the Canary Islands to Antigua in the Caribbean—a very similar route to Columbus’s first voyage. 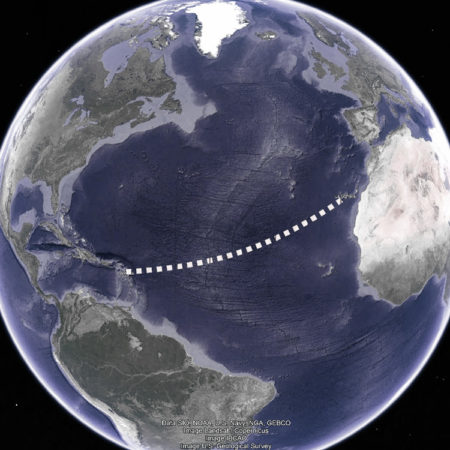 The crossing is unsupported: crews take everything on board they might need for the duration. Imagine living with three people, their food, and their possessions in a space smaller than two Mini Coopers end-to-end. You get the idea.

Half the crew rows for two hours at a time, while the other two rest, eat, and do chores in the small cabins at either end of the boat. That means that everyone spends twelve hours on the oars every day.

It’s not called the Atlantic Challenge for nothing.

So, how do you train for that? Spend countless hours on the rowing machine? Run ultra-marathons to build up your endurance? Perform thousands of sit-ups to prepare for being hunched over for long periods?

I chose none of those. And here’s why.

Training: Seeming Logical does not Equal Being Intelligent

Confession time: early in my training career, I fell victim to trying to simulate sporting movements in the gym. I had tennis players faking shots with dumbbells, soccer players kicking against rubber bands, and even swimmers writhing on the floor attached to multiple cable pulleys to mimic their strokes. Yes, I admit it, I was that guy. 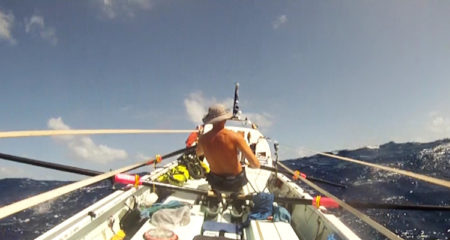 The principle seemed logical—performing sporting movements against resistance will make them easier to execute once the resistance is removed. However, there’s a big gap between seeming logical and being intelligent. It didn’t take long to realise my students were getting increasingly better at the drills in the gym without any corresponding performance increases or reduced injury rates when playing their actual sports.

After seeking help from much more experienced coaches, I went back to strengthening fundamental movements, such as squats, presses, and rolling patterns instead. My students started to feel better, run faster, kick harder, and become more resilient, too.

Lesson learned: strengthen the qualities a sport requires in the gym, practice the skills it requires in sports-specific sessions, and put the two together when you execute on game day.

Without an ocean practice ground, I’d have to approximate my sport-specific training as best I could on monthly coastal rows and weekly sessions in skiffs (traditional, wooden, heavy rowing boats), on the River Thames.

To complete my training plan, I had to ask myself, “What qualities will I need to develop for the challenge ahead?”

While river rowers generally spend their gym time on an ergometer, smoothly gliding back and forth for hours or powering through lung-busting intervals, ocean rowing has different requirements. You don’t have the luxury of long, fluent, symmetrical strokes very often. Instead, you’re working just to stay upright while the boat rocks, rolls, and squirms unpredictably beneath you.

Most of the time, each side of your body is doing something completely different as you wrestle the swirling water for control of the oars. And rather than completing 2,000 metres in a matter of minutes, we would be covering 3,000 miles in two-hour stints, six times a day, for weeks on end. This takes rock-solid stability and strength-endurance, not high-intensity cardio.

So I asked Pavel for his suggestions.

Pavel’s answer made sense: build your slow-twitch fibers. As outlined in his article “Should you train your slow fibers?” there’s a lot to gain from paying attention to what comprises the majority of your muscles. And yet, this important detail goes largely ignored by many. Perhaps the connotation of slow-twitch puts us off. Who wants to be s-l-o-w ? Faster is better! But in the context of muscles, slow means anything lasting longer than a sprint. If you want to try sprinting a two hour rowing shift, be my guest.

And so, I began following Pavel’s Slow Fiber-Building Protocols. The principles were:

Having done little but high frequency, full-range, ballistic movements and assiduously avoided training to failure for the previous 15 years, this would be a significant departure for me.

Happily, the leap of faith paid off and the program worked like a treat.

Using barbell back squat for lower body and seated cable rows for upper body, I settled on the following two sessions per week:

Each rep is slow with no acceleration, and you only explore the middle third of your full range of motion.

A set is as many reps you complete before reaching failure. For safety’s sake, failure means feeling unlikely to complete the next rep, not collapsing to the floor.

Load is determined by how long it took to reach failure. If you didn’t last 30 seconds, reduce your load for the next set, but if you lasted longer than 60 seconds, then increase it. If you were unable to complete all the prescribed sets of a session within the rest and load guidelines, repeat that entire week before progressing.

Optimal rest is 10 minutes between sets, which seems like an eternity compared to most programs. View it as time to practice unweighted get-ups, mobility drills, or other non-fatiguing movements. On occasion, I had to squeeze the rest period down to seven or even five minutes. With less rest comes an increase in difficulty, so adjust the load accordingly. If you are pushed for time, spread the sets throughout your day. Volume is key here, not density.

As Pavel alluded to in his original articles, this slow-twitch protocol is not for the faint-hearted. Prepare to get comfortable with being uncomfortable. Thirty seconds into each set, my brain would always declare, “Hey, this isn’t so bad,” only to scream, “I hate you!” fifteen seconds later.

The loads are so light (30-70% 1RM for lower body, 10-40% 1RM for upper body), that training to failure becomes a safe option. Go heavier and you’ll regret it, so put your ego and preconceptions to one side.

I repeated the six-week cycle four times, finishing each block with nine sets of a heavier weight than I had been able to perform four sets with when I first started the program. From first cycle to last, the loads I was using increased by more than 40%. Although small-framed, I also added two inches (five cms) around each thigh & three inches (7.5 cms) to my chest.

Most importantly, I felt stronger and more stable every time I got in a boat leading up to the race. Twenty years ago I’d tried to train stability by wobbling on unstable surfaces. This time, I’d trained it under a bar on solid ground and it was much more effective.

The extra muscle came in handy on our crossing too, as conditions were rougher than usual. Thankfully, the high seas took us in the right direction and we made it across in just under five and a half weeks, at least ten days quicker than anticipated.

Suffice to say, rowing across an ocean was an amazing experience—all 462 hours of it. While it involved a great many challenges that nothing could’ve prepared me for, I feel immensely grateful to have trained the way I did instead of how I would have twenty years ago. Live and learn.

Regardless of the physical challenge you’ve decided to tackle, being stronger will always help. However, “useful strength” is context-dependent. Ask yourself which qualities you need to improve, get guidance from an experienced coach, and then train accordingly.

Whatever your goal, however large or small, just remember to be strong first. 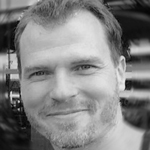 Roger has been a trainer & injury therapist for over twenty years. With his wife, Claire, he operates the Bodyology studio in Lincolnshire & StrongFirst events throughout Great Britain. He was part of Team Wight Lightning in the Talisker Whisky Atlantic Challenge 2017. Parts of him have since recovered.