Menu
Log in
Register
You are using an out of date browser. It may not display this or other websites correctly.
You should upgrade or use an alternative browser.

I was wondering if any members here have a hooked acromion and have successfully managed to work around it (without sub decompression surgery)? I used to train years ago and then gave it up due to constant shoulder impingement.

I know, however have a renewed lust for picking up the weights again and have started all the usual posture correction, rotator cuff band work and scap stabilisation work.

There is just this niggling doubt and mental block telling me that you were born with a hooked acromion and no matter how much you work on creating space in the acromion, it wont make a difference.

After a light workout of training just arms, the next day my shoulders are snapping and clacking loud enough to wake up the missus!

I guess I'm hoping to hear from members with bad and I mean, horrendously badly hooked acromions that have persevered and managed the problem?

Any advice or pointers would be greatly received.

The first question I have is:
How do you know you have a hooked acromion? Have you had x-rays taken to confirm this?

The shoulder is incredibly complex and it’s array of typical issues can stem from lots of different factors.

bluejeff said:
The first question I have is:
How do you know you have a hooked acromion? Have you had x-rays taken to confirm this?

The shoulder is incredibly complex and it’s array of typical issues can stem from lots of different factors.
Click to expand...

I had MRI and x-rays done a few years back (twice), so am sure I have type 3 yes.

SammyT said:
I had MRI and x-rays done a few years back (twice), so am sure I have type 3 yes.
Click to expand...

What exercises do you typically do for your shoulder(s)? The obvious would be to focus on as much scapular upward rotation as possible.

Also welcome to the forum

What exercises do you typically do for your shoulder(s)? The obvious would be to focus on as much scapular upward rotation as possible.

A good few years back I used to go to Harley Street in London quite a lot and was advised to do:
The goal for me is obviously to get the scapular working correctly and with type 3 hooked acromion, to try and create as much space as possible in the acromion space.

This looked interesting. They say that hanging can reshape the acromian. Could there be anything to it?

the hansenator said:
This looked interesting. They say that hanging can reshape the acromian. Could there be anything to it?
Click to expand...

Thanks, interesting indeed. I'll definitely look into this.

This image summarizes it:

from this page (which I didn't really read through, I just wanted to cite where the image came from) 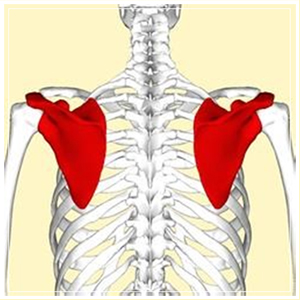 
From the image you can see how the scapula must rotate as you raise your arm(s) overhead in order to allow for enough space under your acromion to avoid any impingement issues.

My favorite exercises for this are:

1) serratus slides (Eric Cressey has some great videos on them), which done with a band will also incorporate external rotation, which is important in shoulder mechanics and often lacking in those that don't use it or "train" it.

2) landmine barbell presses- done with a single arm, at an angle that does not aggravate your shoulder. Be sure to allow your scapula to freely move. This is not a bench press. once again I believe Cressey has some good videos about the landmine. I have seen other individuals show it without really moving their scaps, which is at least half the point of doing landmine presses in the first place. Also, landmines will likely allow you to train a pressing motion without aggravating your shoulders (hopefully).

3) Original Strength rocking, and rocking pushups (just google them or find some of their videos on youtube). These essentially "trick" the shoulder into working the way it should, much like doing a "bodyweight landmine press," imo.


If none of those are doable for you, I'd go find a good physio. It might be a good idea to see one anyways just to get some good ideas about how to train around/with your issue.

What happens if you avoid overhead work?
Am not familiar with this issue, does it impede the entire ROM or is there a pain-free zone that is fair game?

Hi
First, I'd just like to say that this is my first post and I've really enjoyed reading the kettlebell threads, the input from @Steve Freides and the progress of @Pavel Macek in his Timed Sinister quest.
As a martial artist I've also bought the recent StrongFirst course from BJJ Fanatics website which I would recommend (review posted as per Steve's request)
Four years ago I had subacromial decompression surgery on my right shoulder and had suffered from scapular dyskinesis.
By far and away the best rehab exercise has been the TGU. I couldn't even do 1 Pushup without acute bursitis pain before surgery.
After hitting Simple Timeless last year I thought I'd have a proper go at ROP but my left shoulder soon flared up. Probably too much too soon and too little rest when combined with kickboxing training plus age of 44.
Since then I focused on reaching Timed Simple and now new course.
Postural attention each morning with SJ is also helping to improve my shoulder alignment.
Not sure how the "hook" feature affects your overhead position but if you want to lift heavy things overhead then TGUs rule in my book.