Programming is a science, a craft, and an art.

You can learn the science from textbooks and the craft from manuals. As for the art… To use a music analogy, once you have learned how to read notes, nailed your chords, and have played until your fingers bled, your work has just begun…

Nothing will elevate your art as much as “jamming” with your fellow fanatics.

Join Fabio and Pavel for a “heavy metal jam session” in which they will improvise their way through ten case studies in strength training—submitted by you. 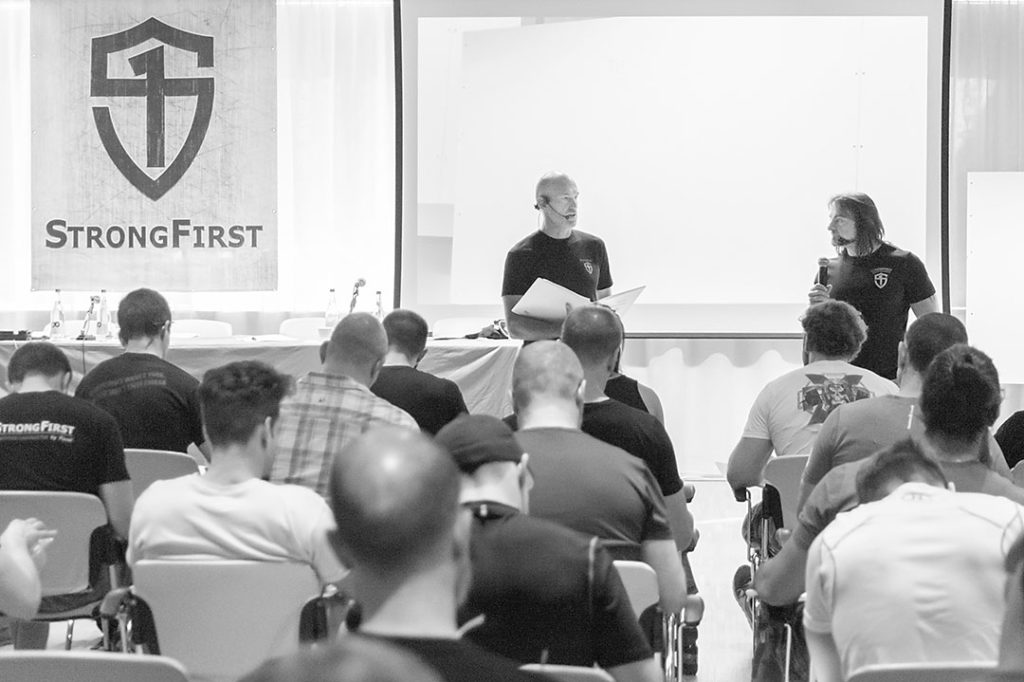 Fabio and Pavel will riff off each other all the way to a finished product. To make things more interesting, in some of the cases they will present multiple solutions. They might sound as different as “Stairway to Heaven” and “Speed King,” yet will lead to the same endgame of strength and excellence.

But that will come after a two-hour introduction to the science of strength and strength training planning.

The instructors will kick off with a brief overview of the relevant laws of biology and patterns of adaptation—many either not found in Western textbooks or buried deep—followed by a list of programming tactics that flow from them.

Then they will explain how very different training systems succeed despite seeming contradictions. Next you will learn why, more often than not, training systems cannot be mixed—while certain components may occasionally be borrowed.

Pavel and Fabio will touch upon the complicated relationships between different strength qualities (absolute strength, speed-strength, etc.) and explain how they affect programming choices.

Special attention will be given to athletes, military operators, and first responders who must be strong but cannot afford to be smoked and sore. A number of new and updated training templates will be presented to them: “Easy Strength Classic 2.0,” several “Even Easier Strength” and “Easy Strength through Easy Power” protocols, plus two old school Soviet “Easy Mass” methods. (The last two are so radical that they fly in the face of everything Western scientists and gym bros hold dear.)

Then the instructors will lay out some of the most effective—although not “easy”—hypertrophy training methods along with some science. The differences between training for strength and for size will be explained, followed by the guidelines on how to make the latter support the former and vice versa.

The Evil Russian and the Maestro of Programming will list the key neural adaptations to strength training—and the corresponding methods for achieving them.

The controversial topic of lifting speed will be tackled head on and solved once and for all. Ditto for exercise variety.

The science of rest periods will be next—more nuanced than the same old stuff permeating the industry.

The instructors will deconflict the qualities that mix as well as oil and water such as absolute strength and aerobic endurance. You will learn how to juggle them within a day, a week, and longer periods.

Combining strength and “strong endurance” training in ways that they support each other will be given the attention it is due.

Understand that within a two-hour window the above topics must be covered in broad strokes. During the seminar you will receive a document summarizing the above knowledge. Short but dense and extremely valuable to any strength coach or self-coaching athlete.

After drinking from a fire hose for a couple of hours, onto the case studies.

When you register for the seminar, we will ask you to submit a case describing an athlete, his or her accomplishments, goals, challenges, and limitations. Fabio and Pavel will select the most interesting cases to work with.

If the time allows it, towards the end of the seminar the Maestro of Programming and the Evil Russian will solicit a couple of additional cases from the audience and deal with them.

Join Pavel and Fabio for this one of a kind “heavy metal jam session” and walk away with confidence in your art and clear direction in your programming. As Led Zeppelin put it in “Stairway to Heaven,”

Would love to see this in a book or manual for purchase.
Especially the Russian easy strength for hypertrophy.

Would love to see this in a book or manual for purchase.
Especially the Russian easy strength for hypertrophy.
Click to expand...

Yes, this is what I'm jonesing for.

Certified Instructor
Very cool idea for a seminar, SF. Surprised that this price point is more equivalent to the certs, as opposed to equivalent to the other seminars, especially as the description seems to note only a few hours of going over material? Although a long time on case studies is very unique and fascinating....

A little too high for me right now unfortunately, but will be interested to hear reviews from attendees!

Certified Instructor
PS is it just me or does Pavel reference Deep Purple fairly often? At which seminar does he go over his favourite 70's hard rock/heavy metal albums? This is the stuff people want to know!

Certified Instructor
Hopefully it will come across to the UK soon.....

I have attended the Strong Endurance and Plan Strong seminars. One of the most useful things from these seminars were the manuals. Will there be a manual like coming from this seminar ? They mention a document, but how many pages will that document be ?

Beast Tamer
If you're a "Programming Geek," this seminar will be right up your alley!

Geoff Neupert said:
If you're a "Programming Geek," this seminar will be right up your alley!
Click to expand...

You should join Pavel & Fabio on stage!

Xene said:
You should join Pavel & Fabio on stage!
Click to expand...

Can I go on stage too as an example of what not sticking to a program looks like? The people can jeer and throw things at me.

Adam R Mundorf said:
Can I go on stage too as an example of what not sticking to a program looks like? The people can jeer and throw things at me.
Click to expand...

Just submit yourself as a case study!

Ryan T said:
Just submit yourself as a case study!
Click to expand...

I really should but honestly I think I'm cured. I hit a new growth spurt of maturity over the last month or two. I just wish I didn't waste a large portion of my twenties jumping from this to that.
Last edited: Feb 16, 2022

Inky said:
Hopefully it will come across to the UK soon.....
Click to expand...

Oh, Italy is wonderful for SF events. I don't think I will be able to resist.

David Szego said:
Oh, Italy is wonderful for SF events. I don't think I will be able to resist.
Click to expand...