Are You Really a Scientist?

This article is about knowing yourself, and how that relates to your training. I am a seeker of knowledge and have been for many years. I started my martial arts journey at twelve years old in 1972. But I am also a practical man who considers himself a practitioner – not a researcher or scientist. I know I am not a scientist, and, believe it or not, that gives me a great advantage over many.

Do I believe in science? Of course I do, but I couldn’t care less about the science behind practical training protocol. I look at the coach or instructor who recommends the protocol, and that is the primary consideration for me. In other words, I seek out the best trainers and martial arts instructors in the world and I train with them. Simple. No science involved.

Experience Is the Best Teacher

I remember when a big scientific study about stretching came out. All the pseudo scientists and shiny idea chasers were all over it. But I did not even bother to read it. Why? I trained with the greatest kicker walking the earth, Superfoot Bill Wallace, and he taught me how and why to stretch. Do I need a scientific study to convince me I should stretch? Of course not. When I see a scientist in a lab coat win the world middle-weight kickboxing championship and remain undefeated through his reign then maybe I would listen to him about stretching, but probably not.

I don’t read many articles on lifting weights anymore because I have no idea what most of them are talking about. I just read an article on why you should not deadlift and I probably understood about one tenth of what was said. Way too technical for me. And guess what I know from personal experience and from the experience of many others? The deadlift is one of the best absolute strength-building lifts.

So what do I go with: a bunch of technical ideas and theories or what I know from experience to be true? I am sure anyone who knows me already guessed the answer. Many of these articles have hidden agendas and bias in their motivation. This is not how you find truth or even good ideas.

I am not a personal trainer. I am a strength coach and martial arts instructor. I have never studied anatomy. But I know how to get strong, and I definitely know how to fight and hit things hard. I know movement from martial arts. I can spot weakness in movement and have been taught to instantly recognize it so I can take advantage of it. I have done this many times. It is a skill and I have it.

“So-called skill is to be victorious over the easily defeated. Thus the battles of the skilled are without extraordinary victory, without reputation for wisdom, and without merit for courage.”

It does not take a rocket scientist to fly a rocket, just a good pilot. I don’t like to overthink things, and I think many suffer from stagnation through analysis. Too many people chase the shiny stuff and forget the fundamentals.

When I was in the military, I could fix my position in an aircraft flying 400 miles per hour within a quarter of a mile using stars or the sun and the moon. I could drop a bomb or paratrooper on a fixed point on the earth simply looking out the windscreen of the aircraft. I knew little of the science behind celestial navigation and ballistics, but I was highly skilled at the practical application of both.

I relied on the fact that many had done this before and they had a practical way to teach me to do these things with little understanding of the science. This approach works. It is done all the time. But for some reason many strength coaches think they need to have a scientific study to back up anything they do. It is a silly waste of time for most.

I love Pavel’s books. They are written in plain, easy-to-understand terms. The same with Dave Whitley’s bent press book. Other than that, I stick to the old books like Arthur Saxon’s The Development of Physical Power and Text Book of Weight-Lifting.

Technical lifts and martial arts require hands on instruction. That is why I sought out Pavel and attended his challenge to learn kettlebell lifting. He is the best and that is where I went. Simple. When I wanted to learn to improve my kicking for karate tournament competition, I brought Bill Wallace in for seminars. For Kempo, the late great Stan Hart.

When I stalled out on the two hand anyhow, I found a Dave Whitley seminar. Poof – no more sticking point. And guess what? Not one time did Dave cite a scientific study. He simply taught the form and progressions that made him a great bent presser.

If you seek knowledge in practical application, you don’t have to waste time on scientific studies. Go to the best in whatever discipline in which you are attempting to improve your skill. There is no better way. 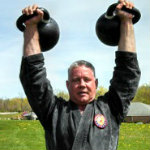 Gary Music began training in Sang Moo Kwan Taekwondo in 1972 at the age of twelve. He attained a rank of first Dan in 1976 at the Gary Harris Taekwondo Institute in Mansfield, Ohio.

Music continued his study of Karate-Do to this day, attaining 6th Dan ranking in Shotokan Karate-Do and Taekwondo through the AIKA. He also is ranked at 8th Dan in Shurite Kempo, Grand Master for the Shurite Kempo Technique Association.

Music is a certified SFG level II/SFG-FMS level II Instructor. Sensei Music is available for seminars on Life Protection Systems and The Art of War lectures. Contact him at SenseiMusic@ShuriteKempo.com.

17 thoughts on “Experience and Skill Will Always Trump Science”