Life is unpredictable. So training that helps us withstand and react to asymmetrical loads and stresses goes a long way in making us more resilient. Kettlebells are perfect tools to help with that—especially when we add specialized odd-load varieties in our training. Not only are these moves great for those without matching doubles, but they are also fun ways to improve your versatility once you are proficient with one kettlebell or two equal-sized ones.

People love symmetry. It pleases the eye and resonates with our sense of aesthetics and beauty. We find symmetrical faces appealing and build symmetrical objects and structures. But symmetry doesn’t always make sense, especially when training to meet goals like improved performance, increased power, greater strength or enhanced stability.

Because real-life strength is not about symmetry. Most of the time when we lift and carry something in everyday life, that object is neither symmetrical nor balanced. Think about picking up a piece of furniture or carrying your child on a hiking trail over uneven ground. Real-life strength is about our body being able to adjust to weight imbalances on a frontal and/or sagittal plane. It is practical but seldom developed in the gym. For example, very few people regularly train with an odd-load on a barbell.

Because we need to train anti-rotation patterns. According to Dr. Craig Liebensen, “Legs and hips generate the force, the core transfers the force, and the limbs release the force.” Odd-load training helps us to stabilize our whole torso through the transverse plane in order to generate and release force in other parts of our body.

Because we need to breathe in any position. Every breath we take is different, as our breathing mechanics have to constantly adapt to the shape of our ribcage. Odd-load training creates an additional demand that forces us to optimize our breathing under load.

Kettlebells are particularly well-suited for odd-load training—the only thing needed are two bells with enough weight difference to create the training adaptation. We can, therefore, apply odd-load training concepts to a wide array of fundamental hard-style kettlebell skills: the Deadlift, Swing, Clean, Squat, and Press. In each skill, it’s important to regularly alternate which hand holds the heavier kettlebell. Switch the bells on every set to equally distribute the training effect on both sides of the body.

The Deadlift is probably one of the first skills learned by a beginner girevik. Double kettlebell work adds load and steering strength since both arms have to stay connected independently. The Double Kettlebell Deadlift with different weights adds more load with upper-body-focused anti-rotational training and loading variety. It’s all about control— you have to raise both kettlebells at the same speed and keep them at the same level regardless of the weight difference. 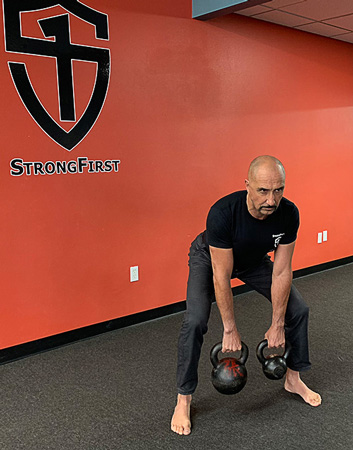 This movement adds anti-rotation training to the traditional Suitcase Deadlift and is, therefore, an additional option that sets the student up for movements such as Farmer Carries.

Single-leg variations are in general the most difficult Deadlift skills, and prioritize anti-rotation, with an emphasis on the lower body. Single-leg variations of the Odd-load Kettlebell Deadlift simultaneously incorporate both upper and lower body anti-rotation training, a must for anyone who wants to get stronger in any position under load, as is often the case in contact sport and throws.

These skills complement the Deadlift, with the additional demand of grip and/or wrist strength. When it comes to odd-load training, marching while in a Farmer or Rack Carry position also challenges torso stability.

Double Kettlebell Swings are always more challenging. When you double the weight, you also need to double the control and timing. Odd-load training adds an anti-rotational component to the Double Kettlebell Swing, despite the fact that for this variation, you won’t be doubling the weight of the heavier bell as the other will be lighter. The greater the weight difference between the kettlebells, the more torso stability, and shoulder connection are needed. The goal is to keep both kettlebells at the same height at all times. From a practical standpoint, a four-kilogram difference is a minimum needed to see any neural adaptation. Because of the ballistic nature of the Swing, the body has to constantly adapt to the difference in the velocity of the two kettlebells. 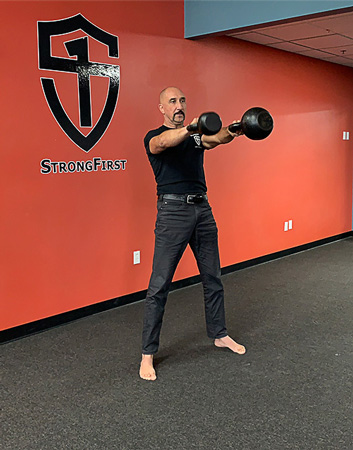 A quick mention here about the Odd-load Double Kettlebell Snatch. It is definitely a very advanced skill that should only be practiced by the most experienced lifters. Its ballistic nature creates a neuromuscular demand that beginner and many intermediate gireviks are not ready to withstand. Plus the odd-load component adds an anti-rotational element that needs to be properly mastered to avoid bad form and potential injuries.

Similar to the Odd-load Double Kettlebell Swing, this exercise adds an anti-rotational element to an already complex hard-style kettlebell skill. Timing is everything in the Clean, and having to deal with two different-sized kettlebells increases the demand on the nervous system. As with the Odd-load Double Kettlebell Swing, the greater the weight difference between the kettlebells, the more torso stability, shoulder connection, and skill are needed. 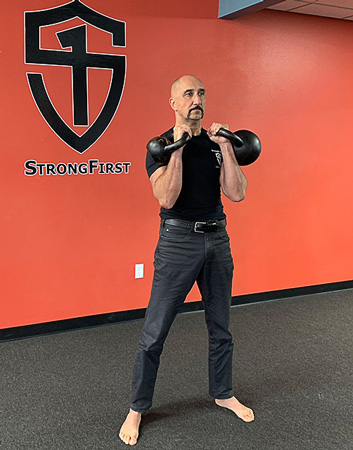 One of the main challenges of the Front Squat is to preserve torso stability and shoulder connection throughout the movement. Lifting two different-sized kettlebells increases the need for control and stabilization. It becomes extremely easy to spot torso imbalances or insufficient lat activation. It is also one of those skills where being able to breathe optimally under an uneven load becomes critical. 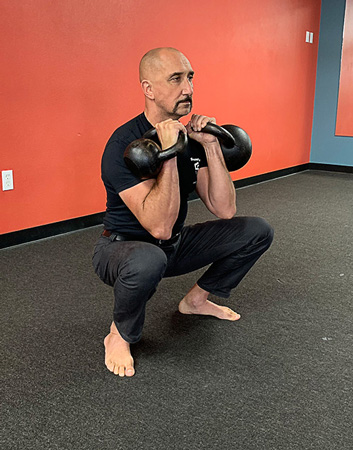 This variation introduces grip and steering strength demands into the equation, increasing the neural load.

When it comes to pressing two kettlebells overhead, their respective sizes play a huge factor in the neural, structural, and muscular adaptation of the lifter. Weight choice is critical, as it determines not only the ability to press with good form, but also the connection to the ground, the stability of the torso, and your control over its trajectory throughout the movement. The greater the difference between the two kettlebells, the more challenging it becomes to keep appropriate control and whole-body tension/integration.

Because of the more dynamic involvement of the legs compared to the Strict Military Press, the Push Press and the Jerk introduce an additional element of whole-body coordination and timing. Odd-load training enhances this effect by creating a left-right imbalance for the nervous system to factor in.

Here are three ideas on how to implement odd-load training into your or your students’ practice. The first one is for beginners, the last two for more advanced practitioners.

Up and Down the Odd Ladder

Equipment: 4 kettlebells of consecutive sizes placed in a row from kettlebell #1 (the heaviest) to kettlebell #4 (the lightest)
Skills: Double Clean, Double Squat
Protocol:

Using double-but-unequal kettlebells offers the opportunity to add resilience to your strength. Enjoy your Odd-load training and please report your results in the comments below or in our Community Forum. 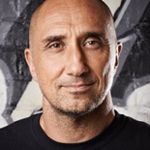 SFG2, SFB, CSCS, BExerSc, FMS2, GFM2
Vic Verdier has been a sports enthusiast since his early age and an active instructor for more than 35 years—having trained over 3000 instructors worldwide. He first taught physical training and other military-related activities as an officer in the French Commandos, and spent two decades teaching cave diving at the highest level, becoming one of the deepest explorers on the planet.

Vic is a self-defense instructor, a swimming coach, and an experienced strength and conditioning coach who has taught courses and seminars almost all over the world. Author of more than 200 sport-related articles and eight published books in English and French, he is a MovNat Master Instructor and former General Manager of the company. He discovered hardstyle kettlebell training a few years ago and is now involved in several projects designed to improve the teaching tools used by StrongFirst Instructors. You can find Vic at Kettlebility in Seattle, WA.

6 thoughts on “Get Stronger with Odd-load Kettlebell Training”