As coaches and trainers, we have all seen articles and books on the art of coaching. You may have even attended a workshop or seminar. We, as coaches, are always seeking ways to make ourselves better at our craft. This is admirable as our athletes and students deserve the best from us.

But what about when you, the coach, have a goal in mind that requires you to seek outside help? Have you ever stopped to consider how coachable you are?

We are always busy coaching others, but we rarely think of ourselves on the other side. I recently switched roles when I set my sights on the Beast Tamer Challenge, and the experience gave me renewed insight into what it feels like to be coached – and how to be coachable.

Why I Knew I Needed a Coach to Tame the Beast

The Beast Tamer is a challenge that has been around since the days of old. For those not familiar with it, a person must perform a one-arm press, a one-leg squat (pistol), and a pull-up each with a 48kg kettlebell (for women there is the Iron Maiden Challenge using a 24kg kettlebell). If you look on the StrongFirst website, you will notice the list of people who have achieved this accomplishment is pretty short.

My first step was to purchase a 48kg kettlebell. The first time you pick up one of these, you realize some organized training will be in order to achieve the Beast Tamer Challenge. I was already able to do the pistol, so I could scratch that off my list. But the press and the pull-up were a different matter. I decided to send an email to Pavel. I told him my plans were to complete the Beast Tamer at the upcoming SFG Certification in Santa Cruz.

At this point, I became the one being coached.

You Must Press a Lot

I followed the program exactly as written, never once asking if I could do this instead of that or the other questions we tend to get from our athletes when we coach. I put total trust in the experience and knowledge of Pavel and only focused on the process.

It was a big shift in training for me. I struggled the first couple of weeks with the high frequency and volume. The volume and intensity waved over the course of five weeks, and at the end I was asked to test a new maximum effort lift.

It was a challenge, but I was able to press a 48kg kettlebell with my right arm at the end of the cycle! I pressed it about halfway up with the left arm (and, truth be told, I have not since tried with my left arm as you only have to press it with one arm at the Cert).

Looking back, I noticed the majority of my pressing was done at 80% of my then max (32kg is 80% of 40kg). This allowed me to create a nice groove of pressing with a challenging load that I could repeat over and over and remain fresh. For those of you who have done high frequency training, you know it also gives you an opportunity to refine your technique. During this time, I was also doing grease-the-groove work for pull-ups with a 24kg and 32kg kettlebell.

Being Coachable Means Trusting Your Coach

At this point, I was still seven weeks from my Certification. This meant I needed to plan to maintain my ability to press the 48kg kettlebell, and ideally improve the speed and groove of my press. The press can be fickle. You have to maintain a certain level of frequency without going over the edge.

What Pavel sent me next had me concerned when I first read it. The new plan was based around a new max. Frequency was increased to a fourth pressing session and intensity was constant, except on the fourth day when I would press the 40kg (83% of my new max) for a couple comfortable singles or doubles depending on how I felt. The other three days were done with a 36kg kettlebell (75% of my new max). The main variable manipulated here was volume.

After looking at the plan for a couple days, I realized I had asked for coaching. So, once again, I took the program and performed it as written. I had to trust 100% in what Pavel had planned. Many would look at the program and consider it boring. It is true there was not much variety, but I also had a specific goal that required specific training to achieve.

Sure, there were shiny objects I wanted to chase some days, but as Dan John said, “You have to keep the goal the goal.” When viewed through that lens, the training plan did not feel boring.

So Close, But So Far Away

About twelve days before the Cert, I tested my press, pistol, and pull-up with a 48kg kettlebell. The pistol was still there as expected. The press was crisper than my last attempt seven weeks earlier. The pull-up stopped at my nose.

I dropped to my garage floor and panicked. After all that preparation, I could not finish the pull-up to the standard. Looking back through my training, I realized I had not given the pull-up the same level of priority as the press – a classic case of training arrogance.

I contacted Pavel and explained the problem. His answer caught me off guard. Weighted flexed-arm hangs. Using isometrics to push past a sticking point is beyond my training knowledge, but after contemplating his solution, I said, “Yes, sir,” and went to work.

If You Have a Goal, Then Have a Coach

When I arrived at the Certification in Santa Cruz twelve days later, I was able to tame the Beast. The press was a grind but I stayed tight, found the groove, and finished. The pistol was not an issue. The pull-up was surprisingly easy after being impossible just days prior. Mission accomplished.

As someone who coaches others, what I gathered from this experience is that sometimes it is best to seek outside help when you have a goal. The outsider can look at where you are and offer a clear path. The important part is following the plan of your coach. You expect your athletes to trust your programming. It should be no different when you ask someone to program for you.

To achieve your goal, you must be willing to put all your experience and knowledge aside and follow another coach’s plan. There were times when I thought about changing something or adding in a different lift, but when I had those thoughts I took a step back and saw it almost as being disrespectful to Pavel. Why ask for help if you are not willing to commit?

I will leave all of you with a challenge: pick a goal and have someone else program your path. It gives you real insight into how you expect those you teach to act. Even coaches need a coach. 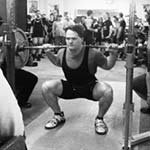 He travels and teaches the CrossFit Mobility Certification as part of the seminar staff. He has been involved in weight training, powerlifting, teaching, and coaching for 22 years. He works with a wide range of people at his clinic in northwest Iowa.

Currently on hiatus from competing, he always goes back to picking up his kettlebells. He can be reached at travis@mobilitywod.com

11 thoughts on “How Being Coachable Helped Me Tame the Beast”