Here’s the thing. We teach get-ups very light. That’s because students are moving around for the very first time with a weight overhead. And so of course, there is a danger of dropping a very heavy weight onto your very vulnerable face. 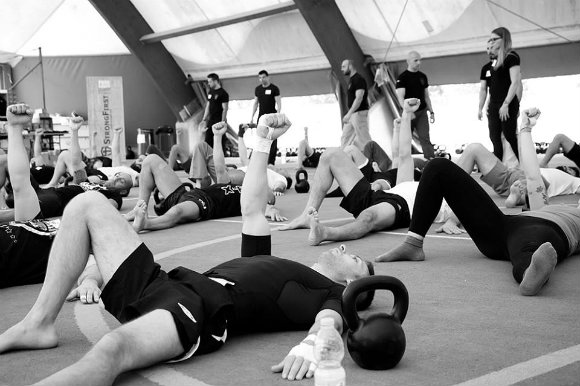 Where Did We Get Confused About the Get-up?

“Naked” get-ups, shoe get-ups, and very light get-ups are all great teaching tools as well as good practice and mobility work. I think when the awesome book and DVD set Kalos Thenos came out people lost interest in heavy get-ups almost completely, replacing them with the light get-ups with neck/shoulder rotations and the high hip bridge — much like when people gave up heavy snatching altogether when Viking Warrior Conditioning came out.

I am not saying the Kalos Thenos get-up is bad — on the contrary, I think it is a great drill for both newbies and advanced lifters, as well as an instructor tool to screen movement problems, asymmetries, spot tight hip flexors, and the list goes on. But when a whole type of get-up is abandoned, then a crucial part of the picture is missing. 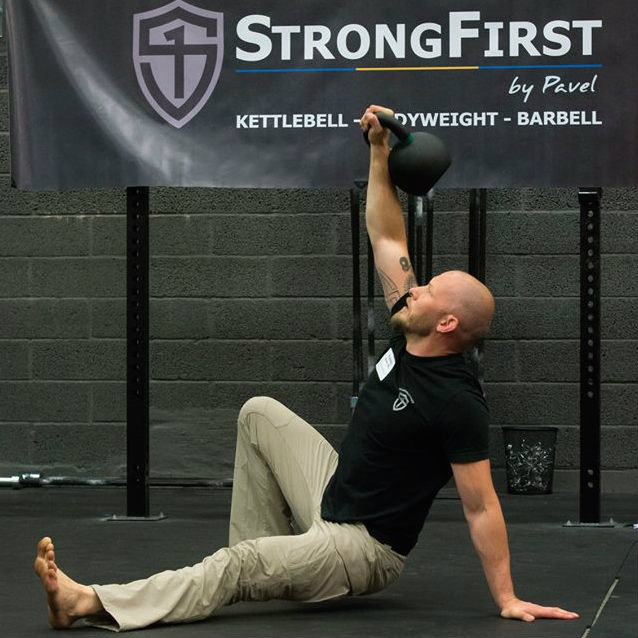 StrongFirst’s Expectation About the Get-up

Kalos Thenos get-up yang is the heavy get-up. StrongFirst is first and foremost a “School of Strength” and we should get moving with some heavy weights overhead. As Master SFG Brett Jones said one weekend as we were getting ready for the SFG Level II Certification, you should have the ability to own different kinds of get-ups. You should be able to high hip bridge and low sweep — as well as many other kinds of get-ups. It’s all about body control and strength.

The heavy get-up will look a little different. You will probably have to sit more into your hip to get under the weight for more leverage when coming up into the kneeling position. Your breathing will be more of a power breathing style. The high hip bridge is probably out of the question if you are maxing out. A max-weight get-up looks very different from the Kalos Thenos get-up — and that’s okay. 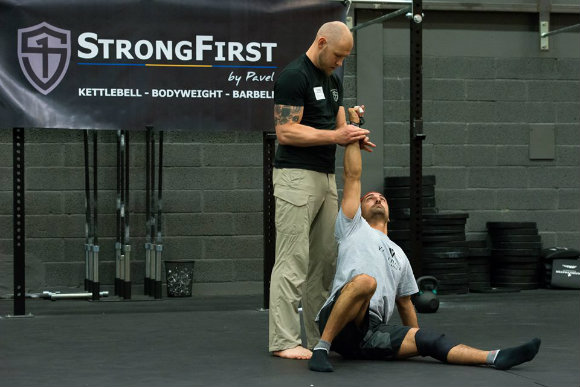 So how do you work on getting up with a heavier weight? You do some drills to make sure you know how to use your body as a single unit.

Kneeling and half-kneeling press drills take out some “cheating” and force you to lock into place. You may feel your abs working extra hard on the opposite side (the body is set up like an “X” but that is a whole different story that I will let Tim Andersen tell here.)

After you do these drills, try something heavy. In the four classes I observed today at my gym, we set eleven personal records after doing various half kneeling press drills. Some of those records were set by newbies (who are expected to move up relatively quickly), but others of those were from students who had been with us for years. One student who has been coming for three years did her first get-up with a 16kg — and made it look easy! 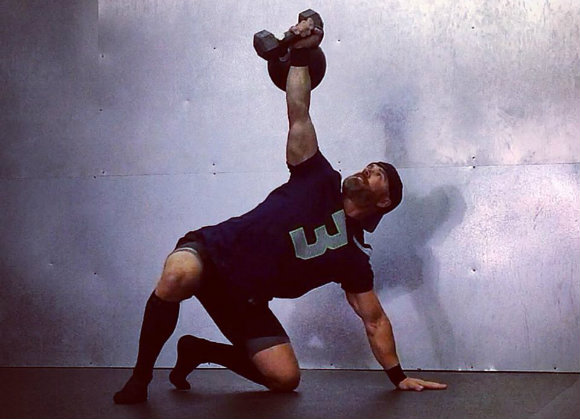 The Kalos Thenos get-up is a fantastic way to perform the exercise, but it’s not the only way to train get-ups. Just like you can use Master SFG Dan John’s Easy Strength program to pattern movements with lighter weights in order to train for a personal record, you can increase your mobility and stability with the Kalos Thenos get-up in order to get-up with some substantial weight above head, and it will help increase your other lifts as well.

If you are trying to press a certain weight, get-up with that weight or even one bell heavier. Getting used to moving around with that weight overhead and using your whole body to connect to support it will get you your gains faster.

Senior SFG
Delaine Ross got her Russian Kettlebell Certification (RKC) in September 2006, where she won the form and technique challenge. Soon after, she moved back to Atlanta and opened Condition Kettlebell Gym.

Delaine got her RKC Level 2 certification in June of 2008 and in March 2010 was promoted to RKC Team Leader by Chief Instructor Pavel Tsatsouline. When Pavel created StrongFirst, she accepted a Senior Instructor position in the new organization. She is excited to continue to use her experience and expertise to spread kettlebell training and its benefits teaching both newbies and instructor level courses.