I first became aware of kettlebell training in 2000 and began using them two years later, when I recognized their ability to make people more powerful and flexible. One of my driving forces was finding ways to fix my own shoulder issues, and when I saw the true potential of kettlebells firsthand, I knew this kind of training could also help my fellow firefighters become more durable. This is how I convinced my chief at the time to send me to my first kettlebell certification with Pavel. Once I got back to the fire academy, I began sharing what I’d learned with my colleagues. All these years later, we’ve put almost 200 firefighters through kettlebell training, and also extended the careers of many male and female veterans. This is the story of that journey.

My original mission was just to change how our fire department approached fitness and physical capabilities. The old model was a combination of running yourself to death and old-school bodybuilding, which might work when you’re in your early 20s, but takes a heavy toll by the time you’ve been on the job for a few years. Our duties are stressful in their own right, so I was also looking for a minimum effective dose of functional exercise that would make us ready for anything without taking too much time or energy out. This made kettlebells the perfect fit for our department.

Initially, I stuck to the basics I had learned from what would eventually become the StrongFirst education curriculum. From a practical standpoint, this meant a program built around two key exercises: the swing (two-arm and one-arm variations) and the get-up. As I went deeper down the rabbit hole, I started to add in some squatting, pressing, and other loaded archetypal movement patterns as well. While I had a lot of prior experience with barbells, for the sake of simplicity and making the best use of our space, the combination of kettlebells and bodyweight was the most suitable one-two punch for me and my fellow firefighters.

As time moved on and I came to understand StrongFirst principles better, I saw the potential for combining kettlebell ballistics and grinds with primal movements. For example, we’d do a set of one-arm kettlebell swings and them immediately crawl (with full turnout gear and face pieces on) across the floor or up and down stairs. The purpose here was two-fold. First, the patient pace of the crawling was a nice contrast to the power and explosiveness of the swings. Second, there’s the practical element: in both training and when on a call, we often have to crawl wearing full gear and breathing apparatus.

Speaking of which, if you’ve been part of the StrongFirst community for a while, you might’ve heard about a unique way my colleagues and I created a realistic simulation. I had firefighters suit up with all their gear, and then see how much high intensity kettlebell work they could do on a full air tank. The notion here was that air management becomes key when you’re battling a blaze. If you start taking big gulps of air early on, your tank is unlikely to last long enough for you to do what the situation demands.

Whereas if you can maintain high power output with consistent and efficient air intake after finding a consistent cadence for your movement, you’re going to conserve the available air and be much more efficient and effective fighting the fire. While we can’t simulate going into a burning building (outside of a couple of standard training exercises), I tried to recreate some of the same physical stressors by having firefighters perform snatches and swings in tandem with bodyweight movements that mimic what they might experience on the fireground. We also added in some renegade rows, goblet squats, and pushups. After several sessions, they managed to perform 30 minutes of fast, hard work on a single tank. From an air management perspective, we had achieved everything I’d hoped for and more.

And this accomplishment didn’t merely provide physical benefits, but also a psychological boost. By making the training as demanding as anything they would encounter on a call, we were able to build confidence and make our firefighters feel more prepared both physically and mentally. When you can empower somebody by teaching them a skill, having them master it, and then loading it with speed and weight, you give them a newfound capability that lateralizes over into their job performance and other areas of their life.

Train the program below 5-6 days per week. Do not do Program A days back to back.

The Life Changing Power of Being Strong First

On the opposite end of the spectrum from our newly minted firefighters are our veterans who’ve devoted their entire careers to this vocation of serving the safety needs of the public. As I shared with  James Geering on his podcast Behind the Shield, we experience a lot of trauma and ongoing, chronic stress that accumulates over time. In fact, when I joined the department the typical firefighter only lived another ten years after retiring. This motivated me to change physical training for the department in a way that would result in better quality of life after stepping away from this career.

Kettlebell training isn’t a cure-all by any means, but if we can get people moving right, sleeping right, and recovering right—in addition to seeking counseling to address their trauma so they don’t turn to self-medication with drugs or alcohol to numb their pain—we can create a holistic, 360-degree approach. I’ve devoted the past 16 years to developing a system that isn’t just about better physical performance, but ultimately giving my colleagues another 20 years or more of vitality so that they can enjoy a long and healthy retirement with their families. And the kettlebell is at the center of this protocol. 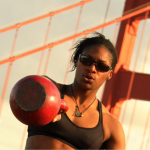 Women’s Fire Academy Training Program
This program uses full body movements to build usable strength. While it is aimed at women working toward the fire academy, I also used it to successfully train for a Spartan Beast. 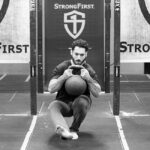 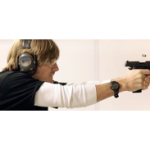 The Similarities Between Kettlebell and Firearms Training
I’ve been training with kettlebells since 2005. I’ve been doing firearms training even longer. My experience with both led me to the conclusion that there are a lot of similarities between the two. 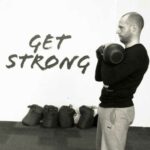 Why You Should Consider Adding Kettlebell Carries to Your Training
Loaded carries are rarely a staple in a group or individual training programming, despite the fact that kettlebell carries provide unique advantages for both settings.
Zar Horton 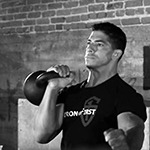 Zar Horton is a 31-year veteran of the Albuquerque Fire Department currently serving as a Battalion Chief. He has been training others in the use of kettlebells since 2004. For the last 16 years he has devoted himself to bringing safe, functional, strength training and fitness, along with greater quality of life and longevity, to fire service, law enforcement, and our military members. He currently holds position of Master Kettlebell Instructor with StrongFirst. He has instructed across the United States and internationally.

9 thoughts on “Kettlebell Training for the Fire Service”