Up until 45 years ago, the overhead military press was actually the third event in Olympic weightlifting, along with the snatch and the clean and jerk. The military press was considered the main yardstick for measuring strength. When athletes wanted to challenge each other, they did it with a military press attempt. There was no asking, “How much do you bench?”

Back then, shoulder injuries were also very uncommon. They didn’t even know what the rotator cuff was, and, in fact, there is no mention of it in the kinesiology textbooks of that time.

Starting from 1972, when the military press was removed from the weightlifting events, the bench press and other exercises witnessed a gradual increase in use, up to the level of abuse and to the detriment of the military press. I don’t exactly know why this happened, but I know for sure that this approach leads to strength imbalances, which can then lead to acute pain and serious injuries. 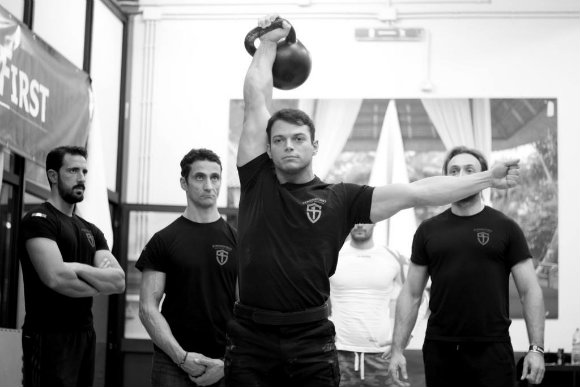 I often hear people say things like, “My leverages don’t allow me to be successful in the bench press,” or, “My bench press doesn’t improve.” My solution for them always the same: to press overhead, ad nauseam!

So our problem is two-fold—avoiding shoulder injury and building our bench press—but our solution is singular, the kettlebell military press. And we have the evidence to back it up.

The Anatomical Reasons We Need to Press Overhead

The bench press, when performed correctly, is an excellent exercise for the upper body, but alone it doesn’t suffice to ensure a correct balance of forces.

It’s interesting, in this regard, to note how a weakness of the serratus anterior and middle trapezius muscles, as well as a lack of coordination between these two muscles, is associated with sub-acromial conflict syndrome, also known as sub-acromial impingement syndrome. This syndrome can result in pain, weakness, and decreased range of motion. It should also be added that scapular adduction causes a predominant action of the rhomboid muscles, which further inhibit the cooperation between the serratus anterior and the middle trapezius muscles.

Hence the need—in my opinion it should be mandatory, and the data extrapolated from various studies shows it—to press overhead, and therefore to utilize the military press. The military press involves the coordinated action of the serratus anterior and the middle trapezius muscles, which together lead to the proper rotational action of the shoulder blades.

Strength Is a Skill

Our goal is to become strong in an absolute sense, and remain so for a long time. In my opinion, being strong is not only about having the strength to do certain things. Rather, you are really strong when your strength can be useful in a variety of endeavors, it protects you from injuries, and it allows you to do what you like, for a long time.

We can learn how to be long-lived.

“Learn as if you’ll live forever.”—Gandhi

The Kettlebell Military Press vs. the Barbell Version

The kettlebell pressed overhead from the rack position helps the shoulders to stay packed and move according to optimal biomechanics. This enables an optimal lockout overhead, and thereby helps to develop strong and healthy shoulders. 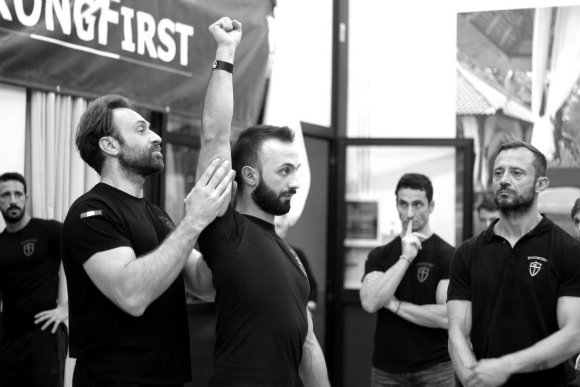 In deeply studying the kettlebell military press, I have concluded that it represents an excellent choice when it comes to transfer to the bench press, as it allows the practitioner to cover the entire range of motion of an overhead press, and it involves in totality, thanks to the lockout, the muscles of the upper back, including the para-scapular muscles and those of the rotator cuff. I believe the kettlebell military press is essential for the harmonious development and coordination of the shoulder joint district.

There are three factors that make the kettlebell military press the best way to develop overhead strength:

This study was done with the intention of demonstrating the importance of adding the hard style kettlebell military press into bench press strength programs. The end numbers show that, by inserting the kettlebell military press, significant results were obtained in the bench press, also ensuring a balance of strength that is typically lacking in cases where the bench press is used exclusively for the upper part of the body.

Don’t think it was easy because of that, though. The athletes faced a huge amount of very demanding and increasing work. By the fifth week, during the heavy session, they had to perform a total of 150 military presses. A huge amount of work!

Press a lot and you will press heavy, which will make you happy. In fact, as we all know, the meaning of life is “press heavy weights overhead,” right?

We must feel good, be happy, and continue to cultivate our passions in a healthy environment. Enjoying our time practicing our kettlebell military press is one way to achieve these objectives.

Be strong and be happy!

Shoulder anatomy graphic by OpenStax [CC BY 4.0], via Wikimedia Commons. 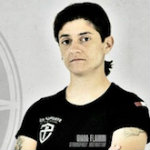 Giada Flamini is an SFG Level I Instructor and a powerlifting athlete with the Forma Club Team of Monza. She is a former professional swimmer and distance runner, and is a member of the Italian law enforcement. She has trained with the greatest athletes in swimming and distance running, and she now studies strength in all its forms.