We offer Plan Strong programming and only on the lifts listed, no exceptions.
If you are unsure, email us before making your purchase.

**This product is not for beginners.**

How strong do I need to be to qualify for a Plan Strong™ plan?

Get strong with the most powerful and sophisticated system in history—the method behind the Soviet weightlifting records.

Fill out a detailed application and within a week we will e-mail you a detailed state of the art eight-week plan for up to four lifts of your choice:

More power to you!

The brilliant minds behind the method passed away without systematizing it and until recently it existed only as a seemingly chaotic collection of training recommendations scattered across dusty textbooks and journals.

StrongFirst® worked for several years connecting the dots and meticulously dissecting the method to its smallest components. At last all the pieces of the puzzle fit and we were able to rebuild and, for the first time in history, codify the system. Plan Strong™ was born, like a T-Rex grown from a DNA sample trapped in amber.

The results were spectacular. Plus, the athletes found the process every bit as satisfying, discovering what strength legend Yuri Vlasov called the “muscle joy”.

But Plan Strong™ had a downside: it took an experienced coach four hours to write an eight-week plan. That made the system elitist—and we wanted to bring “power to the people”. So we developed exclusive software to help the coach behind the screen to make the complex calculations. A machine cannot replace a human—but it can free him from the tedium to allow him to focus on the art. 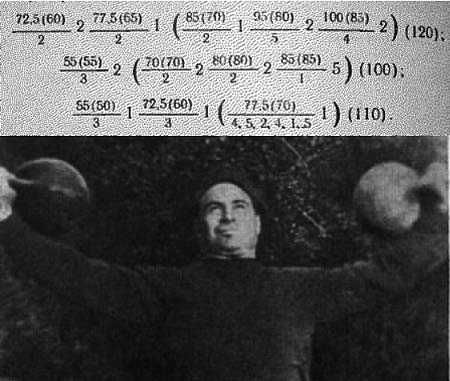 Fill out a detailed application and within a week we will e-mail you a detailed, state-of-the-art eight-week plan for up to four lifts of your choice:

Enjoy the benefits of the system:

More power to you! I started following a Plan Strong program in April 2017 with the expectation of making up for last year’s failure when I attempted the Iron Maiden Challenge. In 2016 I failed the pullup, my weak lift.

When I started the PS plan, I could barely complete one weighted with 18kg (with bad form), one pistol with 20kg and one press with 24kg. After 8 weeks, I could do a weighted pullup with 24kg (perfectly executed) and a pistol with 24kg. But what really surprised me was that I could press 28kg for a solid rep. And, of course, I accomplished the Iron Maiden Challenge! I have been using Plan Strong programs for a while because they work. My last 8-week PS plan improved my deadlift from 230kg to 250kg [507 to 551lbs.] and my squat from 180kg to 190kg [396 to 418lbs.]. I also moved up from attempting to military press the 48kg kettlebell with uncertainty to being able to complete two solid reps with it.

The solid foundation of strength that I had created also allowed me to accomplish the S&S “Sinister” goal—training only a few weeks for it! I have been following Plan Strong plans for a while now, because they give great results, and because, honestly, I enjoy them!

The first 8-week plan took my kettlebell military press 1RM from 24kg to 28kg and my weighted pullup 1RM from 28kg to 32kg. My strict bodyweight pullups went up from 14 reps to over 20.

I am now following a Plan Strong military press program and after a couple of weeks, out of curiosity, I tested my RM with 24kg. To my great surprise, it had increased by two reps!—from 4 to 6 on my left and from 6 to 8 on my right. My deadlift went from 420 to an easy 440 in 4 weeks. This program was simply more enjoyable. The constant waviness in the loads, sets, reps, etc. allowed me to focus purely on the technique of the lift rather than the weight on the bar. As far as straight results go—no other program has yielded that much success in such a short amount of time. My student Akira, an experienced 145-pound lifter improved his bench press from 275 to 300. My students’ results: Ward Hamilton’s deadlift went from 420 to 535lbs.; Colin Barden’s weighted pullup from 70 to 115lbs. in 3 months. Far and away the best programming methodology I’ve used. My student Jeanie Shellman is an Oregon state powerlifting champion and record holder in USPA sub-masters’ division. Using Plan Strong and SFL principles we took her squat from 230 to 275, bench press from 145 to 200, and deadlift from 225 to 405lbs. in 18 months. Plan Strong was the most unique and informative programming material I have ever been exposed to. Not only does this methodology of programming deliver outstanding results, it also offers the perfect balance of variability and continuity to keep training both fun and focused.

One case study is my wife Mira, whose sport is weightlifting. We have been using programming inspired by Plan Strong for her (specifically her squat programs) for a few years now. During that period, she has progressed from being competitive at the local level all the way up to earning 1st place finishes at Master’s Nationals and Master’s American Open! Her next goal is to compete at Master’s Worlds for weightlifting, hopefully in 2018 … if she keeps progressing at this rate, she should make it onto the podium and be a strong contender for gold!

I only wish I had found this material sooner!

How strong do I need to be to qualify for a Plan Strong™ plan?

There is no lower limit for barbell or kettlebell lifts. However, in kettlebell lifts, if your 1RM is less than or equal to 24kg, for instance, you will need to have available kettlebells with jumps of 2kg between sizes (e.g. 10kg, 12kg, 14kg, 16kg, 18kg, 20kg, 22kg).

For pullups, dips, and pistols, consider your 1RM as the sum of your body weight plus the overload. To be eligible for a plan, 70% of your 1RM must be equal to or greater than your body weight. If your strength is not yet at that level, please start with the StrongFirst Bodyweight Fundamentals.

In all lifts, competent technique is a must.

Please make sure that your one-rep maxes are recent and accurate. You need to test your actual 1RM; do not estimate it using some formula.

Can I pursue endurance training or train for a sport together with Plan Strong™? If yes, are there specific guidelines?

Yes. Ideally, strength and endurance work should be separated in time as far as possible. And the more taxing the training is, the more important this separation is—and vice versa.If you do “easy endurance”—an easy 30-40min run, S&S 10×10 swings, etc.—feel free to do your Plan Strong™ lifting right before or after. If your endurance work, aerobic or anaerobic, is more demanding in nature— a 90min run, TSC or SSST snatch work, a hard martial art practice—you need to rest. The following rules apply. Do not do demanding endurance training within 24 hours before heavy strength sessions with >85% 1RM weights and 24 hours after hypertrophy focused sessions with a higher volume and lighter weights. In other words, heavy strength work demands freshness on the front end; hypertrophy needs rest on the back end.

Most PS session are between the two extremes, so 12 hours will suffice. Understand that your body has limited adaptive resources. Several games of tennis or BJJ lessons a week are not going to slow down your strength gains and might even accelerate them—but training hard for either sport will. And full commitment to an endurance event like triathlon even more so. A serious endurance athlete very much needs strength training—but he or she must accept the necessity of reduced volume and slower gains.

Can I combine hard swing or snatch training with a Plan Strong™ kettlebell military press plan?

Yes. That would make a fine minimalist training template. But make sure to take it easy on everything else: a couple of get-ups, a few goblet squats…

Theoretically yes, but, unless you are an experienced strength coach, it is too easy to mess things up.

What if I miss a training session?

Just do it the next day and then continue as planned. The important thing is to fulfill the week’s load by the end of the given week but you do not have to do it on the preplanned days.

What if I get sick and I miss a week or more of training?

Go back a week or two and keep going. Make sure to start over at a relatively easy week.

What if I fail to perform the numbers of reps or sets prescribed by the plan with a given weight?

Either reduce the load as described above or just wait an extra day. Fulfill the week’s load by the end of the given week.

What if I can complete all of the prescribed sets and reps even too easily?

Be happy that you are getting stronger, restrain yourself from doing more, and have patience until your strength test in the end of the cycle. You may reduce your rest periods slightly but do not turn the session into density training.

It is weird: some Plan Strong™ days are quite hard and some are ridiculously easy and I want to do more. Should I?

No. Do not be tempted to add “finishers” or similar nonsense on the easy days. They are purposefully easy; there is a method behind the madness. Ignore your feelings and trust the system.

Why shouldn’t I push my reps to failure?

Decades of Soviet experiments on strength athletes of all levels have demonstrated that training not to failure is superior. If you want to understand why and learn what is “under the hood” of Plan Strong™, please take the seminar.

How much strength should I expect to gain with a Plan Strong™ 8-week plan?

Will I lose fat with this plan?

You might get a little leaner but do not count on it. Fat loss is not the goal of Plan Strong™.

How long should I rest between sets?

Rest periods between sets must allow sufficient recovery to repeat the performance. You should neither be doing a “met-con” nor taking too long rests. Resting 3-5 minutes between sets hits the right spot.

If you are training more lifts in the same session, one option is that of training two lifts at the same time, alternating a set of one with a set of the other. This will allow you to take advantage of the rest after a set of the first lift to perform a set of the second, and will dramatically shorten the duration of your sessions. Of course you must select wisely the lifts you wish to alternate, making sure that the execution of one does not interfere with the recovery of the other. Usually alternating an upper body lift with a lower body lift does the job. (e.g. squat and pullups, deadlift and military press, etc.)