Am morphing more and more into a DeLorme HIT protocol, de-emphasizing the middle set of three and pounding in the last set. Getting in more reps with heavier load. Using Rest/Pause anywhere there is a lock out in the lift, otherwise Dropsets.

Am now at 197lbs bodyweight and need to take in my belt. 52nd Bday at end of this month, want a good progress pic!

Keeping with it, using the second set as a prep at higher loading. Swapped R/P for dropset on the OHP, hit a PR on the sissy squats for 15, am not looking forward to increasing weight on those...
Numbers or weights continue to incrementally advance, and with it I'm slowly crawling toward 200lbs bodyweight. Have regained all I lost on vacation and hit 198 this morning. Took my weight before and after working out today, 3 lb difference.

Weights are jumping a bit now that I'm dialing in some of these new addition lifts. Loaded PUs and Upright rows coming along faster than I expected. 198lbs this morning, a PR for lean bodyweight.

Made it to 200lbs bodyweight today, the heaviest I've ever been and same belt size for the last 15lbs. Mostly in my lower body, I can feel it in my legs/glutes/calves, my jeans haven't felt this tight since the 80s

North Coast Miller said:
Made it to 200lbs bodyweight today
Click to expand...

North Coast Miller said:
Made it to 200lbs bodyweight today
Click to expand...

WhatWouldHulkDo said:
I remember when I first crossed 200#... back in 8th grade
Click to expand...

In 9th grade I wrestled in the 98lb class. Pretty sure they don't even have a weight class that low anymore...

It hasn't been easy, but taking my time definitely made it less difficult. Now for the hard part I need to really consolidate - I'm not moving the loads I should to own this bodyweight, but I'm getting there.

Continuing to emphasize the last set. I am amazed a bit that this is producing the results it is, even though I've been drifting this direction for many weeks now. Essentially I'm doing 12 working sets per week, the rest have some volume and a respectable RPE, but by themselves would be not very effective.

At some point I'll have to dial it back to some Cluster Sets done with relatively easy loads.

A few thoughts about this - have been NOT looking at my notes except to see what weight I used last time for my initial set.
-So the 1st set to tech failure (or 1 rep in reserve) is a genuine effort.
-The second set is done at heavier load (6-8 RM for upper body, 8-10 for lower body) but fewer reps, half of what I suspect is my max - if it feels real heavy I might do two or three.
-Last set is done to tech failure (no reps in reserve) followed by two or three rest/pause repeats or drop sets - rest/pause where there is a lockout, drop sets where there isn't a lockout. Not having my notes in front of me, I never know exactly how many reps I hit last time, so I'm inclined to really give it that "honest effort" because I don't want to see a lower number than last time - whatever it might have been.

As mentioned, this is prolly not sustainable in the longer term, but at reduced volume and frequency it is a lot less troublesome than one might think. latest progress pic - I'm going to say this is my 52nd Bday pic as its only 2 weeks away, starting to make my avatar look like a pipsqueak: 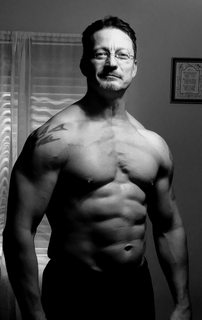 I'm not an aesthetics guy, but... dyaamn.

Good on you, sir.

I don't think of myself as an aesthetics guy, but when I'm adding weight it should look like its going where it does some good. I'm kind of amazed that I'm getting such a solid response both in size and my weights- although its tough to draw comparisons to conventional lifts.

Was a little surprised to see if I equate my loaded pushups to benchpress, the repmax chart predicts a BP close to 300lbs.

I need to get a month in a gym to see where my big three are from years of training at home with non standard gear.

Somewhat interesting, dragged out my scale to get a better handle on how much weight I'm actually moving when doing my loaded pushups.
Bodyweight = 135 arms extended, 155 at the bottom. This difference tracked perfectly with a 70lb bag on my back to = 205 to 225, meaning the 95lb bag = 230 to 250. That translates to a pretty good bench with an 8-9 rep max at that weight. Somewhere around 68% of bodyweight at the top, and about 78% at the bottom. This is a little higher than commonly reported.

Changed it up a little, playing around with my rep and weight numbers on the first set. Today went with a longer set of lighter loading to near a 20 rep set maybe two to three reps short of failure. Seemed to affect my last set not so much (in fact held steady or increased) but really felt it on the first and lingering on the second.

I see that while I haven't been here you went form North Coast Miller to North Coast Hulk.
Nice progress!

Mirek said:
I see that while I haven't been here you went form North Coast Miller to North Coast Hulk.
Nice progress!
Click to expand...

Lol, Thanks!
I've crossed 200, firmly into uncharted territory. I was going to drop back down to 195 and thin out my midsection, but if I can hit 205 and drop down to 200 would be better.

My body's gotten with the program and retaining weight, but I'm having a tough time keeping the intensity levels up to ensure most of the weight goes on lean - translate "my belt is finally starting to feel tight".
You must log in or register to reply here.
Share:
Facebook Twitter Reddit Pinterest Tumblr WhatsApp Email Link
Top Bottom