Mark Rippetoe on Women in Combat

Anyone have thoughts on this? I like Rippetoe when he is talking about how to pick up heavy stuff, but increasingly he seems to open his mouth when he knows not what he is talking about. Whatever gets the clicks and views, right?

I think the thing that is most frustrating about it is that this year we saw two very extraordinary women complete one of the toughest infantry courses in the world and that accomplishment isn't even acknowledged. There's some who point out they went through recycles, which are not common but also not unprecedented, as proof they were given special consideration. Well, it also means those women essentially went through the course twice. They are tough and strong and they proved a lot.

This whole article just feels like yet another person who has never offered himself up to be tested in combat trying to say which groups aren't cut out for it because of supposed weaknesses in mind, spirit or body. The people before him who said that about African Americans, interned Japanese in WW2 and more recently homosexual soldiers were all proven wrong and I expect Mr. Rippetoe will be, too.

I myself was a ranger school recycle along side SEALs and Marine Recon toughs. Recycling is not a knock on earning a tab...at least it wasnt in 99. The danger is in the lowering of the standards to get a "pc" result. I believe there are plenty of women tough enough and strong enough to pass the course. However, I will say this: War is combat and combat is killing, period. The training and employment of killers should never be subject to political correctness or treated with "kit gloves." I think his point, however roughly he got there, is that women are not as strong as men, on average, all things being equal. Some people call prostitution the oldest profession, I think soldiering is the oldest profession. Throughout human history the male of the species has conducted wars and done the violence. In Sparta, women exercised and ran and wrestled, but they were not put on the battlefield. Those women who got their Ranger tab should be proud, its quite an achievement. I still think, humbly, and without malice that the killing should be left to the guys. I hope i do not offend.

U.S. military opens combat positions to women - CNNPolitics.com
Well, no need to theorize anymore.
It seems like the people facing combat and risking it all for the country should have a greater say in the decision (like the Marines tried to, as mentioned in the article), but then you also have to consider that 70 years ago, the greater say of servicemen may have been to keep people out of integration based on ethnicity. It's like what JZB said: that anyone who hasn't offered themselves up to be tested in combat shouldn't be deciding what the best policy is for integration. But then, what if the majority who have been in that situation are opposed to integration? I don't know if they are. I've never been in the armed forces so I'm in no place to give an opinion based on my "feelings" about it, whether geared towards "equality and progress" or "tradition".

JZB said:
Women in Ground Combat | T Nation
Anyone have thoughts on this? I like Rippetoe when he is talking about how to pick up heavy stuff, but increasingly he seems to open his mouth when he knows not what he is talking about.
Click to expand...

Article was about women in combat, and lowering strength/fitness standards to 'include' them. IN GENERAL, I'm afraid women ARE much weaker than men. This is a thing actually. There maybe rare instances where a woman could meet the standards.

nope, women are generally not as strong as men . . . this alot has to do with their private parts(joke), hormones, etc.

One or two women passing a course or fitness/test: Great, good for them. They are outliers and actually prove the points made in the article that you are refuting.
Don't get me wrong, probably ALOT of weak men who can't pass the same course (especially THESE days):

The other thing to consider, is men respond to training better (Strength, endurance, etc).
So there's an efficiency thing as well:
. . . just say . . . (numbers aren't exact, but principals laid out here)
-say 50% of the men fail the course the first time.

-of the 2% of women who pass . . .those women probably had to train their a#@ off to get to that point. Or had some base level of fitness, strength that is very uncommon to most women.

US soldiers attacked by Taliban. Fast Forward to about 1:00 in for cluster f%^#.
120mm mortar shell weighs 30 lbs.
Think about the re-positioning of the mortar, cranking the elevation level as fast as possible, moving around quickly as possible in body armor & helmet, the mass confusion and choas here. . . . Lives depend of this stuff (strength, phyical abilities, etc) 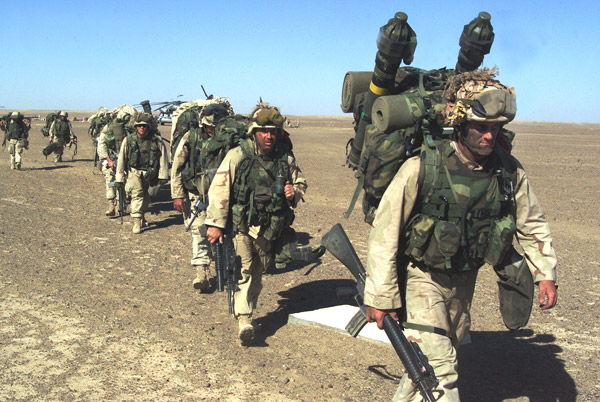