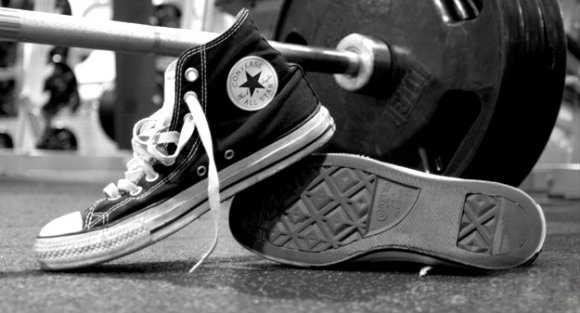 Folks, Converse has announced an upgrade to their classic Chuck Taylors — the first such modification in 98 years. This new version appears in stores starting today.

Among the changes:  CUSHIONING.

It’s true. But before getting all Ron Swanson-channeling-Bobby Knight about it, let’s take a deep breath and examine the situation.

Chucks have long been favored among lifters for their no-frills, retro-cool style and flat, inflexible (un-padded) sole, which was difficult to find, prior to the modern barefoot/minimalist revolution triggered by Born to Run and brands such as Vibram (Five Fingers) and Vivo Barefoot, and which then moved quickly into the mainstream. For decades prior, the simple-as-can-be Chuck Taylors reigned in the parks and gyms and are still as ubiquitous as ever.

The Problem With Cushioning in the Chuck Taylor Redesign

The designers were careful to change very little about the external appearance, but the newly-cushioned sole is a soul CRUSHER in our strength-training world.

Why? Because it disperses and displaces energy. The connection between yourself and the ground must be solid — no gaps, no squishy room, no “other” place for the force to go but to exactly where you “tell” it to (the implement). How much more difficult would it be to press a bar or bell overhead if you first have to compress all the foam beneath your feet before anything else happens?

Plus, it’s safer, allowing for greater proprioception. Our feet were designed to give us feedback about the environment, not be blinded from it. Arches and the common fallacy of arch support are yet another component to this — but that’s a discussion for another time.

In any case: A legion of strength enthusiasts and culturists will not be among the converts to this squishy new model.

Not a Replacement… Yet

We are assured that the Chuck II will not replace the original… at least not yet. For now it’s merely an addition to the line.

If the new design is a hit and outsells the original, we can expect some boardroom discussions, to be sure. Our team of speculators are forecasting a 79% probability of the eventual discontinuation of the classic Chucks, in the wake of a successful Chuck II launch. #veryveryscientific

The Intersection of Performance, Style, and Culture

We are champions of substance over style, so if the substance (or lack of in this case… read: cushioning) is replicated elsewhere, then have we become a bunch of crybabies griping about style? Over the past six years, the market has exploded with minimalist shoe options with thin, flat soles — perfect for lifting. (No, we will not attempt to list them all here.) So maybe the Chuck Taylor devotees should just suck it up and stop throwing chairs and give the NB Minimus or whathaveyou a chance (and many of us have already — see the below comment about toe-room).

But still, if and once the classic Chucks are discontinued, we will have lost a little piece of tradition and nostalgia, not to mention an iconic (and affordable) old-school Americana style represented in gyms across the nation (if not the world), as one of the few styles of ANYTHING, EVER to so seamlessly and successfully span both genders and generations. This characteristic is quite fitting, in the context of their gym use — StrongFirst methods of training being scalable for, and perfectly indiscriminate of, age or gender, even of one’s era. They are universal. The principles are everlasting. Is the Chuck Taylor a “footwear” representation of this? Stop to consider how amazing it is, that an apparel item of one specific style could be every bit as appealing to a typical eight-year-old girl as it is to a typical eighty-year-old man. I mean really.

Tradition, Though — Does it REALLY Matter?

Maybe it’s silly. Or, maybe there is something pretty cool about matching a photo of yourself or of your offspring to one of a great-grandfather or great-grandmother, performing the exact same exercises in the exact same athletic shoe. Barbell, kettlebell, and bodyweight strength training have been around a LONG time, and are here to stay. Chuck Taylors have already been around for 100 years, and it seemed like they just always would be. I mean, they’re a piece of canvas stitched to a slab of rubber with a toe cap, for goodness sake, and that’s really all that we have needed from a foot-covering. (Extra toe room for the wide-footed among us, notwithstanding.)

Chucks have been one of those few simple and enduring constants, among such mainstays as the perfection of 5×5 or even of the deadlift itself. A silly, perhaps, but still very real connection to history. To our history. To the un-fancy and the un-complicated. To a thing that, in the lifting world at least, AIN’T broke and does NOT require “fixing,” man.

So, considering all of the above, a few response options are left available to you.

Scream, stomp your feet, start a petition, write letters, kick sand, do whatever you can to ensure the original design remains in stores forever and ever. Your battle cry? “SAVE THE CHUCKS!” (By the way, yes, you are a big dramatic crybaby. But we totally get it.) 79%…

The originals ARE still available, so if you just cannot handle the idea of life without them, why not stock up now on several extra pairs? #logic

There really are like dozens of alternatives out there now, and you don’t have to spend upwards of $150 for some great (and great-looking) zero-drop minimalist training shoes. No, we don’t want to be forced into this option, but it’s still a fine option.

4. Break out the Scalpel

Maybe the inner liner/padding can be stripped out? Someone check that out and let us know in the comments.

Build/start your own gym, without a footwear requirement. (Hey, we are listing ALL options here, not just the “easy” ones.) *wink*

Chucks do look cool, but barefoot training still rules. That said, of course we would prefer that the classic product will be here to stay. 21%… we’ve seen worse odds.

SFG Team Leader at Strong First
Nikki is an SFG Team Leader in Venice Beach, California and is the former Marketing Director for StrongFirst (2013-2018).