A press is like an iceberg—there’s a lot going on underneath the surface.

What can you learn from failure? A lot. Especially when it comes to dialing in a heavy press. Used wisely, failure helps you focus on improving your skill by looking at all the parts that feed success. One man shares seven pressing “problems” that kept him from pressing half-bodyweight and the programming tips, tools, and drills that earned him his SFG II.

“Don’t fear failure. Not failure, but low aim, is the crime. In great attempts, it is glorious even to fail.”

In February 2017, I was in final preparation for the Pacific Northwest SFG II certification. I was already hooked on the StrongFirst system, having passed both my SFG and SFL in 2015, and had been training the SFG II skills almost daily for about six months. All skills, both Level I and Level II, felt dialed in and ready to go.

I started my pressing program with a simple linear progression, working up from the 24kg with an increase in overall training volume (pressing 3x/week for 20-30 reps each side with progressively heavier weight). I used various Platemates (magnetic mini-weights that would “hang” onto the side of the kettlebell) to gradually increase the load so I could train heavier than the 32kg bell once I felt ready to do so.

Two months out, I could press 35.14kg (a 32kg kettlebell with a couple Platemates attached). I figured I was in the zone for the 36kg if I just kept at it a little longer.

If this were a Rocky movie, this would be the “overconfident” phase where the protagonist assumes it will all just work out somehow. The end of Act One.

Arriving in Portland the day before the certification, I hadn’t actually pressed the 36kg yet. My attempts in the weeks leading up to that day were unsuccessful. Somehow I was still confident it would “just happen” on the day. I was relying on adrenaline to get the remaining 0.86kg I needed.

I’ve always needed a long warm up before pressing heavy, so I still thought I had a shot. Unfortunately, I didn’t. My second and third attempts on both arms came a little closer, but not close enough to bust through the sticking point.

I still had an entire weekend of practice and testing to come (not to mention a snatch test starting in about 10 minutes) so I decided at that point to conserve my energy. I was already obsessively running through what had gone wrong in my preparation.

This is the moment of reckoning that results in humility and self-reflection. The end of Act Two.

The week after the cert, I deloaded and decompressed—sort of. The only thing I could think about was this confounded press. I spent the entire week stewing, researching, and formulating a plan of attack for the next couple of months to get this thing done. After, I met with my coach, Master StrongFirst Instructor Andrea U-Shi Chang—owner of Kettlebility, a StrongFirst Accredited Gym in Seattle, Washington—to troubleshoot and formulate a better plan.

She had me press the 24kg, 28kg, and 32kg kettlebells, and then attempt the 36kg while she closely watched. Andrea zeroed in on three things.

I was rushing out of the clean and trying to blast the bell up too quickly. Why? Because I wasn’t comfortable holding such a heavy bell in the rack for any period of time. So I panicked to get that heavy thing up and off of my body—fast.

I also wasn’t cleaning to a great starting rack position—I was trying to counter-balance the heavy bell by flaring my elbow out to the side. I was wasting precious time getting into a good vertical elbow position before pressing.

And I was losing tension throughout the grind—especially becoming a “wet noodle” at my sticking point. I thought I was maintaining my cylinder from the clean to the rack to the press. But I wasn’t. Andrea saw it and called me on it.

Rather than simply identify faults, we designed a new plan for the next couple of months to address my heavy pressing issues.

As we say at StrongFirst, your press is only as good as your clean. In the SFG Level I manual, there’s an important line (they’re all important) that states that you need to tighten your whole body on impact from your feet to your quads, glutes, abs, and lats before “pushing yourself away” from the kettlebell.

To train this, we used heavy cleans and squats 2x/week with 40kg and 44kg (one to two bell sizes higher than my press bell target). One swing, then two cleans, and then three squats; repeated three times on each side. This is one of Andrea’s tried and true, go-to protocols along the path to a max press. Once I was comfortable holding the 44kg in the rack for 30 seconds, the 36kg felt like a paperweight (sort of).

Wasting too much time adjusting my feet after the clean, I was unnecessarily increasing my time under tension with a heavy bell. I also wasn’t stacking my hip under the bell.

Instead of cleaning with my normal swing stance, we adjusted my foot position so I started in my press stance (much narrower)—I didn’t have to adjust my feet at all. Yes, it felt awkward at first. But I got used to it. We also drilled stacking my hip (a subtle but important weight shift) under the bell prior to pressing it.

“You cannot shoot a cannon from a canoe.” I needed practice staying tight through my sticking point for as long as it would take. We added hard style planks prior to training sessions to dial-in the tension I’d need for pressing.

I also performed heavy one-arm swings, to help with anti-rotation and my vertical plank. I used swings for strength and power production, not for conditioning—five reps at the top of the minute for 30 minutes with 44kg 1-2x/week.

I wasn’t maintaining a vertical forearm and “rocket boosting” up from the elbow. So we added bottoms-up training with lighter bells (12kg-16kg) prior to each training session to reinforce the pressing groove with a vertical forearm. A “spice” rather than the “main dish,” it was a great way to start each session.

To address getting through the sticking point, we added two things:

A) Push down partner drill with 12kg. This remains one of the most heinous things Andrea has ever had me do—another one of her battle-tested favorites. A partner stood over me on a stool while I pressed a light bell, keeping it from moving just prior to, at, and just after my sticking point—before letting the bell continue up to lockout. I did this 1x/week for three sets of two to three reps.

B) Stair-step drill with 24kg. No partner required, thankfully. Using a 24kg bell, I would press to various positions and hold for five seconds before stepping back down to the previous position, and then pressing up to the next step. I did this 1x/week, performing three sets of single reps on each side.

Jumps between bell sizes can be used to your advantage. Andrea had me put the Platemates back in the closet and instead do heavy negatives 1x/week (two to three reps/each) with a 40kg bell. Since I couldn’t yet cleanly push press the 40kg kettlebell, she actually had me push press it up with two hands.

For more information on why the jumps between bell sizes can work in your favor, read Pavel’s post. From a barbell perspective, you can read all about the pitfalls of “baby step” load progressions in Fabio & Pavel’s new ebook Reload.

“To press a lot, you must press a lot.” In addition to the accessory work listed above, we knew I needed to get under some heavy bells. We started with heavy, pause 1/2 getups—10 second pauses at the elbow, the hand, and the elbow again before switching hands—aiming to do as many as possible in 10 minutes with good form. I eventually built this up to 2x/week using a 44kg bell for six rounds on each side.

And in the six weeks leading up to my retest day, I did Soju and Tuba with a 32kg bell (a step/wave hybrid cycle), eventually building up to six sets of three reps prior to tapering and testing.

Andrea was my Apollo Creed (Rocky III). She was bringing me back to life from a stunning defeat. By this point I was eating and breathing the process.

It’s now June 2017 and I had been working the plan for a little over 12 weeks. I trusted the process and all the work I had put in. After a short taper of a couple of days, I felt ready to attempt the press again for the first time since February.

When I setup to clean the bell this time, I didn’t fear the weight on my forearm or the sticking point. I knew I could do it. After my solid clean, zero footwork, and plugged tension, the bell shot up with very little slow down—and I screamed at the top of my lungs like a little kid (seriously).

Arms up in the center of the ring, crowd cheering, credits roll. Act Three over. Movie over. Rocky overcomes the odds.

About six months later, in January 2018, I was coming off of eight weeks of Strong Endurance™ 044 (heavy snatches). I hadn’t pressed heavy since my retest preparation—I needed a mental break. I started SE-044 with a 28kg bell. On Pavel’s advice, I bumped it up to 32kg, doing five reps every 60 seconds instead of every 30 (I would eventually bump up to the 36kg).

One morning, after 120 snatches with 32kg, I stood over the 36kg kettlebell knowing I could press it easily, despite the total absence of pressing in my program. It had been a full six months since I had pressed heavy, but that bell went up easily on both sides. When I let Pavel know about this, he confirmed that there had been a number of military press PRs reported with this plan.

Looking back with what I know now, not making that original press was a gift, not a failure. If I’d made it, I could have stayed oblivious to all those leakages that kept me from getting truly stronger, rather than just lifting more. Strength really IS a skill. And since you can’t always see/feel what needs improving, even coaches need coaches. 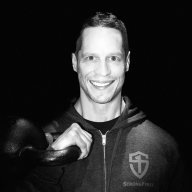 Mike Torres has been training in the StrongFirst system since January 2011. He is a StrongFirst Team Leader and has achieved Elite status after having completed all four certifications (SFG, SFG II, SFL, and SFB). He trains out of Kettlebility in Seattle, WA with Master SFG, Andrea U-Shi Chang. Having studied martial arts since childhood, Mike also holds multiple black belts and instructorships in traditional and reality-based arts; he currently trains in Gracie/Brazilian Jiu-Jitsu at Framework BJJ.

Mike believes that physical, emotional, and mental strength are intertwined and natural precursors to one another. Generally, someone who’s been able to overcome adversity with repeated success in the gym or on the mat will be ready to do so in an office, a relationship, or a classroom. That’s the kind of “real strength” that is developed through the continued search for mastery of the human body.

Mike spends his days as Director and General Manager, Kindle at Amazon.