A few years ago, a strange idea emerged from the clinical world: the insect head. White coats started telling lifters to lock their heads onto their torsos during hip hinge lifts — deadlifts, swings, cleans, and snatches, both barbell and kettlebell.

I urge you not to get bogged down by the science and the pseudo-science of their arguments. Instead, ask yourself these two questions.

1. Is there an epidemic of neck problems from the traditional technique — the head up and the neck in extension — among powerlifters, weightlifters, and hard style gireviks?

The answer is: No.

Sure, some athletes from any sport have neck issues, but good luck correlating them to neck extension in hinge lifts. Some powerlifters have neck problems — mostly from driving the head hard into the bench on the bench press. Some weightlifters and gireviks tweak their necks — usually by whipping them inappropriately. But from a simple act of keeping their heads up, the way they have been doing it since they were crawling babies? I do not think so. 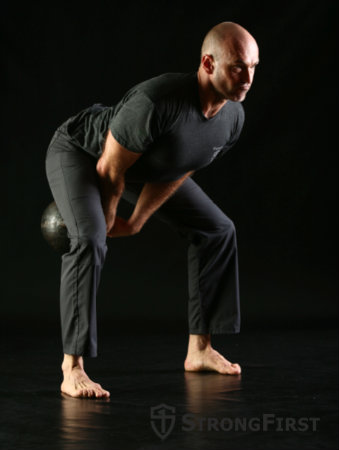 Brett Jones, Master SFG, has pointed out that some folks can have problems when their thoracic extension is limited. The neck has to compensate to keep the eyes on the horizon and goes into hyperextension. Indeed. So what is the answer? Fixing the lack of mobility with professionally applied corrective exercise. Medical intervention, if there are medical issues.

The answer is not dumbing down the classic technique to accommodate dysfunction. That would be akin to our government lowering the PT standards for the military and firefighters when fewer recruits are able to pass the existing standards.

Indeed, there may be a particular medical case when the doctor tells the patient that he or she must keep the neck neutral throughout a hip hinge exercise. If that is your doctor’s order — follow it. But if this is a prescription for another patient, don’t you understand the risks of taking someone else’s drugs? Medical Rx for one patient ought to never be confused with the standard operating procedure for healthy people.

Now to the second question:

2. Has the new technique improved the performance of top lifters?

The answer is: for some. And the technique is far from being new.

Hugh Cassidy and Franco Columbu used it four decades ago. A review of championship deadlift techniques reveals a remarkable variety of head positions. Andy Bolton cracked the mystical 1,000-pound barrier with a neutral neck — he looks at a spot six to ten feet in front of him at the start of the pull. Lamar Gant, the first man to pull five times his bodyweight, 661 at 132 pounds, did it with an extremely hyperextended neck.

Moving your body into one position or another is often a trade-off. Extending the neck helps to activate the posterior chain — while weakening the abs and the quads. A talented powerlifter, with the help of his coach or just through great body awareness, will eventually figure out the optimal amount of trade-off for himself. (Only competitive powerlifters should do this. Recreational lifters and athletes from other sports should follow the Olympic lifting and kettlebell lifting guidelines below.)

Unlike the slow-moving deadlift, quick “pulls” (barbell or kettlebell) tolerate no variety in neck alignment. There is only one way — head up!

If a champion weightlifter cleans 500 pounds, you know he can easily deadlift a couple of hundred pounds more. That means his quads and abs are not greatly challenged by the first pull (the deadlift part of the clean or snatch). So robbing Peter (the posterior chain) to pay Paul (the quads and the abs) would be wasteful as Peter is the one doing most of the work in quick pulls.

The same applies to a hard style girevik. He has no trouble breaking the kettlebell off the platform and his spine is not crushed by enormous loads. His mission is to accelerate the relatively light kettlebell to 10G and it is the job of his posterior chain. So he needs to maximally reinforce it, and neck extension does exactly that. Lift your head up — extend, not hyperextend — on the bottom of your pull and your entire back side will immediately light up, vibrating with stored energy like a bow.

From Supertraining, a fundamental text on strength: 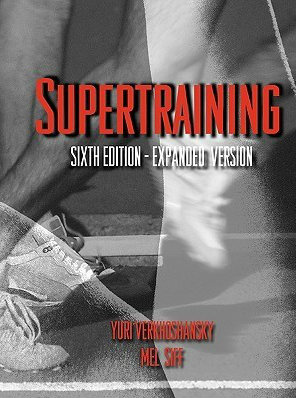 The position of the head has a powerful effect on overall posture…  As it is well known, in gymnastics a dropping of the head forward initiates the forward somersault, just as the backward throwing of the head initiates the back flip in gymnastics and diving…  It is vital to use a definitive extension of the neck to facilitate powerful contraction of the postural muscles of the trunk during all lifting movements from the ground.  This facilitating action of the head should not be done so as to cause a pronounced hollowing of the back…[but] in such a way as to maintain as closely as possible the neutral spinal disposition, with its three natural curvatures…  Correct positioning of the head will ensure that the back assumes the posture where trunk stabilization is shared between the erector muscles and the spinal ligaments…  Action of the eyes is closely related to the action of the head, so it is essential to facilitate correct…posture by using the eyes to guide the head into the position which is most appropriate for each stage of the given movement.  Generally, the neutral spine position is maintained most easily if the eyes are looking almost directly ahead and fixed on a distant object.

We accept the above as the SFG standard. 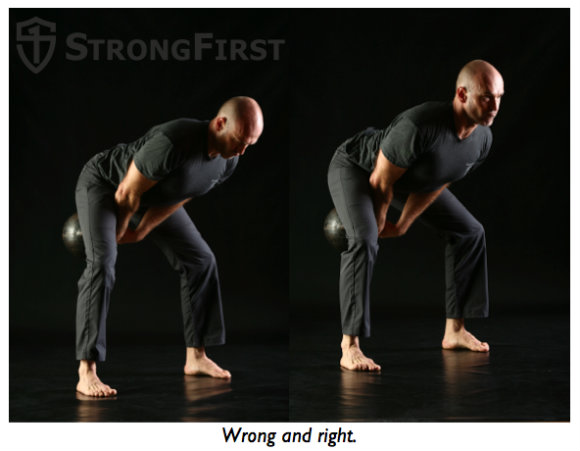 The only person I have ever seen manage a perfect hard style swing, powerful and graceful, while keeping his neck close to neutral is Master SFG Brett Jones. He adds some nuances to the standard recommendation and offers an option for some:

If you are getting yanked into extension during the eccentric catch of the kettlebell, then it is a bad thing. If the arms are connected to the body and you choose to hold the extension, it can be a very good thing. When I try to keep my eyes on the wall in front of me I feel like I am jerked into a bit of cervical extension and it doesn’t feel good. For me it is much better having a focal point closer to me (four to six feet in front of me).

Brett adds that he does have a slight cervical extension, even though he is looking at the floor four to six feet in front of him. He observes that most people who think they are neutral are actually in flexion. 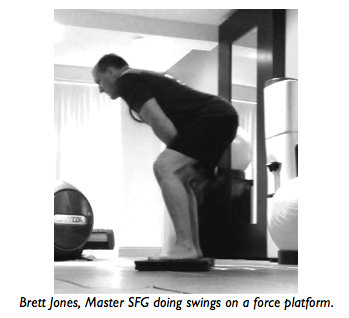 The Master SFG also warns against hyperextension. It is easy to get into if you are doing your swings almost stiff-legged. If your knees are almost straight on the bottom of the swing, your torso is bound to be almost parallel to the ground. That means looking straight ahead will automatically hyperextend your neck. Remember that the hard style swing is related to a jump and as such demands some knee flexion — not to the point of squatting, but enough to activate the glutes.

Heads up and power to your swings, ladies and gentlemen!

Pavel Tsatsouline is the Chairman of StrongFirst, Inc.

26 thoughts on “Heads Up! The Neck Position in Kettlebell Swings and Snatches”