Many years ago when I was a competitive powerlifter and a Westside Barbell student, I hurt my back in training. Pretty badly too. I was in preparation for Masters Nationals and I still wanted to compete (this was before I learned not to be greedy. I was tough but greedy for my strength).

I trained for powerlifting meets using the high-volume approach that Westside Barbell utilized. I was at a complete loss as to what to do as there was no way possible to do even moderate workloads the way my back was behaving.

My genius wife, the queen of “uncommon sense” asked me the most relevant question: “Can’t you just do enough not to hurt yourself? ” I had never even thought about that, but it made perfect sense. Just do enough work to maintain the strength I had already built in the years before but not enough to further tweak my back and get through the competition.

I needed a new approach. A minimal approach to the lifts. In the squat, it turned out I could only tolerate about 6-8 total lifts per workout, including warm-ups, which in my old training was virtually nothing. In the bench press, I could lift a bit more. I had to figure out how to make 6-8 total reps in the squat equate to enough work to get me to a 540lb squat at 181lbs as my goal was an ADFPA (American Drug-Free Powerlifting Association) 1500 Elite total at 44 years old. 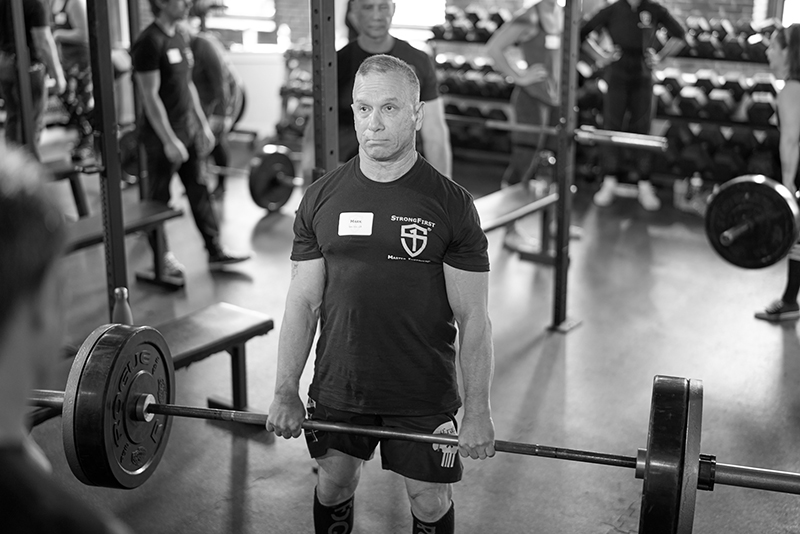 Breaking Down the Lift into Components

I decided to look at each part of the lift as a separate repetition in itself. Master Instructor and StrongFirst CEO Fabio Zonin calls the setup of each lift the first rep which was exactly the approach I took.

For the squat getting under the bar was a rep. Unracking the bar was another rep. Each step of the walkout was a rep. The descent was a rep. The ascent as well as the walk back into the rack. I approached each little aspect of every single rep as it’s own world; an entity onto itself. This gave me much to think about and every little detail of tightness and breath controlled mattered. It had to. So every single repetition had at least 6 separate components to it. This not only made me stronger from totally controlling every small aspect but lead to a greater focus and concentration on any potential power leaks in my approach.

It worked even better than I imagined. Every single rep had to be perfect. When I thought about what I was attempting to do at the contest the only thing that mattered was one rep for my total. Not how many I could do for five or three or two. Or how many sets I could tolerate in the workout. Just one solid rep in the meet to help me to my Elite total. That’s what the contest was about.

Personally, even though I have competed many times throughout the years I enjoy the training process much more than competing. I tend to get lost in “winning the workout” rather than what the workout will produce at the contest. I didn’t have that luxury this time. My back would not allow it.

But if I could manage 8 quality repetitions in each workout that would give me up to 64 separate elements to maintain and or build my strength leading up to the comp. In a way that’s serious volume right there.

It’s easy to forget about these small components but they are the small links in the chain. The stronger they are the stronger you are. My entire mindset was changed and everything was focused on that competition single I was shooting for.

At the meet, I did not achieve my Elite total, I missed it by 15 pounds. I made some strategic errors that required me to repeat my second attempt squat and deadlift. The most important thing was accomplished, I didn’t hurt myself more and I learned some very important lessons about training.

These training lessons carry over to every training practice regardless of the tool (barbell, kettlebell, or bodyweight). The StrongFirst mantra of “an inch wide and a mile deep” particularly applies here. There is always much more going on than meets the eye. Especially when the training loads or intensities are high.

The first rep is the setup and the lift is not over to the bar or bell is safely on the ground. The mental strength I gained by so much intense focus was a bonus gift too. I have never looked at any lift again in the same way, even after I was healed and able to train hard again. The practice we speak of so much is as much about the mental as the physical. The two are one. They cannot be separated.

In the end, it’s about your body bending to your will, being under your conscious control. That takes diligent practice but also very specific practice. Know every part of the lift you are doing so you can work towards perfecting it and blending it into a seamless display of strength and power.