Training for the general sake of getting stronger is great. But having a specific goal within a realistic timeframe helps inform your training choices to work smarter, not harder. And smarter often means less. Here is how one strong woman got stronger with smart accessory lifts.

Idle hands are the devil’s workshop—this describes me to a T. After having trained for the Spring 2018 Tactical Strength Challenge and completing my StrongFirst Bodyweight Certification that same April, I found myself aimless and idle. I wanted a challenge that would allow me to maintain my deadlift, but also grant me the freedom to continue dialing in and improving my snatch. After considerable thought, I decided to up my Iron Maiden game. Having completed the challenge with a 24kg kettlebell in October 2016, I wanted to test myself against a 28kg bell.

The Iron Maiden Challenge consists of performing three lifts to strict technical standards: a one-arm military press, a tactical pull-up, and a pistol squat—all using a 24kg kettlebell. Men use a 48kg kettlebell for their Beast Tamer Challenge.

In May 2018, I assessed my baseline for the three movements. I could press the 24kg twice on my left and three times on my right, pistol with 16kg for 3 reps per side, and do 3 strict pull-ups with the 24kg. I set my date for September 18th (my birthday) and worked my numbers backward. Having been successful with my original Iron Maiden training, I used that plan as a basis for my new one. This time, I increased my focus on lowered volume, precise movements, and more direct carryover accessory work.

For the press, I programmed an effectively simple single-bell complex: one clean, three front squats, and a rack carry for time with a kettlebell one size bigger than for my heavy press. These addressed any anti-rotational issues while in various rack positions, and built time under tension with a heavier bell.

For the pistol squat, I practiced higher rep, lower weight, close-stance squats with the kettlebell in a goblet hold, and L-seated leg raises. Both of these are great for strengthening the main movers and stabilizers needed to maintain control at the bottom of your pistol.

And for the pull-up, I trained multi-angled flexed arm hangs (FAH) with a bell one or two sizes heavier than my current pull-up bell, active negatives with my 1RM bell, and tons of elbow and thoracic spine mobility drills. The FAH and active negatives addressed my pull-up weak areas and sticking points, while the elbow and t-spine drills kept my elbows, shoulders, and wrists happy. I like my elbows. I’d like to keep them.

And to improve all three, I relied on the get-up. I varied the load, the execution, and the overall volume according to how I felt that day, and the next day’s training schedule.

Planning and Doing the Work

We preach (and hopefully practice) continuity in our training. I wrote two separate programs with that exact concept in mind. A nine-week undulating, percentage-based program, and a six-week controlled volume, maintenance program. They can be repeated indefinitely, and mixed-and-matched if you so choose. For the press, I added an extra day of 2,3,5 ladders with a 20kg for 20 minutes, once a week. I did this to establish volume with a manageable load with the discretion to increase rest as needed. I tracked the rounds and the rest periods for each session, with the goal being to improve weekly, but again, adding rest when and where I needed.

The intent of the program’s first nine weeks was to increase the number of reps per set gradually while decreasing the number of sets and duration of rest needed to recover. I split it into two, four-week blocks with a de-load week on the fifth week.

After completing the first four-week block of the series, I retested the three lifts. I could comfortably press the 24kg for five reps per side (the left was a bit sticky), pistol the 24kg for 2 left/3 right, and do one strict pull-up with the 28kg.

After the de-load week, I adjusted the weights for the second four weeks but tried to be a bit conservative, as I can be impatient and love instant gratification (Another great reason for me to have a structured program with a very clear and concise goal). Below is an example of weeks 6 and 7: 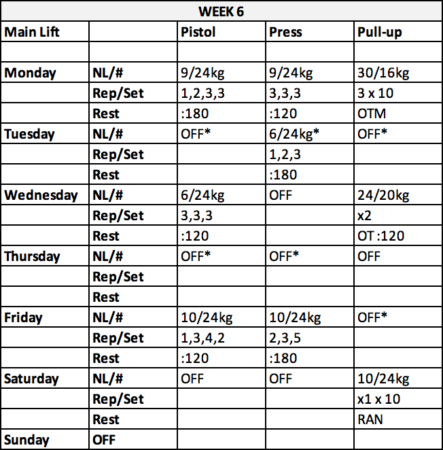 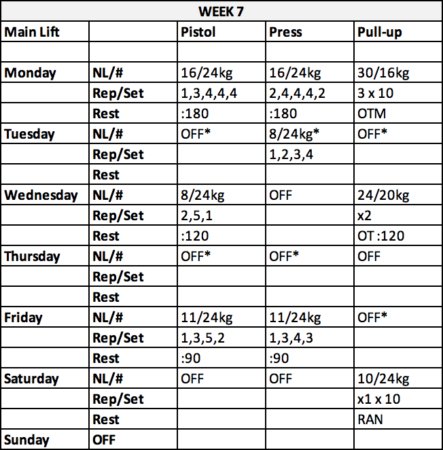 On July 14th, I finished the second half of the nine-week series. I rested for a few days and retested the pistol and the pull-up. To my surprise, I did singles with the 32kg (right leg only pistol). I chose not to retest my press and continued to focus on clean, “fast” presses that hit standard every rep.

At this point, and for the following 6 weeks, I switched over to my maintenance program, except for the press. The concept was to slowly reintroduce movements I had restricted or removed from my training to better focus on the goal at hand. However, I continued to build my press strength and confidence.

Then, on August 4th, having just wrapped up an easy training session at home, I walked by the 28kg. I stopped, cleaned it with my right arm, and pressed it. (Completely different story on my left…) I was ecstatic—but being the constant pessimist, I thought it was a fluke. So, I waited 5 minutes, re-cleaned it on my right, and pressed it again. Slower than the first, but not too bad!

I achieved my goal in 12 weeks—6 weeks ahead of schedule. While I continued the maintenance program for its entirety, I had a little freedom in my training to reintroduce movements and skills at my body’s discretion. And on my 39th birthday, I completed all three lifts with a 28kg bell, in under 2 minutes. Had I taken a bit more time between lifts, I would have focused on a longer pause in the dead hang prior to my pull-up. Note taken.

Make the Goal the Goal

I have to believe this was not because of a superior, new and improved, reinvention of the wheel—but rather, creating a realistic program, with an obtainable goal, within a manageable time frame, while being diligent and patient in my practice (I am an impatient person, so this was a true test of willpower). I call it my “KISS Rule.” Keep It Smart and Simple. 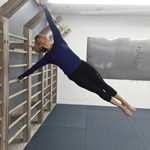 Owner and Founder of Forge Fitness in Bozeman, MT

With a background in track and powerlifting, both as a competitor and coach, kettlebells did not present themselves as beneficial tools for my practice. Until I experienced them. After one session, I could feel every weak link I possessed in my body, completely exposed. My mind began linking the movements to mechanics I was already teaching and executing. Less than a year later, in 2013, I earned my StrongFirst Level 1 certification. I have never looked back. Since then, I have continued learning and expanding within the StrongFirst system. Kettlebells have become the backbone of every training program that’s designed through Forge Fitness. Post physical therapy students, student athletes, powerlifters, long distance runners, baby boomers, and especially my 50 and over crowd. Kettlebells and StrongFirst have granted me the opportunity to expand my teachings beyond anything I have ever experienced. I couldn’t be more grateful.