Adapting to load is what makes us stronger. But because training loads can be manipulated in so many ways—intensity, magnitude, repetition, duration, frequency, direction, speed, acceleration, exercise, equipment, sequence, rest, etc.—some people get paralyzed by the seemingly overwhelming options; frozen by the insecurity of making a wrong choice. Too many do nothing. Others bounce around, always looking for the next best thing. Neither approach is productive, but there is an elegant and deceptively simple solution. Find what works…and do it. Consistently. For the long game. That’s how we honor the continuity of the training process.

Back when I went through my first StrongFirst Certification in 2014, I learned three principles that form the foundation for our training. They were Continuity of the Training Process, Wave the Load, and Specialized Variety. (It has evolved a bit since then—recertify to get your new manual—but the context remains unchanged for the most part.) And while I intuitively understood wave the load and specialized variety, I couldn’t quite grasp the deeper meaning of continuity. But five years later, I appreciate the reason it gets mentioned first, having recognized in my own training practice that it has made the biggest impact.

In regards to my strength training and fitness, two people have shaped me into who I am today. The first person is our Chairman and Founder, Pavel Tsatsouline. The second person is Dan John. When I first picked up a copy of their Easy Strength book, several years before my SFG, I instantly fell in love with its simple and sustainable approach to building lasting strength: persistent practice. Though I don’t really remember reading the specific word “continuity,” the message was clear and compelling, and it would become one of my important life lessons, even though it would take me another year or so to actually begin executing.

When Fate Calls: The SFG

Fast forward to the fall of 2014 and the second ever SFG kettlebell instructor certification in the Republic of Korea. I knew I wanted to become certified, but I couldn’t commit. I decided to wait another year. Then Woochae Yoon, Senior Instructor, approached me to be the event’s translator. While he couldn’t offer me a salary—he did give me a new Beast (48kg kettlebell) as a thank you—he promised an invaluable learning opportunity that I could not refuse. But then I realized: fate was testing me—either I show up here, now, and all-in, or live to regret it forever. I did not see myself passing the 5-minute snatch test but still, I signed up as a candidate a few days before the event. I was going to learn from the best.

How did it go? Well, despite failing the snatch and strength tests (back then men had to do five reps of pull-ups or chin-ups) and the increased mental and physical challenges from playing both interpreter and student roles, it was one of the best weekends of my life. And one of the hardest. Imagine practicing drills to the exacting standards then immediately shifting into translator mode for Master Instructor Jon Engum and others while everyone else rested. I barely squeaked by the technique tests. And honestly, I don’t remember much of the graduation practice workout. Hey, don’t get me wrong, I still loved and embraced the “suck”—maybe it’s the former Marine in me.

Thankfully, having passed my technique tests, I was granted a ninety-day window to submit videos for my snatch and strength tests. But I initially had no idea how to get myself ready for the next ninety days. That’s when I reflected on the SFG programming lecture. Master Instructor Jon Engum stressed having faith in what you have learned and to continuously practice. So I picked up my SFG manual, my notes from Easy Strength and another Dan John book, Intervention, and came up with a plan. When it comes to continuity, Pavel and Dan stress practicing the fundamental movements (push/pull/hinge/squat/loaded carries) every day. So that’s what I did.

I trained this program every day (excluding Sundays) for the next three months. I waved the overall load and volume depending on how I felt that day and continued to pound it out. Around week ten, I felt really strong and decided to test the simple standards from Kettlebell Simple & Sinister. I was shocked by finishing within the allotted time and with relative ease. That’s when it sunk in: continuously improving my program’s fundamentals had gotten me this far and would get me my SFG certification.

So, on day 85, I chose to test myself. On video of course (and just in case). I finished the snatch test with almost ten seconds to spare and grinded out five pull-ups. I’m a certified SFG! Trusting and continuing the process worked!

After a month, reality set in…since you don’t go to school for just a weekend and never come back. You keep on coming back over and over. That meant that I would either need to go on and become an SFG II or recert somehow within the next two years. Back then, my bodyweight required a Beast press for my SFG II half-bodyweight strength test (I’ve since dropped a few pounds and now only need to press the 44kg), which seemed like a totally impossible task. And the 5-minute snatch test…it gave me the shivers just thinking about doing it again. Honestly, if someone had said to me “Joey, the press and snatch test will be the least of your worries in the next 3-4 years,” I would have asked if they’d been hit on the head.

Continuity for a Long Game

Since I knew that maintaining my SFG instructor credentials was important and pursuing SFG II was in my future, I decided to have faith in the exact program that got me my certification. This became the bread and butter of my training. Over time, I added Original Strength Resets, and gradually increased the load (today I goblet squat/getup/press with the 36-44kg for my warm-up) and volume over time. I would do other pressing or barbell programs after the “warm-up,” but this 30-40 minute “warm-up” itself would be a solid session. It’s this simple plan, practiced almost daily, that has made me much stronger over the last four years.

But what about going really hard? Personally, I have no issues with doing a very intense program from time to time to address a particular lift or issue. However, it can only be sustained for so long; always pressing the pedal to the metal is a recipe for getting hurt—the opposite of a sustainable strength practice. But doing the above “warm-up program” on a nearly daily basis will get you stronger over time in a much safe and more sustainable fashion. Just feel free to go up a size when you feel that the current bell you are using feels too easy. As for barbell training, I just picked two lifts to cycle (bench press and deadlift or military press and back squat) with the Power to the People program 2-3 times a week. I also highly recommend the Daily Dose Deadlift program 3-4 times a week for the deadlift if you consider yourself an intermediate deadlifter.

Yes, I have done other relatively intense programs, from my Soju and Tuba or the Fighter Pullup Program, to lifting with Plan StrongTM and practicing Strong EnduranceTM protocols. But continuing to “warm-up” with the fundamental movements is what really set a solid foundation for my success with the higher intensity programs. And on days I didn’t feel like lifting, this “warm-up” would always be a solid session.

The Proof is in the Results

And what happened in the five years that followed my SFG I? I recertified my SFG I a total of four times, my SFG II and SFL twice. Yes, the imaginary person I accused of being hit on the head was actually right! The last time I recertified was on February 21st, 2019, through the new unified recertification (recertifying all designations at one event). That day I pressed the 44kg without even hissing, broke the 4-minute barrier on the snatch test, and pulled a double bodyweight deadlift off the floor very explosively without even grinding. Progress indeed!

How was this possible? I continued the training process. Day in, day out, on an average of four times a week consistently for nearly five years. And the day I went through the unified recertification, the true context of the Continuity of the Training Process finally clicked. Oh, and just for the record, I pressed the Beast three times on each side, pulled 2.3 times my bodyweight on the deadlift, and benched 265 pounds (25 pounds more than SFL test weight) with ease very recently.

So in a Nutshell, What is Continuity?

To my brothers and sisters in strength as well as those who have yet to officially join our community, I hope this article on Continuity helps to add more context to the first ethos of our Code, “I am a Student of Strength.” Trust in what you have learned, continue to practice it on a regular basis, and good things will happen eventually. I would like to take this opportunity to give a shout out to StrongFirst Certified Senior Instructor Woochae Yoon for finally giving me a cause to show up, and to my mentors, Master Instructor Jon Engum and Senior Instructor Dr. Mark Cheng, for their guidance. 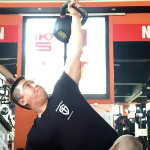 When Joey is not busy providing translation and interpretation support for his commanding general in support of the Republic of Korea-United States Alliance, he devotes his time and passion as a student and teacher of strength in accordance with the StrongFirst principles. A former American football athlete in college and Republic of Korea Marine, Joey has been the strength coach for numerous football programs in Korea. Joey was the strength and conditioning coach for Chungang University in 2008, semi-pro football team Seoul Vikings from 2009-2011, the Korean National Team in 2013, and the University of Seoul from 2014-2015.

Nowadays, Joey likes to spend his time conducting strength training clinics for football teams in Korea, while traveling the world to learn more as a student of strength and provide translation and interpretation support to StrongFirst certifications in Korea. Any soldier or English speaker living in Korea is encouraged to seek out Joey for strength training. Personal training for soldiers of the Warrior Division are always free of charge during PT and lunch hours. Joey can be reached at readysethut@gmail.com.