Training for a world record requires grit. Many may approach the challenge preparation by continually pushing for more “burn.” But there is another effective, sustainable, and arguably superior way. Training to avoid (or at least delay) the unfavourable internal conditions that lead to failure or reduced performance. And it doesn’t just work to break records.

In April 2017 I had a crazy idea. I was going to attempt to beat the Guinness World Record for ‘Heaviest Weight Lifted by Kettlebell Swing in One Hour’ by a woman.

I was organising a charity event to raise money for the MS Society, as my dad suffers severely from the illness, and thought a world record attempt would help with fundraising. After all, “strength has a greater purpose.”

The rules specified by Guinness were simple: only two-arm swings were acceptable, with hips and knees fully extended at lockout and arms at least parallel to the floor. On the downswing, the kettlebell “must go beyond the participant’s knees when they reach the squat position.” Clearly, their rules are different than at StrongFirst, but our standard-meeting swing would meet their requirements. The current female record stood at 20,816kg.

Since I used swings in many of my training sessions, I considered myself to be well-conditioned. While I knew it would be challenging, I felt confident that I could beat the current record. My belief was quickly tested when I began training.

My attempt would take place in July 2017; I had three months and many decisions to make. I decided to use the same size bell for the duration of the attempt. Swinging a 32kg bell was normal for me, but I figured my grip would fatigue after multiple sets. Instead, I opted for 24kg as this was my ‘comfortable’ bell.

I would aim for 1,000 hardstyle swings in the hour (24,000kg in total). I knew this would be a challenge but seemed achievable with consistent training. Swinging 20 reps each minute on the minute (EMOTM) for 50 of the minutes would get me 1,000 swings. Nearer the time I would decide how I was going to use the remaining 10 minutes’ rest.

I started by testing where I was at: I managed 15 swings with 24kg on the minute for 25 minutes (375 swings; 9,000kg). It was tough—much harder than I thought it would be, especially on my grip. By the end, I struggled to hold on to the kettlebell. It suddenly became apparent just how much practice I would have to do and how smartly I would need to train.

To succeed, I needed to focus on improving three areas: my endurance, my power, and my grip. After my baseline session, I also realised how much of a mental challenge this was going to be. So I decided to keep training simple and focussed on the goal.

Plan and Perform: Endurance and Power

I programmed three sessions per week, focussing on either endurance or power using Strong Endurance™ anti-glycolytic principles: “to train to avoid (or at least delay) the unfavourable internal conditions that lead to failure or reduced performance.”

The key point when following this type of training is it shouldn’t be strenuous. While that might sound counterintuitive, it is common throughout Russian programs (that have produced countless champions). Each rep should be a repeat of the first strong, powerful rep. If you are training and start to lose power or form, lose the ability to breathe normally and recover in rest periods, or start to feel “the burn,” you must stop. This is not negotiable.

Those signs indicate you are building up metabolic waste faster than you can deal with it. Anti-glycolytic principles suggest avoiding this as much as possible in order to target the oxidative system, which has far greater endurance than our short-term energy sources. My goal was to spend as much of the record attempt avoiding energy debt, so my power output didn’t drop.

I based my higher volume endurance sessions around using a lighter bell, either 18kg or 20kg, aiming for 15–20 reps EMOTM, starting with 25 minutes.

I also included some one-arm swings as part of my endurance training. Although I couldn’t use them during my record attempt, I knew they would strengthen my grip. I had originally included farmer’s walks in the program but soon found the one-arm swings were actually more useful.

To get the training adaptation I needed, I was sure to follow Strong Endurance™ principles during both endurance and power sessions. If I couldn’t perform reps following those guidelines, I stopped.

By June, training had gone well: my baseline endurance improved and I started to use the 24kg for my endurance sessions. My fitness felt good and I wasn’t losing power despite the weight increase. However, I quickly became aware that I wasn’t going to be able to do 20 swings on the minute for a prolonged period with the 24kg. My grip still wasn’t strong enough to hold the kettlebell for that many reps over a longer period of time and I was beginning to struggle after around 20 minutes. My forearms began to burn—a big no-no.

So I went back to the drawing board to test different rep ranges. 10 swings every 30 seconds worked best. This way I was still hitting 20 reps per minute, but the 15 seconds or so between sets was allowing my grip to recover. Mid-June, I performed 700 swings (16,800kg) in 35 minutes fairly easily following this structure.

My final training session before the record attempt lasted 50 minutes. I wanted to replicate the time I’d be swinging for but with reduced rep volume. I did a very easy 15 swings EMOTM using the 24kg bell and without ripping my hands (something I’d been very careful to avoid throughout training).

One big thing to take from this is: if you believe you can, then you can. In the times I felt like giving up, what kept me going most was the knowledge that I was able to even attempt something like this when many other people—like my dad—would give anything just to be able to walk. I was lucky enough to have a strong, healthy body. I was going to use it.

I was extremely nervous, but as we had already raised over £4,000 (approximately US$5,000) for the MS Society, I was determined to beat the record. I felt physically and mentally prepared and, in my mind, there was no way I was going to fail.

The first 45 minutes weren’t so bad and everything was going to plan. Then, with 15 minutes to go, my right hand tore badly—I still have the scar. That didn’t stop me and I kept going to the end. I now know the true definition of blood, sweat, and tears.

There was nothing complicated about my program and I’m not special. The keys to my success were intelligent and sustainable programming, hard work, consistency, and the determination that comes from knowing “strength has a greater purpose.” 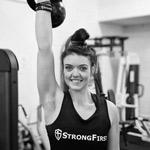 Megan has trained with kettlebells for over six years and attended her first SFG in 2016. Since then, she has assisted at kettlebell certifications and courses and earned her SFL. She has continued to develop her coaching knowledge by attending StrongFirst's Strong Endurance, Plan Strong, Second Wind, and StrongFirst Resilient.

She is a personal trainer based in Hebden Bridge, United Kingdom, and uses StrongFirst principles in her own training and with everyone she teaches. She works with a vast range of people of all ages and abilities for improving general strength and also specialises in strength rehabilitation through better movement.

She coaches on a 1-2-1 basis and also runs small group kettlebell classes where the focus is always on good movement as a solid base to build strength.

19 thoughts on “How I Became a World Record Holder”