It’s well known that the swing is the center of the kettlebell universe. All the basic ballistic kettlebell movements depend on a strong and powerful hip drive to swing the bell into a snatch, clean, or a heavy swing itself.

At the center of the swing is the hip hinge. A fundamental movement pattern, the hinge provides the most efficient way to pick things up or to jump. The key component is the hip moving to the rear while the lower back stays in neutral as the hip flexes.

The hip hinge is sometimes also called a pulling pattern or a bending pattern. Not only is it the safest way to bend, but also the strongest movement we can make. More weight can be lifted this way than in any other lift. 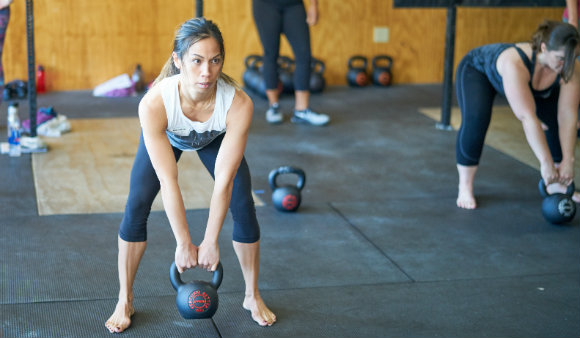 And, as basic as this movement is to our strength and health, it is still easy to mess up. Being able to keep the lower back in neutral while the hips do the moving is key to both the hinge and our back health.

The old adage told us to lift with our legs, not our back—but that’s not exactly right.

We should lift with our hips, not our back.

What’s Holding Back Your Hinge?

The hinge is not a squat. In a squat, the knees move forward as the hips move down. In the hinge, the hips move to the rear, not down. The knees bend, but minimally.

But if we are tight and restricted because of sitting too much, perhaps the hips don’t move well. Perhaps when we reach down to pick up something that’s fallen, we bend and round our spine instead of shifting our hips and hinging with a flat lower back.

Long periods of sitting tighten almost everything necessary to a good hip hinge:

Anyone who’s had any level of back injury (statistically, that’s almost 90% of us at one time or another) will tell you how many times a day life requires us to bend and lift things off the floor—and how painful that can be, regardless of load. 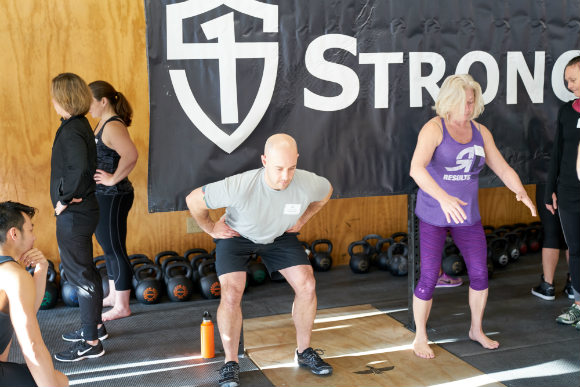 So, we all need to be able to perform and be skilled at performing the basic hinging pattern such that it’s on autopilot. Strengthening the hinge pattern with swings and deadlifts (of all varieties) ensures that the movement is strong and enduring, as well.

Gray Cook illustrates how interconnected all the joints and muscles of the body are with this visual:

Lock up one of the joints and havoc can be had both upstream and downstream—or both.

Making sure the hips are mobile, strong and conditioned is vital for our health and strength. And longevity.

We all sit too much as a culture. And, as Kelly Starrett of mobilityWOD says, “Your butt is not a weight-bearing surface.” Some basic stretches, self-myofascial release, and mobilization to open up the ankles, hamstrings, and glutes will go a long way, as well. And breaking up your sitting time with walks, deep squats, or other basic patterns help keep “sitting rigor mortis” from settling in.

Dialing in your hinge is one of the best ways to ensure the center of your body is strong and stable. The single-leg deadlift, done with little to no weight, can dial in the hinge and solidify the balance on the whole foot that’s needed for an athletic hip hinge.

A simple corrective such as the bird dog exercise can create spinal stability and endurance in the deep spinal stabilizers and goes a long way if regularly practiced even for just a few minutes at a time. 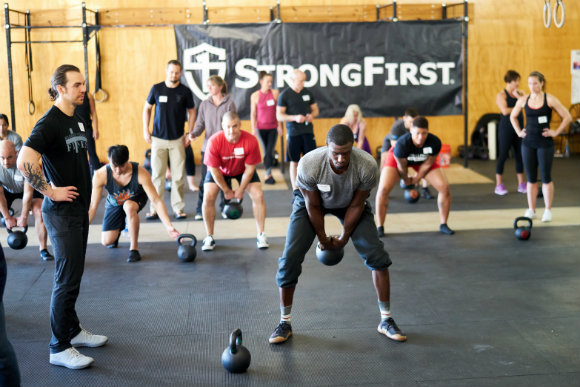 How to Build Your Hip Hinge

The hinge is a skill, and skills must be practiced and honed to shine.

Finding the optimal hinge pattern for the swing and deadlift, as well as the side hinges we use in the get-up and the windmill, requires skill, patience, and a solid understanding of what we are trying to achieve.

For the swing and the deadlift hinge, it’s about the “jump” position. Although the knees do not translate forward in the swing, this does not mean they do not bend nor that there is no downward force on the ascent. In fact, it is vital for maximal power production. Think vertical jump.

The swing is the forward projection of force, and the hips are driving forward during extension, but you must have enough knee bend and the weight distributed across the “tripod” of the foot in the bottom of the hinge to be able to jump out of the bottom.

The swing is a jump that doesn’t leave the ground. Once I could feel this, it made my swing much more powerful and enduring. Instead of pushing my hips back and coming up when it seemed time to, I now had a “bottom” to push off of. This made a major difference in power and consistency.

If we get too bent over, too stiff legged, it’s easy for the hinge to turn into what we call a “drinky bird” swing, with minimal knee flexion and more forward lean than sit back. The knees must bend at least fifteen degrees for the glutes to be engaged, and strong glutes are key to a solid hinge, swing, deadlift, and, of course, a jump.

This jump position also provides a shock absorption effect and brings not just the hips but the upper legs into play. Like a skier negotiating moguls. Without this ability to launch out of the bottom of the hinge we lose power as the weights get heavier and/or fatigue sets in.

My Application of the Athletic Hip Hinge

I found this out the hard way while training up to the Sinister five-minute swing test this year. While I had been swinging kettlebells for almost sixteen years, I’d never felt my groove was ideal. I did not have a drinky bird, but my classic technique relied too much on the stretch of the glutes and hamstrings to initiate ascent. I had nothing to push off.

For this brutal test I needed more.

My regular Saturday training had me doing 10 sets of 10/10 in the one-arm swing with the 48kg. Rest periods were dictated by the number of training partners that showed up (max was three others) and/or the “talk test.”

Sets one through seven were usually fine. But the last three sets and the last five reps of the second arm turned out to be very trying. I would run out of strength and endurance, and my pure hinge technique wasn’t allowing me enough “jump” out of the bottom. A lot of the last sets and reps got pretty ugly. But more importantly, they had far less power.

I knew I had to change something if I was to survive the test. I needed a place in the bottom position (powerlifters call this the “hole”) to launch out of.

Enter the “Ba Boom.” For some reason, it occurred to me that after pushing the hips to the rear, I should then let the hips drop a bit before ascending. It worked. I now had a position I could jump out of, like the bounce off a diving board. With just a bit of “shock absorption,” the entire strength curve changed. After that, every time I hit the apex of the back swing, I thought, “Ba boom,” and tried to jump out of the hole.

It worked like a charm. When I hit those last sets and reps, my mechanics were working for me instead of against me. I could jump. The bell was no longer swinging me. I was swinging it, even as I ran out of energy.

Watch videos of any kettlebell athlete swinging very heavy bells in any fashion and you will notice they all have more knee bend than you expect. None are drinky birding the movement. This is for the reasons I mention above. You have to be in the jump position to be able to oppose heavy bells or the fatigue produced by lighter bells and high repetitions. 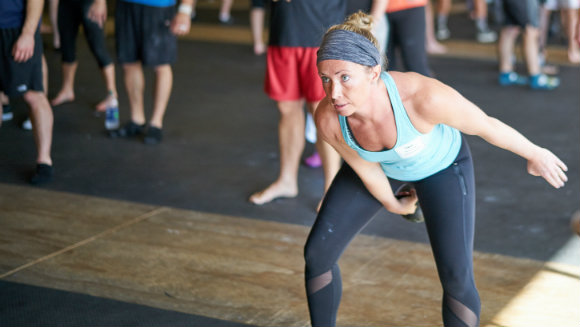 The True Test of the Athletic Hip Hinge

The true test of any technique, besides immediate performance, is whether it holds up over time. This technique has. I passed the five-minute 48kg test in March and have been using this technique twice weekly on both my volume swing day and my heavy day. Keeping my hinge groove solid and smooth has made all my other lifts go up, and my lower back has never felt more stable and resilient.

In my work as a personal trainer, I encounter numerous people who have had hip replacements and or are trying to stave off a replacement. In all cases, dialing in their hip hinge in all planes has made their rehab and prehab more effective. The same goes for those with lower back pain and injury. Often a weak and or ineffectual hip hinge was creating as much problem as it was thought to be solving.

It never fails to go back to the basics—to the drills learned in the SFG Level I Certification and the progressions that formed the foundation of the basic movements we now practice and fine tune.

Why the hinge? Because it is without a doubt the biggest bang for the buck you can get in the athletic world on every level: strength, power, resilience, health, corrective. And the more you make it your own and own it, the more you get back.

Now, go find your athletic hip hinge and jump into your swing!

22 thoughts on “An Explanation of the Athletic Hip Hinge”