Tammy Baskett is a 61-year-old dedicated student of strength and a massage therapy client of mine, but it hasn’t always been this way.

When Tammy was younger, she enjoyed a fairly active lifestyle outside of work. Her favorite pastime was dancing with her husband. But her profession as a dental hygienist was not active. Not only was it sedentary work, but she also leaned to one side and twisted for most of the day. Every day, without knowing it, she lost a little more mobility and became less body aware.

Her profession was cut short because of an accident that caused a serious concussion as well as neck and shoulder injuries. While rehabilitating, and being less active as a result of the injuries, Tammy started to gain weight. Her fear of injuring herself again was high, and she was no longer able to dance.

The Wave That Turned the Tide

Then, Tammy went on a Hawaiian cruise with her mother and daughter. They were on the last leg of the cruise, playing in the ocean, when a rogue wave dashed Tammy’s daughter straight into the side of her knee causing it to buckle. She made it home to Amarillo, and promptly went to see an orthopedic surgeon named Dr. Veazey.

Dr. Veazey did what he could to put everything back in working order, but the damage was extensive and the outlook for improvement was grim. Tammy had injured a major nerve and that caused her to have drop foot. Drop foot is caused by a weakness in the muscles that lift the front portion of the foot. In Tammy’s case, the drop foot was caused by nerve damage. This condition causes the foot to drag along the floor when walking.

After six months of physical therapy, Tammy had improved, but Dr. Veazey thought massage would hasten the healing process. Dr. Veazey often refers his after-surgery clients to me, knowing I have been a Licensed Massage Therapist for eighteen years. I have an ability to make even the most fear-filled person feel safe, and he knew Tammy would be well taken care of.

When Tammy came in for her first consultation she weighed about 250lbs and she wore a boot that had a mechanism to pop the foot back up when she walked. She was not moving well and had a fear of falling because she knew she would not be able to get back up. She also had a history of tripping and a high occurrence of accidents from lack of awareness.

Tammy came to me once a week for massage. I worked on loosening her muscles and waking up the nerves in her leg, foot, and toes. After about two months of massage, I felt we would have more improvement if we also started strengthening her body. She then started training with me twice a week, and continued getting massages once a week.

After a low FMS score, I knew we would need to start with body and spacial awareness. We started with learning a ten-minute mobility session. But it turned out that getting down on the floor to execute the mobility sequence was our first challenge. So, I taught Tammy how to use a sturdy chair to assist her getting down and up, so she could practice this along with the mobility sequence. All of this was in an effort to get her comfortable with the floor and teach her things she could practice on her own.

While Tammy was on the ground, she rolled, she got on all fours and rocked, and she relearned how to crawl. She learned the roll-to-press and the tall-sit portion of the get-up (unweighted). She learned how to use her breath in conjunction with her movement so she became more mindful of how her body moved as she worked on proper squat and hinge technique. She then started to learn and practice tension-building techniques like the hard style plank and bridge. I also used the TRX to teach the inverted row, deep squat with pry for assistance, and elevated mountain climbers to strengthen her upper body.

As she became more aware of her movement, I incorporated kettlebells into her training: farmers carries, rack hold marches, pick up and put down the kettlebell in different variations, floor pressing, overhead holds and presses, and all variations of halos. I started her on elevated deadlifts until she could do standing toe touch. When she finally achieved the toe touch, we took the kettlebell to the floor. For conditioning, I threw in hike-backs for low reps and low sets.

I should mention at this point that Tammy may never swing a kettlebell. The ballistic nature of the swing requires tremendous body awareness. If the student cannot touch his or her toes or has poor body awareness, then I will not have the student swing the kettlebell. This is wisdom I have learned from my StrongFirst mentors. Not everyone is meant to swing. Some people need the basics for a longer period of time, and I find that people actually like doing the “same but different” work because they know they will improve through the act of practice.

The Results of Tammy’s Training

About four months into our training, Tammy expressed interest in getting bariatric surgery. I encouraged her to find a weight-loss coach instead of taking steps back in her training due to the recovery from surgery. But at the same time, her interest in the surgery was an indicator to me that she was serious about taking action to improve her health and be serious in her training. Although we did have to scale back because of the calorie restrictions put in place by her weight-loss coach, she still worked hard. She was instructed to be mindful and aware of how she felt and we worked accordingly. Proper movement was our primary goal and that is what we consistently worked on.

Six months after her initial consultation with me, and one year after her knee surgery, Tammy had a checkup with Dr. Veazey, her orthopedic surgeon, and he was impressed with how much she had improved. She was cleared from having to wear the boot and her physical therapy sessions ended. From this point on, she would be able to train barefoot. She was both excited and anxious to live without the security of the boot.

Our next training phase for Tammy focused on getting her toes and ankles working with the rest of her body. This was the first time she could pull her toes in toward her shin during the crawling and rocking part of her warm-up. Using a lacrosse ball, she learned to loosen the arch of her foot as she worked her toes up and down. This was added to her every other-day-practice. With this progress, she was now ready for the get-down portion of the get-up, with assistance.

Tammy has now been with me for two years. She has lost 100 pounds and has become more aware of her movement. She is tripping less and having fewer accidents caused from not being aware of her surroundings. Most importantly, she can get up and down from the floor with ease. She is living daily without pain and she is dancing again!

If I had not learned the StrongFirst principles, along with the opportunities that come with the StrongFirst community, like Functional Movement Systems, I would have thought all I could do with her would be to use the weight machines to keep her safe. Instead, Tammy and I both have gone on a journey of discovery, growth, and strength that continues to this day. 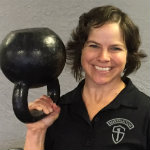 Roxanne became a Licensed Massage Therapist in 1999. Most of the students she coaches are also massage clients. She feels this gives her a deeper body knowledge of her students. Her primary goal in both modalities is to get her students more body aware they can slowly progress with minimal pain and no injuries.

15 thoughts on “Tammy’s Story: A Journey of Discovery, Growth, and Strength”