I believe strength is the most valuable quality to develop in fitness. That said, my recreational pursuits often involve the need for endurance, as well. I’ve taken on endurance pursuits ranging from wilderness backpacking to touring the American West on a bicycle. I must admit I have an interest in the “long haul.” For me, it’s a deeply satisfying experience to live out of a bag and roll up miles in lonely places.

In the past, to make way for multiple training blocks of long slow distance (LSD) work, I reduced my strength training frequency, volume, and intensity. Training this way resulted in a slower, “softer” version of me. Not what I am looking for these days. I want to stay strong, and still build or maintain enough endurance to take a three-and-a-half day, forty-mile backpacking trip on a few weeks’ notice.

Is that too much to ask?

Oh, and I’m a dad and husband, work too much, and don’t have the time or ability to recover that I had in the past.

Sound familiar? If so, I’m here to tell you that you can develop respectable strength and outstanding endurance, too. Practicing fitness according to StrongFirst principles over the past five years has allowed me to be prepared for even more extreme conditions. To push the boundaries of my endurance and rise to a challenge from a few younger, super confident colleagues, I signed up to complete a GORUCK event. The GORUCK events are described as “a team event (to)… build each class into a team through collective conditions of mental and physical exhaustion.”

Since it was my younger colleagues heading up the operation, we naturally “agreed” on the 24+ hour version of the GORUCK events, referred to it as “GORUCK Heavy.” In this event, the participants can expect to cover over forty miles on foot with a minimum load of 35 pounds. Often, it involves carrying other “fun” objects like telephone poles, fallen limbs of enormous proportion, or other participants. There are also a sizable number of chances along the way to check out your squat, lunge, push-up, plank, and crawling and carrying skills.

The GORUCK Heavy starts with the US Army physical fitness test (APFT) following the check-in. The APFT consists of a two-minute maximal effort push-up and sit-up test followed by a two-mile run. We were tested on a max set of pull-ups, as well. Participants were then required to finish a ruck march of twelve miles in under 3.5 hours. It’s only after this testing that the event “begins.” Clearly, significant endurance and strength would both be needed to be successful.

When it came to training for the GORUCK, my previous strategy for endurance event prep wasn’t possible given the time and physical constraints of my life as an adult. Nor could I abide the loss of strength I’d previously experienced following endurance training plans. But how could I properly prepare for an endurance event of this proportion with less time, more stress, and continued strength training?

Fortunately for me, the StrongFirst community is full of strong people willing to share knowledge about this topic. By listening to the advice of those who’d gone before me, I opened myself to a paradigm shift.

At a Plan Strong course in Portland, Oregon, I met Al Ciampa, whose beliefs about training and physical preparation offered the wisdom I needed. Al’s approach, developed over time and with experience, was tempered in preparing soldiers for selection courses and deployments. As such, it gave me the confidence to trust a plan that uprooted my understanding of what it looked like to train for an endurance event.

Such was my introduction to one of the training tools of Strong Endurance: alactic aerobic (A+A) training. A+A training can be summed up as using repeated short but powerful sets to build aerobic conditioning without experiencing a decline of strength and power.

With Al’s guidance, I chose high-power one-hand swings for the A+A stimulus and I planned for a significant amount of overhead carries and some pressing. All swings were completed in sets of 10, followed by a period of recovery and then swings on the other hand. Rest periods were managed loosely on heart rate. In general, I tried to stick to the heart rate cap guidelines set out in the Maffetone method and achieve as many rounds of powerful swings as possible.

I began this training eleven weeks out from the GORUCK event, while finishing a six-week cycle of single kettlebell pressing ladders. I was pressing three times a week, waving the volume across the week, and using a combination of 1/2/3/4/5 ladders and 2/3/5/10 ladders.

Seven weeks out from the event, I finished the cycle of kettlebell presses and began training push-ups using a grease-the-groove strategy. Five or six days per week, I did sets of 10-12 SFB-style push-ups throughout the day. On average, I’d hit 60-90 reps per day. I did pull-ups three days per week loosely following the progression of the fighter pull-up program.

Here’s what things looked like on a weekly basis:

Progressing the Load on the A+A

For example, here are the outcomes from the first four weeks of my A+A swing training:

I began the training plan using a 28kg bell. The idea in A+A training with ballistics is not to intentionally push up the number of swings, but for it to happen naturally. This is accomplished by attempting as many swings as possible without feeling like it’s a “fight” to keep the swings sharp and explosive.

By the end of week four, my swings were getting too easy. I found it hard to put serious power behind the swing without turning it into an overspeed swing or a snatch. At that point, I made the move to 32kg. My number of reps dropped a bit at first, but was quickly recovered over the following weeks. I relied on the swings for my physiological conditioning and total-body strength training.

As for the rucking, I did what I could, when I could, by keeping my pack loaded and walking at lunch and taking an eight-minute walk to and from work. The only formal progression was my ruck on Sunday. I started with 30 pounds in my pack and worked up to 55 pounds over the eleven weeks. The duration progressed from one hour to three hours over the ten weeks leading up to a de-load week before the event. Often, I took twenty-minute walks with my family and threw my rucksack on. Occasionally, we went for a ruck in the woods. (This is called hiking and happens to be quite enjoyable.)

I cannot imagine training to complete the GORUCK without the rucking. It can probably be done, but I believe the orthopedic strain on the body that rucking creates demands specific preparation.

Because the GORUCK Heavy involves the APFT, and we would be strongly encouraged to “put out” during the test, I knew I would have to do some specific work to prepare myself for the max tests in the push-up, sit-up, and two-mile run. The key was to train for these without getting too sore or fatigued to stay on the A+A swings and rucking.

Three weeks out from the event, I turned up the heat and shifted my bodyweight training to include some glycolytic work. I accomplished this by keeping a similar daily volume of push-ups, but doing them in fewer sets. Typically, I did 20-30 reps per set and stopped a few reps short of slowing down.

I believe that training for a “glycolytic peak” was essential to my success in completing the event. I accomplished it by mixing 45 seconds of all-out, whole-body movements followed by 4-5 minutes of recovery and repeating for 5-6 rounds. The total time of these sessions was under 30 minutes and I did two or three of these sessions per week. In these “sprint” sessions, I worked very hard, but I did not chase exhaustion. I continued rucking and getting in at least one A+A swing session each week without much trouble.

My two favorite combinations for the glycolytic peaking sessions were heavy two-hand overspeed swings for sets of 10 reps followed by a “sprint” in the pool or 10 snatches paired with a 20-yard sprint pushing a sled.

Here were my testing outcomes at the actual event:

Reflections on My GORUCK Training and Preparedness

Let me set one thing straight: the GORUCK Heavy is a difficult event. It is not for the faint of heart. If you’re not prepared and not completely committed, don’t expect to finish. We covered over 40 miles on foot and did hundreds of squats and push-ups and heavy loaded carries.

But like many others in our community, I have found that training primarily for strength provides a larger return on investment than training primarily for endurance. From an endurance standpoint alone, I was happy with the results of my training. My most notable observation was that I got stronger over the duration of the event as compared to many of the participants.

Eighteen hours in, I could still take on loads beyond my ruck weight with little trouble. I noted this specifically at hour 23 while carrying two 40-pound packs and a 50-pound “team weight.” Yes, it was tough, but I could do it. I was also able to put out a respectable performance at the end of the event, which included a competition of sorts involving a large number of squats, pull-ups, and push-ups.

Reflecting on my preparation, the only thing I should have included more of were overhead carries and unilateral shoulder carries. These should be included as specific preparation for carrying logs with the team. A special note if you’re preparing for a GORUCK Tough (the twelve to thirteen hour version of good livin’): I do not believe that a specific glycolytic peaking cycle is necessary.

What I can say with confidence is that by following StrongFirst principles of training, I did not have to sacrifice my strength the way I had in the past to achieve a prominent level of endurance. I am happy to report that, with a slight shift in training, those of us looking for strength and endurance can indeed “have our cake and eat it, too.” 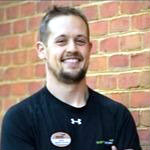 SFG I
Mark Reinke, SFG I, is the Director of Personal Training at ACAC Fitness and Wellness Center in Midlothian, Virginia. Mark began working in fitness and wellness in 2000 while still in college. He earned his bachelor’s degree in human physiology and a masters in teaching. In addition to his SFG Level I Certification, Mark holds certifications from the NSCA, ACE, Precision Nutrition, and others.

As a mentor to growing trainers, Mark seeks to help them carve out a living in the world of personal fitness. As a coach, he works with his students to incorporate strategies for realistic and manageable lifestyle changes that result in improved fitness and wellness to get the most out of life.

8 thoughts on “How to Use StrongFirst for Successful GORUCK Prep”