In 2003, I had the honor of having my book Athletic Body in Balance published by Human Kinetics, and for the first time people could read a perspective I’d been toying with since the early 1990s. Now, just past the ten-year anniversary of Athletic Body in Balance, I want to tell you what’s happened since, and what I would add or change if I were to rewrite the book today. 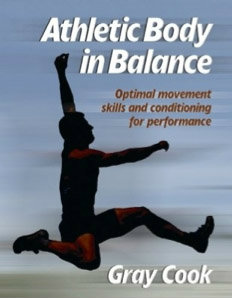 Seeking Balance on Every Level

Before we do that, let’s take a quick look at the original premise. Think of the title first—Athletic Body in Balance. Imbalances are an indicator of disharmony and every philosophy that stands the test of time preaches balance.

For me, the entire secret sauce in my career is that I haven’t been pulled back and forth in the hypothetical debate of “Is this better than this?” when considering a horrendous imbalance. Throughout my writing, beginning with Athletic Body in Balance, I nudge readers not to consider a parts approach to movement, but to instead consider a patterns approach. If we follow that logic, it would be more prudent to look at imbalances in patterns before we try to find imbalances in specific parts.

Let’s peel this onion for a second. If there are imbalances in a movement pattern, we break down that pattern. If there’s a problem with a specific part, we’ll find it. But if there’s no problem with a part, we work on the pattern as a whole. The parts just aren’t working well together. The whole should always be greater than the sum of the parts.

That’s what movement is.

The Benefits of Working on a Whole Movement Pattern

Nature shows us this every day. A baby learns to walk through reciprocal patterning and crawling. Those are still patterns—they’re whole patterns. They don’t do foot, ankle, and hip exercises to become walkers. They crawl, and then they struggle through the walking patterns. There are a lot of falls incurred while learning to walk.

Everything a baby does and everything nature provides us is self-limiting. This means our ability to pursue greater amounts of volume, intensity, and frequency are limited by technical ability, attention to detail, mobility, stability, sensory input, and interaction with the environment.

In Athletic Body in Balance, one of the things I wanted to do from the beginning was to create an appreciation for setting a baseline. A lot of people talk “test–retest,” but what they do more often is “trial–retrial.” They try something, do something, and try it again, but that’s not really test–retest. 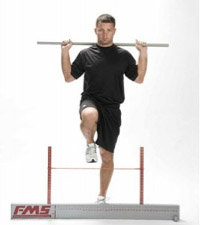 The 1st Thing I Would Add to Athletic Body in Balance

That’s a quick summary of what I hope is the timeless information in Athletic Body in Balance, but you may be interested to hear about some of the additions I would make now. The best way to discuss these is through the people who influenced me in recent years.

I’d like to start with Dr. Ed Thomas, who confirmed many of the suspicions I had about learning movement. Dr. Thomas is a walking encyclopedia of physical culture, physical education, and physical preparation history. He’s a Fulbright scholar, and he’s a PhD. He’s accomplished in yoga and martial arts, and he’s an expert on club swinging.

Throughout Athletic Body in Balance, I was passionate about keeping the reader in touch with the importance of jumping rope. Jumping rope is a remarkable self-limiting activity for lower body, core, alignment, interval training, springiness, and building a good power base. Had I known about Indian clubs at the time, I would have introduced club swinging as the upper-body counterpart to jumping rope for the lower body. I can’t say enough about how important it is to get a command of club swinging.

There’s a true movement difference in the upper and lower body. The upper body is mobility-driven, involving hand-and-eye coordination—in touch with circular patterns no matter what the sport or activity. The lower body is constantly in touch with the environment, often with a jarring impact. It’s transitional and most responsible for locomotion, whereas the upper body is mostly responsible for manipulation.

True alignment is something many of us aren’t aware of. We determine this when we try to learn something like the get-up, another activity that didn’t make it into Athletic Body in Balance because I didn’t know about it at the time.

The Get-up and the Deadlift

Kettlebells weren’t introduced in Athletic Body in Balance, and yet I’ve spent quite a bit of time studying kettlebells with Pavel Tsatsouline and Brett Jones. I came to know Pavel’s work when I watched a DVD of him talking about deadlifting and found myself in total agreement with everything he said. 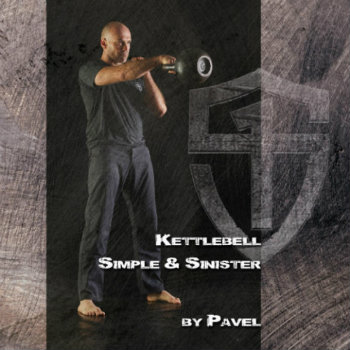 At that time, Athletic Body in Balance had already been published and it occurred to me that I had assumed everyone knew and used the deadlift. I’ve had a huge appreciation for the deadlift since my high school football days. I was wrong for assuming that because I appreciated the deadlift, my readers already did, too. I consider jumping rope a fundamental move. I think the get-up and the deadlift are also fundamental moves.

A few years ago when Tim Ferriss asked me to suggest some of my favorite strengthening and corrective moves for his work in Section 8 of The 4-Hour Body, I gave him the deadlift and the deadlift variations, the get-up, and the chop-and-lift. If you pay attention to the way your body performs and use the obvious intentional left-right comparisons of chopping, lifting, single-leg deadlifting, and the get-up, you will gain strength, master movement, and keep your body balanced at the same time. 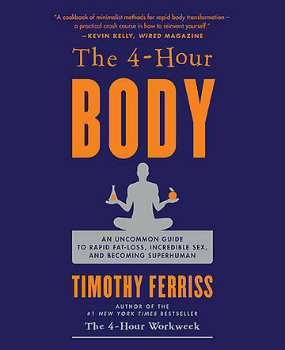 If you want to make gains, you have to push forward, which takes us to the get-up. The get-up expresses our mobility, stability and a basic level of strength, but it also gives us an opportunity to focus on breathing and to appreciate alignment. You get good at  get-ups by becoming more efficient—not by doing a gut check and muscling through it. If you push too hard in the getup, you turn it into a bench press. If you don’t take it seriously enough, you’re sloppy. You have to find a groove, and you have to accomplish it well on both the left and right sides.

I thank Pavel for the introduction to kettlebells. I thank Brett Jones for his mentorship with kettlebells. I wish I had a way to go back and add kettlebells to Athletic Body in Balance.

The Element of Natural Movement

Next, I’d like introduce you to a Frenchman named Erwan Le Corre. Erwan is the founder and developer of the art and science called MovNat, meaning move naturally. 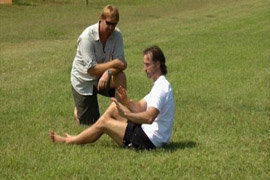 A couple of years ago, I packed up my pregnant wife and two teenage daughters and went to the mountains of West Virginia to spend five days exploring movement with Erwan. We learned to put our bodies in every conceivable position in nature—not for the point of working out, but to navigate a rocky terrain, climb an obstacle, swim across an expanse, run on changing surfaces, or to perhaps realize that in this position in this environment crawling was the fastest path.

Erwan let nature instruct and all he did was give us occasional bullet points. It fit with the new neuroscience that tells us we shouldn’t tell people to focus on their bodies and internal ideas. When I wrote Athletic Body in Balance, I didn’t tell you to engage your abs or fire your glutes, nor did I show you a technique to activate a specific muscle. Those are futile suggestions because the people who can engage already do, and those who can’t won’t find it from a verbal suggestion.

The language of movement is written in feel.

If we can engineer a situation where people feel more, they can do more. Erwan brought that concept home for us when he made simple suggestions. We would be running, and he would say, “Listen to yourself. Can you hear yourself running?”

One of the other things Erwan taught was that our balance improved as we were fatigued. When we were so fatigued we were just trying to get our breath back, he took us back to a balance beam—2x4s laid on the ground. We let the body listen to the information coming up from the feet and exert only what was necessary to maintain balance.

If you introduce balancing to people who are fresh, they try to over-think something they’ve been doing since they were two. I’ve since started incorporating the balance beam as a superset after any vigorous exercise. Erwan teaches with that external focus. He let us be frustrated by a task, and then he dropped a pearl of wisdom on us. He layered wisdom on top of, not over-instructing anything.

Fatigue and the Farmer’s Carry Go Together

Along those lines, I wish I’d said something about the farmer’s carry in Athletic Body in Balance. As you become fatigued in your workout, save some activities that don’t require a lot of motor programming but that do require fundamental programming. If I were your coach in a CrossFit gym or an NFL mini-camp, there are some activities we’d do under fatigue. We wouldn’t do anything that required a lot of skill, but we could still jump rope. We could do the farmer’s carry. We’d get on the 2×4 balance beam. 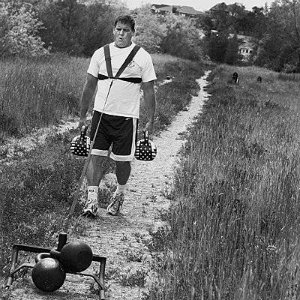 A heavy farmer’s carry forces you to align your ear, shoulder, hip, knee, ankle, and foot on your stance leg, and take short, well-aligned strides. The best way to carry that weight across a distance is with good alignment and posture. Once your grip is smoked, your workout is over because your grip is an indicator of the amount of stability and integrity you have in reserve.

These are little markers, external focus and low-skill moves we’d do toward the end of your workout.

Most of us are far too verbal in our movement instruction.

When I wrote Athletic Body in Balance, I didn’t introduce you to Indian clubs and Dr. Ed Thomas’ historical perspective, and I wish I had. Through Pavel, I re-embraced the deadlift, learned about the get-up and was introduced to the kettlebell. Erwan moved the idea of training away from the gym, dispensed with all the equipment, and showed us how a natural environment typifies the self-limiting physical development model.

Don’t just tell me how much you lift. Don’t tell me how fast you are or what kind of quarter-mile splits you run. Tell me how well you move, too. Otherwise, this pursuit could be robbing from a fundamental base that will support a much longer and better experience for you.

I’m very proud of the influence Athletic Body in Balance has had in our field. On a personal note, if this is the first time you’ve heard this information, go get screened or screen yourself. The first thing you get is the confirmation: am I on a functional track or have I been creating or allowing dysfunction on this path?

Here’s an excerpt from Athletic Body in Balance for a little more information.

If you’re interested in more discussion on Athletic Body in Balance,  I fleshed this out in a ninety-minute talk on Movement Lectures. 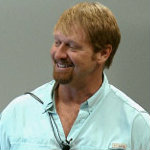 3 thoughts on “Athletic Body in Balance: What I Would Go Back and Change”