The movie The 13th Warrior is a story of a Muslim scholar named Ahmed and his account of a journey with a group of Vikings. Like any good Viking saga, there is an ample amount of axe-wielding, swordplay, and general berserker-style rowdiness. At one point a Norse warrior named Herger notices that Ahmed is unarmed, and so tosses him a sword, which is too heavy for the diminutive scholar to wield.

“Grow stronger!” Herger exclaims with the confidence and joy of a man who knows the correct answer.

There’s a whole lot of wisdom in that exchange. There are few things in life that cannot be improved by growing stronger. If you wish to become better, become StrongFirst.

What Is “Strength” and How Do You Get Strong?

We define strength as “the ability to generate force under a given set of circumstances.” Notice there is no mention of the amount of weight being lifted. Circumstances may vary from pulling a heavy barbell off the floor, to doing a one arm pull-up, to pressing a heavy kettlebell overhead, to bending a piece of steel. All these things require force. Force generated, not weight moved, defines strength.

In my opinion, strength is also an attitude. A student of science studies. A student of art practices. Strength is both art and science, so we study and practice our craft.

If we only focus on doing “more”—more weight, more reps, etc.—then we run the risk of making sloppy our practice. If we approach our training with the intention of making each rep of each training session better than the one that came before it (a smart Russian called it “greasing the groove”), then we will never add weight or reps just for the sake of adding them, but we add them because it is the appropriate way to make our training better.

As they say (whoever “they “ are), “success leaves clues.” Let’s have a look at some of the clues left behind by very strong people, regardless of the discipline in which that strength is expressed:

This is the difference between “working out” and “training.” We have all known those folks who are dedicated gym-goers who are there year in and year out but never seem to make any progress. Often these folks are lacking in a clear goal, a target. Aim at nothing and you are likely to hit it.

If we decide to go to Vegas, we need to have an itinerary. If we just get in the car and go to the airport and get on a plane, we may or may not wind up where we want to go.

Twelve to sixteen weeks before the National and World Championships, powerlifting icon Ed Coan would plan every single training session in advance. He would go into the gym and execute that plan to the letter. He became so adept at planning that in the later years of his career he would never miss a lift in training.

If it didn’t get documented, it is almost as if it didn’t happen. Much like people who do not keep an accurate checkbook registry are often broke, those who pursue strength without keeping a record of their training are often either weak, injured or both.

One of the most frustrating things in the world is putting forth a lot of effort and not recognizing progress. Almost as bad is making great progress and not knowing why or how or being able to replicate it. Keeping a training journal of some sort fixes all of these things.

Legendary strongman Slim the Hammer Man is in his late seventies and has kept a written record of almost every training session he has done over the past fifty-plus years. During that time, he has set world records in hammer lifting that will likely never be broken.

Big movements produce big strength. For this reason, we encourage big movements like the deadlift, press, swing, and get-up. We also encourage work that makes the hands stronger, because a strong grip is vital for everything from a big deadlift to a one-arm pull-up to bending steel. In most cases, if you cannot hold on to it, you cannot express your strength. Even in squatting, squeeze the bar to get more neurons firing. 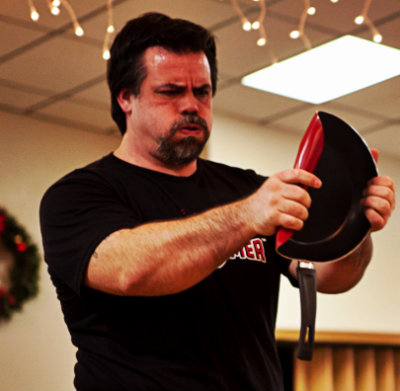 As SFG Master Instructor Mark Reifkind says, “There are two ways off a peak: step down or fall off.” We can only progress as quickly as we recover. Training to exhaustion takes more time to recover and therefore we cannot train with as much frequency.

Also known as consistency over time. In a world of hyperbolic marketing, “ultimate instant strength” sells much better than, “Add twenty pounds to your deadlift in six months,” but the fact is the fast gains tend to come only in the beginning and the longer we pursue strength, the slower it is to come. Because of this, many folks in our microwave oven society give up if they are not world champions in a year. Strength is a practice of patience, not a twelve-week endeavor. Getting strong can be boring. Being strong is not.

Marty Gallagher advises, “Get the technique dialed in as perfectly as possible, the rest is just math.” Strength is a skill, therefore it is important that we never sacrifice correct movement for the mere act of moving the weight. Let your strength be as beautiful as it is brutal.

Technical precision is one of the reasons we encourage you to seek out expert advice. A couple of years ago, I was struggling with bending IronMind Red Nails. I got some coaching advice from Jedd Johnson of the Diesel Crew—and after one session, I bent the Red Nail. This was a case of my strength being greater than my technique. Once I got all the “power leaks” fixed and was expressing my strength with the best possible technique, the resistance gave way.

Technical precision also carries a built in safety mechanism. Even a miss should look good, like an incomplete rep, not an ugly contorted fight between the weight and gravity where the lifter gets caught in the crossfire.

This is the root of everything. “Can another man do it?” asked Slim the Hammer Man when in a conversation about feats of strength. “Because if someone else can do something, then what is stopping you from doing it? It’s in the mind.” My favorite summary of this idea comes from the Mighty Atom: “Never inhibit yourself by the seemingly impossible. Think that you are strong and you are.”

Doesn’t “Be StrongFirst” Go Against the Teachings of FMS?

Not according to Gray Cook, who told me:

“There is a reason the push-up is smack in the middle of the FMS corrective sequence. The shoulder and leg raise are mostly about mobility. Rotary stability is about core coordination. They come before the push-up, which is core strength and high tension. In our priority, the push-up comes before the standing based functional stuff because we consider stability and strength to be fundamental to quality function.”

I Am a Runner – Why Do I Need to Be Stronger?

Matveev wrote, “Strength is the foundation for development of the rest of physical qualities.” This is even true in endurance sports. Consider that by becoming stronger, each step will generate more force into the ground while making the body more resilient at the same time. While it is not reasonable to think you could become a world-class runner or cyclist just through strength training, it is usually the stronger athlete who gets injured less and wins more.

Of course, as one of my students at Nashville Kettlebell so eloquently puts it, “Why are you running? Get StrongFirst so you can turn and fight.”

Is StrongFirst the “New RKC”?

The answer is no. StrongFirst is the new evolution of what was once “RKC by Pavel.” Strength was always at the core of the RKC. In StrongFirst, strength is brought to the forefront, where it belongs.

I have been fortunate to have met and trained with some of the strongest people in the world in various disciplines. The thing they all have in common is an understanding that strength is the mother quality.

It is not about the kettlebell. Or the barbell. Or the pull-up bar. Or bending a piece of steel. It is about the one thing all of them have in common: strength. I cannot be strong for you. Only you can do that. However, I can show you the means. Be StrongFirst.

Iron Tamer Dave Whitley is an SFG Master Instructor and performing strongman based in Nashville TN. Visit his site www.irontamer.com for more information.

15 thoughts on “To Be StrongFirst: What It Does and Does Not Mean”