My most vivid workout memories are set against the backdrop of the Muscle Beach Gym of the early 1960s. This famous, beloved relic, once located on the unspoiled shores of Santa Monica, was relocated by the persuasion of the city council to the creepy underground basement of a collapsing retirement hotel four blocks inland. The Dungeon was comprised of the equipment that once withstood the sun and salt air of the famous Muscle Beach. It was a dark and dreary subterranean reminder of dazzling and wonderful years gone by. You’d think something beautiful and bountiful was struck down and punished for its audacious freshness and strength.

Force open the door, one of two 10-foot aging guardians, clomp down two flights of stairs and there it was in all its splendor. That is, if you could see the place. A very long, steep and unsure staircase took me to a cavernous hole in the ground with crumbling plaster walls and a ceiling that bulged and leaked diluted beer from the old timer’s tavern above. Puddles of the stuff added charm to the dim atmosphere where three strategically placed forty-watt light bulbs gave art deco shadows to the rusting barbells, dumbbells, sagging milk crates and splintery handcrafted 2×4 benches.

Pulleys and twisted cable from a nearby Venice boatyard, a dozen Olympic bars, bent and rusty, and tons of plates were scattered throughout the 2,500 square foot floor. Dumbbells up to 160s that rattled at broken welds added the final touch that completed what was unquestionably the greatest gym in the world.

There was a water fountain in the far corner and a john in the other corner, and both worked when you needed them. Much of the light (not much) came from two skylights of glass blocks built into the sidewalk of Broadway Avenue above the south wall.

The equipment was handmade by hunky weightlifters, not craftsmen. Lumber from construction sites was slammed together by approximating eyeballs and big hammers and nails. Stout pipes held the iron plates and were wildly welded in place to serve as dumbbells from 15 to 150 pounds. Pulleys were free-hanging, six-inch contrivances with ample lengths of cable to hoist any weight at the command of the lifter.

Oddly, the underground arena didn’t have a foul smell and it maintained the same agreeable temperature year round. A few 12×12 tiles remained on the concrete floor; paint had long faded, was peeling or exposed crumbling plaster. One mirror hung, a tarnished, unframed 4×5-foot chip of glass, which seemed too old and too tired to reflect an image. Why it remained was a mystery. We had to peer, squint and study its content and, alas, give up as nothing recognizable was offered.

There were never more than 10 guys in the gym any one time, only one woman I can recall. The scene sounds pitiful, but it tells of the best gym I ever trained in. These were the moments before the first seismic shift took place. You have no idea how proud I am to have had this theater and the real-life plays that unfolded day after day as part of my experience. It’s pure gold.

Here bodybuilding began, embryonic: the original, not the imitation. Exercises were invented, equipment improvised, muscle shape and size imagined and built, and the authentic atmosphere exuded like primal ooze. We were awash in fundamentals and honesty. I loved it then, the memory even more now. The magic didn’t come from the pharmacist; it came from the soul, the era, the history in the making, the presence of un-compromised originality yet to be imitated.

Those years I, curiously content in getting a head start, arrived at the gym between 5:30 and 6 a.m. while the city slept. I like the company I keep when I’m alone: I like the sounds of silence; I like the uncluttered space. With a crowd of one, there’s no one to complain or groan, no self-consciousness, no dividing of attention, no one to impress. By the time I left, perhaps three or four other creatures would descend the lonely steps and dutifully take up arms.

The Dungeon was my refuge from 1963 through ’66. What kept me going without missing a beat was hope in an era where none permanently resided, bouncing around like a pinball in a jangling machine. There was no glory except a rumor of respect and reputation among the lifters’ underground. People in the real world sincerely frowned at me: a musclehead, a misfit, a bewildered loser who’s harming himself and isn’t doing us any good either.

Man, has that concept taken a spin.

My toughest workouts took place in the middle of those formidable years. I did have training partners from time to time, and one in particular, Dick Sweet, pushed me, encouraged and goaded me to otherwise unapproachable limits.

My recollection of a late morning workout, one day among many, sets a tone of our workouts in general. On the far end of a caving rack lived the merciless set of 150-pound dumbbells, awesome in length with pipe handles and suicide welds on the ends. These unwieldy contraptions could be further enlarged by strapping five-pound plates on either end with strips of inner tube.

You got it—giant rubber bands.

Getting them together took two guys, some muscle and engineering. Getting them overhead took temporary insanity. We won’t talk about the 60-degree incline bench constructed of wood and 10-penny nails wedged against the wall. Never did get a good look at that in the dark.

The first set was a growling dog, biting and snapping at the flesh. I love dogs. The second set went up like stocks in a bull market, fireworks on the Fourth of July, cheers for the home team. On the third rep of the third set, the rubber band snapped and slapped me in the face.

Some guy standing in the shadows snickered.

Shortly thereafter, a five-pounder bounced off my forehead; I saw it coming. This made me serious. I had two sets to go and no more rubber bands. A short length of rope got me through the last two sets.

Did I tell you I was supersetting? Workouts without supersets were no workouts at all. The second exercise was bentover lateral raises with 60s. The welds this time were on the inside of the dumbbells, and cracked, not dangerous but sloppy. Every third or fourth rep, the web of my left hand between the thumb and the index finger got pinched in the crack. This, too, made me serious.

Good thing there’s not many nerve endings there. The blood flow was light or I’d have never finished my workout. 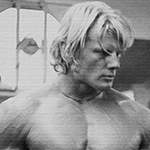 Dave Draper is Mr. America, Mr. World, and Mr. Universe. You have read an excerpt from his latest book, A Glimpse in the Rear View.

5 thoughts on “I Was 21: An Excerpt from A Glimpse in the Rear View”