Recently, a fellow trainer decided to seek my help. He’s a knowledgeable trainer; however, barbell work isn’t the focus of his training. Rather, he’s a marathoner who is smart enough know that strength training is important for everyone.

He is also smart enough to have made the decision to seek out feedback from a StrongFirst instructor and to remain coachable. I guided him through the finer points of StrongFirst methods; then, we discussed ways that he could apply what he learned to his programming so as to progress his strength in a way that will prevent overtraining while maintaining his endurance and speed.

During our time together, he said something quite profound: “With as much tension as I’m building during the set-up, it almost feels easier when I’m actually doing the lift!” 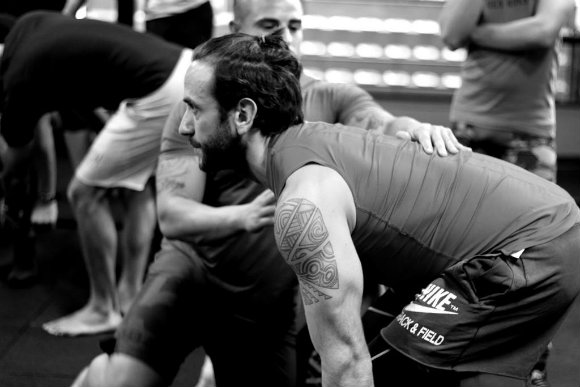 And it’s true: fully locked-in set-ups are not resting positions. They turn the body into a loaded spring, ready and aching to go. We talked about how the decision to commit to a fully on-point set-up makes it so the only way the body wants to move is the way it needs to move in order for the lift to be successful.

I have experienced a parallel to this in regards to periods when I’ve trained with or without a program—when I make the decision to “plan the work and work the plan,” the work itself becomes easier. I know what to expect and how much time to set aside; there’s nothing left to do but to get it done.

In these ways, good form and smart training are decisions we can make.

My formal education as both an undergraduate and graduate student was focused on creative writing. To this day, I think about words a lot; in fact, I have a never-ending fascination with etymology.

As a result, I happen to know the etymology of the word “decide.” Decide is connected to the French word decider, which was derived from the Latin prefix de, or “off,” and caedere, “to cut.” Decision, therefore, shares a common lineage with incision, concision, and circumcision.

The connection between cutting and deciding may not be immediately apparent, but it becomes clear upon reflection. When you make a decision, you cut away all options except for the one you are pursuing.

Decision implies action. When a decision has been made, there are no other paths available; you’ve made a commitment.

So, let’s take this idea back to the idea of lifting. What are the decisions you need to make for successful strength training? 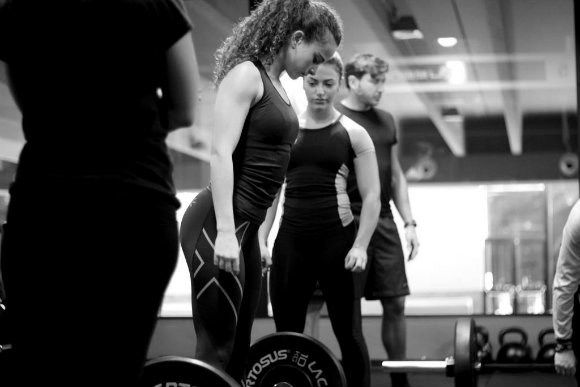 1. Decide to Have a Coach

First, you must decide to seek out guidance. You must make the fundamental decision that awaits all people who train with iron: will you prioritize your safety and capacity for long-term progress, or will you choose your ego?

I know of many people who initially favored their ego, only to have their priorities change following an injury. I encourage you all to decide to seek out the guidance of a coach sooner rather than later, and to continue to be willing to seek out instruction throughout your training career.

2. Decide to Be Coachable

I remember a session I had with Dr. Mike (Chief SFL Michael Hartle) several years ago. I was very proud of my deadlift and was excited to show it to him. However, his astute eyes noticed several tension “leaks” in my set-up, and he worked with me to dial them in.

I wasn’t able to lift as much. That day, I couldn’t even get within 80% of what I had been lifting.

That’s when Dr. Mike gave me some of the best advice I’ve ever received: “Sometimes, you have to regress to progress.” Thankfully, I made the decision to follow my coach’s instructions; as a result, I added over fifty pounds onto my deadlift over the next ten months—and with improved form, too.

I share this story often with my students. I see their frustration when a suggestion I’ve given them mandates that the weight on the bar goes down or that they temporarily step back to a regression of a movement. I then remind them that it’s part of the process; being a student of strength requires patience, not a battering ram. 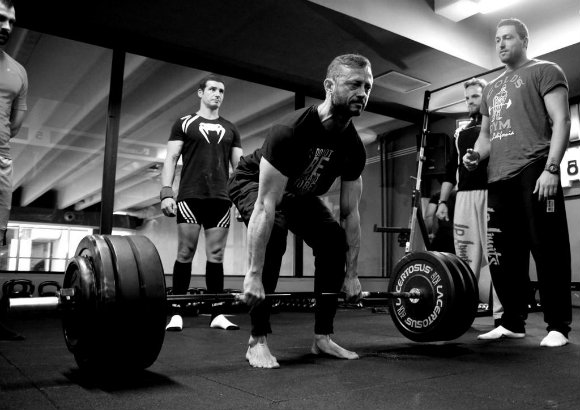 Unlike many of my fellow StrongFirst instructors, my path toward serious strength began with the barbell rather than the kettlebell. As a result, I am comfortable with extended rest periods between sets. However, all too often I see students balking at the idea of taking a sixty-second rest period, let alone the 300-second rest period recommended by Doc Hartle.

But this rest is important for many reasons. It takes at least three minutes for our ATP stores to replenish themselves after a heavy strength exertion, and it takes approximately five minutes for our heart rate and blood pressure to settle. Furthermore, it takes our mind time to regain its readiness for another exertion, as well.

Resting also comes into play within each week’s plan and between training cycles. Human bodies are not machines that purr along at maximum efficiency. During the SFL Certification, many approaches to programming are explored, and none condone training a given lift at near-max weights more than once a week. Different programs encourage different frequencies of and approaches to “light days,” but one thing is consistent: you cannot train with heavy loads all of the time.

Nor is it either safe or possible to continuously move toward an ever-higher peak. I train myself and my students with cycles that last four to twelve weeks, and follow each cycle with an appropriate deload. Not only does this enable safe and sustainable progress, it also helps training retain a degree of fun. It can be downright refreshing for driven athletes to take a step back and spend some time simply moving for the sake of moving.

I also feel compelled to emphasize the importance of getting enough sleep. Brett Jones, Chief SFG, mentioned in his post How to Exercise the Vital Muscle of Patience that if you’re only sleeping for four or five hours a night, “sleep needs to become a priority for you.” Working on improving your sleep habits can have a tremendous effect on your training (and your life)!

So, when you make the decision to train smarter, your decision doesn’t just involve what you’re willing to do during your sets. It also includes your willingness to take a step back and let your body and mind recharge. 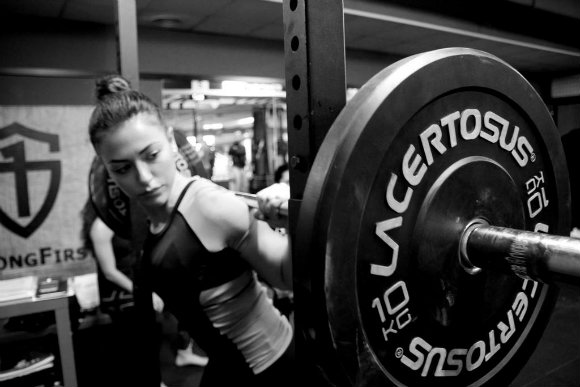 At StrongFirst, we know that developing reasonable programming is more about taking things out than of adding in “random acts of variety.” If you are training for a half-marathon while trying to improve your deadlift while committing to a twice-weekly pickleball team while really wanting to get in a few training sessions with your bodybuilder friend to help you get swole while still making sure you don’t miss your favorite yoga instructor’s classes —well, best of luck to you.

Don’t get me wrong: it’s not necessary for every person to have a specific goal for their training. In a world where many people have lost their love of movement, it is a wonderful thing for people to take part in activities that bring them joy.

But if you have a goal—make it your goal. Keep things simple and prune away what doesn’t get you there.

Let’s say I’m planning a training session for someone who wants to improve her back squat but who struggles to maintain anterior core activation. Her session might look something like this:

It’s nothing fancy, but it meets the student’s needs and matches her goals.

Another great example for someone with all-around strength goals is offered by Pavel in his post No Distractions: The Occam’s Razor Training Plan. 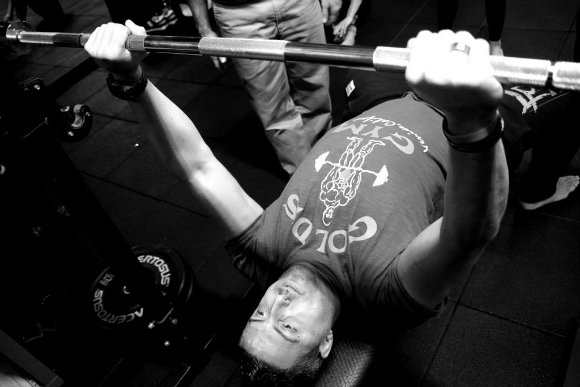 The Success Is in the Decision

Whatever movement you’re doing—hinge, squat, push, pull, carry—and whatever tool you’re using—bell, bar, or body—the key to a successful lift or set is in the set-up.

Whatever goal you’re working toward—a higher powerlifting total, a regained ability to squat, improved heart health, increased stamina and energy—the key to success is in your initial decisions to seek the guidance of the people who can get you there, to remain coachable, and to keep things simple and in balance.

Leave yourself with no other options than the one that leads to optimal performance and maximal safety.

When your body and mind have made the same decision and are working together, following the plan is the easy part. After all, it’s the only option you’ve allowed yourself. 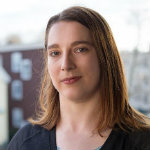 Lore works at the Eastside YMCA, one of the branches of the YMCA of Greater Rochester in Rochester, NY. Lore offers personal training and coaches several group classes; she also has experience leading small-group sessions for people on the autism spectrum and has served as an assistant coach in the Y's Livestrong program, which is designed to help cancer survivors improve their strength and quality of life.

She strongly believes that strength and fitness are for everyone and that focusing on performance-related goals is healthier and more sustainable than a primarily aesthetic focus. She empowers clients to manifest their full potential while moving safely and having fun.

Lore is also a published poet, freelance editor, and experienced baker. You can contact Lore at positiveforcestrength@gmail.com and follow her on her blog.

9 thoughts on “No Plan B: Make the Decision to Be Strong”