You already know that the swing is a high-power, full-body explosive movement that doesn’t stress the back, when it’s executed properly. But I would also say it’s one of the most effective exercises for total back health we have available to us.

As a real-world example, world powerlifting champion, Brad Gillingham has directly attributed the kettlebell swing as a key factor in his return to competition after several failed rehabilitation attempts.

My Personal Experience With Devastating Back Pain

I should also give you some background and perspective on my own experiences related to back health. Many years ago, I experienced a severe disc herniation in the lumbar spine at level L4-L5, which is a common site for herniation.

The experience was one of the most painful and devastating things I’ve ever been through. The rapidly progressive radiating pain in my left leg was so severe, there was no position I could find that would alleviate it. That meant I couldn’t sleep, let alone perform any normal functional activity. It wasn’t long after my injury that I had a surgical discectomy to alleviate the pain. The road back from surgery was a long one, but a successful one, which is another story in itself.

How bad was the pain prior to surgery? The disc herniation was so severe I had what’s termed sciatic scoliosis, which is a lateral curvature of the spine as a result of the sciatic pain (the disc herniation). In other words, I literally couldn’t straighten my spine because it made the excruciating and constant pain even worse. Imagine that. It was a bad situation that escalated quickly until my surgery.

As with most adversity, great things usually come out of it. My experience ultimately led to me becoming a physical therapist, working with many back pain patients through the years, and helping a lot of people. To this day, this is why I have the utmost respect for optimizing spinal position with training. This something I take seriously for myself and for those I work with.

The point of all this? I understand back pain much more than I would have ever wanted. The experiences provided a total appreciation and unique perspective on the importance of optimizing back health.

The Landmark McGill Study on the Swing

First, we need to remember that no single study answers all the questions and it cannot be used to make broad conclusions. We must view each study as a piece of the puzzle in the entire body of evidence in a particular area. With this understanding, there were some key findings in the landmark study by Dr. Stuart McGill that looked at the biomechanics and muscle activation of the one-handed kettlebell swing.

A key question the study looked to answer was if the kettlebell swing had a unique loading benefit that may be perceived as therapeutic for some (ex. Gillingham, myself, others), yet could potentially cause discomfort in other people? Let’s be clear, technique has a lot to do with how a person would expect to feel during and after performing the kettlebell swing, I think we all agree on that.

It should be noted that subjects in the McGill study did not have any current or previous low back issues. The study also included a single case study of the kettlebell swing performed by none other than Pavel Tsatsouline. As with most kettlebell studies to date, the kettlebell size used was a 16 kg kettlebell for the swings, with the exception of Pavel who used a 32 kg kettlebell (more on this in a minute).

The swing technique was the standard hardstyle technique, but did include “kime” at the top of the swing. Kime is a brief muscular pulse at the top in an attempt to elicit a rapid muscle contraction-relaxation.

Muscle Activity in the Swing

If you’ve performed a swing, you know that many muscles are activated. In the study, EMG (electomyography) was conducted to analyze the muscle firing of the following:

While all of these muscles are important, the hip extensors — specifically the gluteals  —are of great importance during the swing. The term “gluteal amnesia” is commonly used in the fitness community to describe the lack of firing in the glutes for many key exercises. Glute activation is one of the most powerful phenomenons of a properly executed kettlebell swing and many other athletic, power exercises.

Glute activation is so important that even the great Tiger Woods made a recent comment after a poor showing in a golf tournament about his glutes. He stated, “It’s just my glutes are shutting off. Then they don’t activate and then, hence, it goes into my lower back. So, I tried to activate my glutes as best I could, in between, but it just they never stayed activated.” These were actual comments following his withdrawal from the tournament. Just a thought, but maybe Tiger would benefit from a kettlebell swing.

Back to the McGill study. The study demonstrated significant results in regards to glute activation with the most impressive numbers produced by Pavel’s one-hand swing. Pavel generated such powerful muscle activity, his contralateral (opposite side) gluteal muscles fired at 100% MVC (maximal voluntary contraction). Without question, the one-hand swing is a proven solution to activate the glutes.

The study also revealed an interesting ratio of compressive force to shear force. Let me explain. If we have two spine vertebrae, think of the compressive force being the downward pressure of the top vertebrae on the vertebrae below it. This downward pressure is the compressive force. If we have the same two vertebrae, visualize the one on top being forced forward relative to the one on the bottom. This is the shear force. Understanding how these two forces impact the spine are significant considerations for the kettlebell swing, according to the data by Dr. McGill. 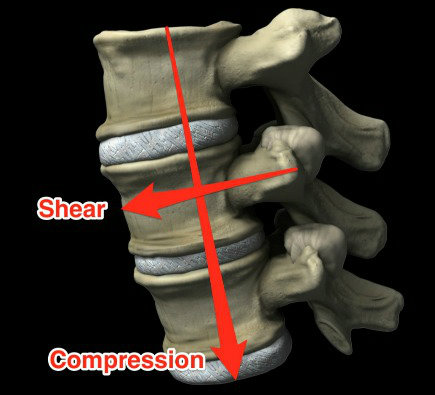 The findings of the study demonstrated that the forward acceleration of the kettlebell in the swing phase produce increased posterior shear forces in relation to compressive forces. You may expect this due to the mechanics of projecting the kettlebell horizontally. If you compare this to a deadlift, for example, you’d expect more compressive force due to the downward pressure of the load and maintaining a vertical path of the bar.

Swings require stability, yet they also promote stability. If there is true instability of one or more vertebral segments, then according to the McGill data, it would make sense that those exposed to posterior shear loads could potentially have intolerance with kettlebell swing. An important point to remember here is that these types of cases are quite uncommon, but they do exist.

The study concludes that the majority of people should greatly benefit from the effectiveness of the kettlebell swing to strengthen the posterior chain, but there may be isolated cases who may experience shear load intolerance and may not be ideal candidates. 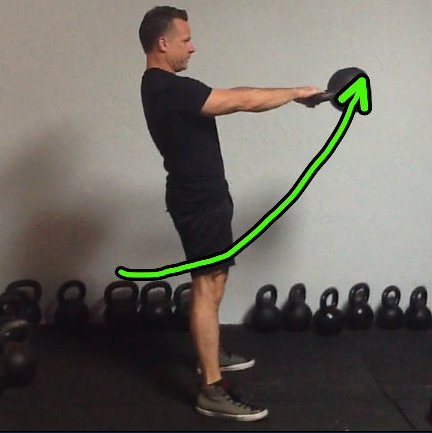 The Role of the Swing in Optimizing Back Health

Fat loss, explosive strength, a high level of conditioning, posterior chain development, and forging athleticism are all proven benefits of the kettlebell swing. One of the major benefits we don’t always consider is optimizing back heath. When it comes to back health, the swing can be considered a foundational exercise for the majority of people because of the unique features discussed here.

The swing greatly contributes to high levels of muscular activation in the posterior chain, as well as abdominals. The hip hinging mechanics, neutral spine, and powerful strength and conditioning benefits make it one of the most innovative movements we have to optimize and restore back health. As a rehabilitation professional and a former back patient, I would conclude that the properly performed kettlebell swing is essential for a high performing and pain free back for most people.

To learn more about the proper way to do a kettlebell swing, attend a Kettlebell User Course and/or Find an Instructor.

Further Reading: My Journey to the Kettlebell by Dr. Stuart McGill 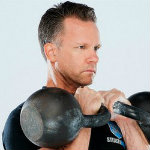 Scott Iardella, MPT, CSCS, SFG II, SFL, CISSN, USAW, CACWC.
Scott is a strength coach, movement teacher, and former physical thera-pist who earned his Master’s Degree in Physical Therapy from the Univer-sity of Maryland School of Medicine. With over thirty years of unique ex-periences, he currently coaches kettlebell and Weightlifting techniques to small groups in South Florida. He is an SFG II kettlebell instructor and SFL barbell instructor, among many other notable credentials. He’s the host of The Rdella Training Podcast, a weekly fitness and performance podcast on iTunes. The podcast and his other work can be found at Rdella Training. Finally, Scott is the author of the new book—“The Edge of Strength”—now available on Amazon.

32 thoughts on “Optimizing Back Health With the Kettlebell Swing”