I signed up for the Brooklyn Half Marathon this year with every intention of training for it with runs. Things don’t always work out they way you intend, though. But that’s where the great lessons are learned. Now, I have even greater respect for strength training.

I’ve been a runner for as long as I can remember, and competed in my first long-distance race at eleven years old. I preferred sprint distances and was on the indoor/outdoor track teams, competing at both state and regional levels.

Later, as a professional muay Thai fighter, I ran for conditioning: sprints once a week, with two or three distance sessions to build endurance. Now that I’m retired from fighting, I still run as a way to sort through life’s challenges and clear my head.

Running When I Was Fighting

As a professional fighter for fifteen years, I developed many compensation injuries and asymmetries. While rehabbing one of these injuries — a stress fracture in my thoracic spine (T1) that I was told would end my fighting career — I was introduced to kettlebells in 2008 by my trainer, Steve Milles (SFG II, SBS, CK-FMS, CICS). Not only did Steve get me back in the ring, but I went on to successfully defend my World Title.

Beginning the Half Marathon

The Brooklyn Half is a big party, and the race organizers do a great job of getting you pumped up. So when my friend Passa and I stood at the start line on a cold and drizzly May morning, I was pretty excited. Freezing, but excited. As the gun fired, we tried not to get too caught up in the excitement and to hold a sustainable pace.

Mental and Physical Challenges – and a Change in Plans

When I signed up to do the Brooklyn Half, my body felt great. But the moment I started training, my hip started giving me trouble. So I stopped running, but continued my strength training: a six-day-a-week barbell and kettlebell training program starting two months out from the Brooklyn Half. I never missed a workout.

Passa had followed a strict half marathon program along with our weight training, so I determined I would get to the park entrance with her, and then let her go. At mile three, we entered the park and I still felt pretty good. Not wanting to suffer the long, steep, s-o-b of a hill halfway through the park alone, I decided to stick with Passa a little longer, until we exited the park.

At this point, my right knee started giving me trouble. I tightened my abdominal wall to take the stress off of my legs. My lungs were on fire. Just then, we hit the hill and we hit it hard. I pumped my arms to carry my legs. I leaned forward, still standing tall to keep my lungs and diaphragm open. I pushed myself up that hill as the clouds opened up and started pouring rain on us. I don’t like running in the rain, but it cooled me down enough to relax and my lungs returned to their normal state. We made it off the hill and out of the park.

At the seven-mile mark, Passa turned to me and said, “You’re going to make it!” and I wondered, “Could I? But how? I haven’t run in months. How is this even happening right now?” Her encouragement gave me a boost, and I started thinking positively. My left glute ached, and there was a sharp pain in my right knee. I felt my left hip flexor carry the brunt of my torso. And even though I had only done a few two-mile runs, and by a few I mean three, and all indoors on a flat treadmill, I decided I could do this.

Because: Strength Training for a Half Marathon

This is what my training plan consisted of:

At mile seven, it dawned on me: my legs are strong enough — from the front squats and Zerchers — to carry me through the course.

I was introduced to Zercher squats at the SFL Certification with Dr. Mike Hartle and Pavel. They are now one of my favorite lifts. They work everything! Since the weight is loaded anteriorly, you’re forced to maintain a tall posture, hitting the abdominal wall hard as well as the back chain firing the lats and rear deltoids.

In addition to leg strength, my abdominal wall is strong enough to help me maintain proper running form, keeping me from slouching forward and collapsing down. This, in turn, removed weight from my hip flexors, so they could do what they’re meant to do, i.e., flex the leg to drive it forward.

Kettlebell omelets — just like the food — can be made from a variety of ingredients. My favorite combination is five movements that flow seamlessly from one to the next: swings, cleans, presses, squats, and snatches. These movements hit the anterior and posterior chains plus stimulate the cardiovascular system. I love doing this as an I-go-you-go training session, where partner A does all five moves, five reps each, without putting the bells down. Then the bells go down, and partner B’s go up. Five sets each partner. This omelet is a quick (about ten minutes), head-to toe-workout.

The other piece: kettlebell snatches. Because I used lower weight and higher reps, I conditioned my cardiovascular system, thereby increasing my lung capacity and endurance. The snatch is also a full-body movement that strengthens the anterior and posterior chains.

The Turkish get-up (TGU) is the knot that ties it all together. TGUs are great for upper- and lower-body stabilization. They link one half of the body to the other. This connection comes into play in running so that, for instance, moving the right arm pulls the left leg, and vice versa. TGUs also stimulate the visual system because you have to focus on the bell during the first few stages of the movement. For running, this helps me to keep a strong focus on the road ahead of me. (In other words, Turkish get-ups do it all!)

Back to the Half Marathon

Once I realized that I could finish the race, I turned on what I’ll call my “mental game.” I can do hard things. I’ve pushed through fights to come from behind and win. I’ve broken bones in early rounds, to finish the fight strong.

I’ve been strength training for years, and my legs are a lot stronger than I give them credit for. My arms and abs are strong enough to carry my legs. My core can keep my upper extremities in tune with my lower ones. And, by the end of that eight-week program, my lungs were conditioned to push through the hard parts.

The last three miles are a blur. I knew I could trust Passa to keep us at a smooth and steady pace. It was like having the comfort of my trainer in the corner during a fight, knowing they had my back. For the first time in a long time (since my fighting days), I forced myself to let go and trust in Passa. The trainer became the trainee. I kept my form and focused on the road, putting one foot down in front of the other. As we neared the finish line, we pushed. We pumped our arms, and stretched our legs. We made it!

It wasn’t my intention to run the half marathon without training runs. But this experience proved to me how important strength training is. Whether it’s kettlebell, barbell, or bodyweight training, all athletes need a foundation. And, as Bill Bowerman says, “If you have a body, you’re an athlete.” 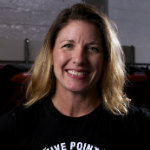 Emily Bearden has been a trainer in New York City for over seventeen years. She earned her BFA in Dance and Choreography at George Mason University. After moving to the city to pursue a career in dance, she started training muay Thai with Steve Milles and Simon Burgess. Emily achieved several regional and national titles, and represented the United States at the International Muay Thai Federation Amateur Championship in Bangkok, Thailand. With a fight record of 20-9, Emily retired (maybe) as a two-time WKA Professional World Champion while continuing to work with fellow fighters for their upcoming matches. She is also a SFG Level II and SFL Instructor, teaching several group classes and private sessions at Academy Five Points.