I’ve been asked numerous times to formally outline my triple progression system. In reality, it’s not mine—it’s as old as the hills. Bodybuilders have been using this approach for decades as a simple way to increase both size and strength in a specific lift.

The triple progression system can be used with grind lifts such as the press or the squat, as well as ballistic moves such as swings and snatches. As with all things in StrongFirst, it is principle based and that makes it adaptable to many tools. 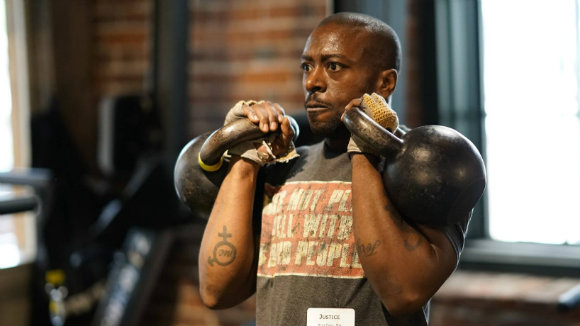 What It Means to “Own” the Weight

The beauty of triple progressions is in its simplicity as well as its self-regulation. You’re going to first aim for your goal number of sets, then reps, then finally the weight. By requiring you to be able to do a specific number of sets and or reps strongly before you advance the weight, the method limits the amount of work you can do until you adapt to the workload.

The key word is strongly. You must own all the sets and reps before moving on or this approach will not work. For our purposes 80% effort is “all out.”

So what does “owning the weight” mean in real terms?

If any of the above is not true for you, it means the weight is probably above 80% effort. “Training” occurs for the most part between 70 and 85% of effort. Above that is “testing,” not training. And even when “taking a weight” or testing, you should be in control at all times. 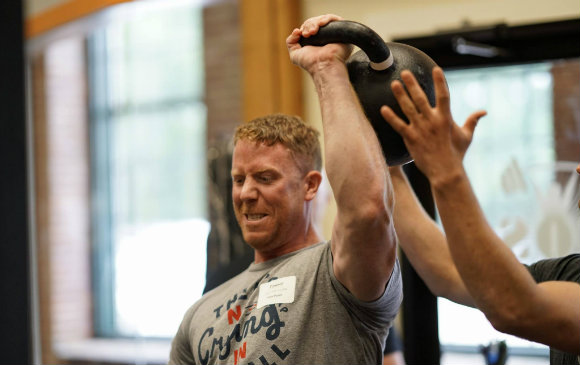 The triple progression system can work with any number of sets or reps, but since we are StrongFirst, we focus on strength and that means lower reps. For hypertrophy, I would use 5 sets of 8-12 reps. For endurance, I would choose 3 sets of maximum repetitions.

But for the grinds, I use the time-tested 5 x 5 as my baseline—this goes for presses, squats, deadlifts, or pull-ups. This approach can work with any lift, but these complex moves lend themselves to this system very well.

The plan is to only push yourself on a lift once per week. You can use other exercises that resemble the main lift on alternate days or even the same lift but with submaximal weights and volume (basically just work technique and form). Assistance exercises to bring up weak muscle groups can be done after the main lift each session, too. For example, I barbell press on Mondays but do push-ups two other days per week as well as side and rear dumbbell raises for shoulder mass and stability.

If you try to rush the process, it won’t work. The key is to know what you did the last session and plan to make a small amount of solid increases the next session. Trust me—it adds up quickly.

Also, don’t be afraid to deload and back off in weight and or volume, especially after you hit a peak. This will let you go the distance. Remember, the next step off a peak is always down. Step back, or fall off. 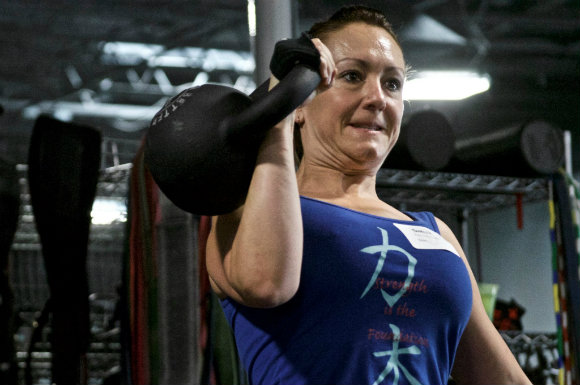 My Experience with the Triple Progression System

I was able to bring my barbell press from a very paltry 5×5 with 65lbs to a pretty decent 135lbs and a max press of 160 (98% of bodyweight) with this system. Ed Cashin, SFG II, used this system exclusively to bring his 36kg kettlebell press up to a 48kg Beast press over the course of seven months. A female student of his went from a 28kg press to a strong (but not totally strict) 36kg press using the same template.

I am currently at 3 sets of 4 and 2 sets of 3 with 140lbs in the barbell military press and am planning on being able to do 5×5 with 150lbs in the near future. I will retake my 1RM in the press then, too.

But specific training for single rep attempts is a different animal and another subject. What we are talking about here is building the base. The bigger the base, the higher the peak. No way around that. The downside is that it is a slow process. It works, but it does take patience and determination. Again, we are talking about owning the sets and reps, not just surviving them.

Here’s an excerpt from my training log as I worked up to my 135lb military press for 5×5 for the first time:

In just seventeen training sessions, once per week.

Note: for the last two years of military press training logs and the daily debrief of all my training go to my blog. I have logged every training session since May 2004. 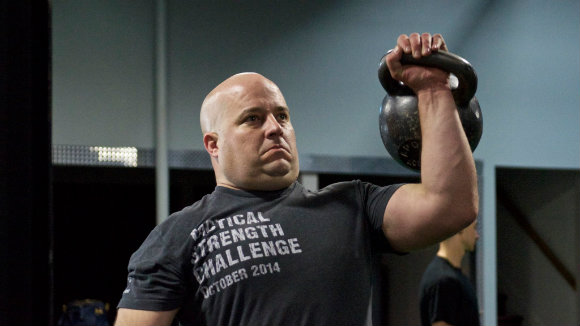 How to Get Started

First, find your baseline. Let’s use the kettlebell press as an example. You test and find you can press 5 sets of 5/5 with a 20kg bell strongly, but can’t do this with a 24kg. That’s your starting place.

Your first goal is to be able to do five sets with the weight, regardless of the rep count. So, the next session you use the 24kg and find you can do 3 sets of 3/3, but your fourth and fifth sets you only get reps of 2/2. All the while, making sure to not exceed 80% effort.

Once 5 sets of 5/5 are done, repeat that workout (at least once) until you feel you own the weight and volume.

Then, go up to the next bell and repeat the process. This works even if your next jump only allows for 3-4 sets of 1 rep. It’s not where you start—it’s how you build up that counts.

If one arm lags behind the other, stay with the weight until both arms are at the same level.

As with all real strength training, resting for at least two minutes between sets is crucial. This is not the time to worry about your calorie burn or your met-con—especially when you’re talking five-rep sets with challenging loads for five sets. You might get away with rushing the rest periods in the beginning, but once you take the loads up a few times, you will learn to relish those rest stops.

Of course, you don’t want to cool off too much or lose all rhythm, either. Work to develop an instinct for when it’s time to go. The clock can only tell you so much—learn to listen to your body.

Because as you go up in weight the loads automatically decrease to an appropriate level, there is a naturally undulating wave built into this method. This combined with the lifts only being increased one per week seems to prevent overtraining.

If, for any reason, you feel the loads are getting too heavy or slow, don’t hesitate to drop back to your former load for a week or two and use that to refresh yourself. This is especially true with the barbell versions of the press, but it goes for all other grind lifts, as well. When in doubt, back off and rebuild.

As I wrote earlier, this progression can be used for the ballistic lifts, as well. Swings, cleans, and snatches respond well to this training method. 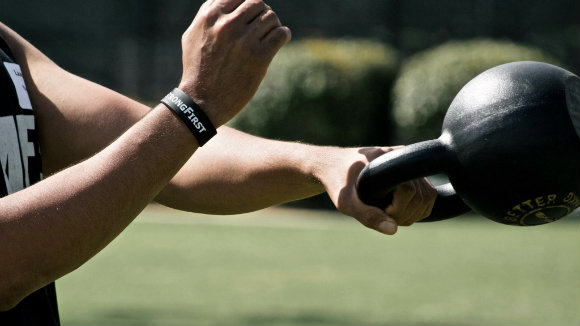 You will find that you need to back off more often with this type of volume. I suggest no more than three weeks of advancement before taking a down week. Again, I only try to increase the workloads once per week. You can definitely have another training day in between these heavy sessions, but either do a different kind of ballistic lift or lighter loads.

I went from being able to do 5 sets of 5/5 with the 48kg in the one-arm swing to 10 sets of 10/10 on a weekly basis using this technique. I also passed the 100-rep five-minute swing test from Simple & Sinister with the 36, 40, and 44kg kettlebells. Next up is the 48kg for my sixtieth birthday challenge in March 2017. I have no reason to think this approach won’t work for this, as it has for all my previous goals.

The triple progression system is a time-tested, tried and true, classic method of building a solid base to gain basic strength, up your numbers, and build a base to peak off. It’s as simple as can be, but as we all know, simple does not mean easy—especially when it gets heavy.