In June 2003, I was injured during my apprenticeship to become a truck driver. An 830kg stone, the size of an oak barrel, fell from my truck and hit me on my lower back as I was standing leaning forward. The result was three broken vertebrae, a broken pelvis, and both legs broken all the way to the toes. There was also a circular hole where the stone hit my body through which you could see flesh and bone. I spent five weeks in coma, had three cardiac arrests, and then around 50 surgeries later, the surgeons told me, “You’ll never walk again.”

But a few months later, while in a specialized medical center for paraplegic people, I started to regain feeling in my feet. My doctors didn’t believe me until performing sensation tests with needles. They couldn’t explain what happened but concluded, “You might be able to walk again. But not without crutches.”

Then I was sent to a rehabilitation center where I learned to walk again. It was a very long process, but I left that facility standing upright! On the day I finally went home (on crutches) I stopped by the hospital to thank the medical personnel that took care of me. They appreciated the gesture but told me, “You’re the one you need to thank. Without your will, none of this would have been possible.” Right then, I really realized the power of mental fortitude.

As far as I can remember, I always had a strong will that has driven me through life. I just hadn’t realized how strong that drive can be, how it can really make the difference. Between surviving or dying, between walking or sitting in a wheelchair, between reaching my goals or not. I believe we all have this strength deep within us. For some lucky ones like me, for whatever reason, it comes naturally. We don’t really have to work on it. Others need to find a way to “unlock” this strength through psychology, life coaching, sport, or whatever works for them.

By 2005 I was walking on my own, free of any assistance. No crutches. For the next ten years, I lived a normal life, but I was holding back for fear that my body wasn’t as solid as it was before the accident. I still had daily back and hip pain and a constant fear that my body would break at any moment. I wanted to do something to change this. I wanted to become stronger. In 2014 they said I would be a fool to try a strength sport after breaking more bones in my body than they could count! They said, “You are in your 30s, but your joints are those of a 50 year old.” Their poor mindset almost broke my soul and my dreams. They were the ones I trusted to take care of my body. “They” were health professionals.

But a better mindset was growing in me and one day I said, “Enough!” mustering the will to take my body and life back. I took a deep dive into strength training. CrossFit, weightlifting, powerlifting, even strongman! And indeed kettlebells (already my favorite even back then). I felt better every day. Stronger, faster, more flexible. I focused my training on quality over quantity so my body could acclimate safely and really started to live again.

Back then a typical training week included practice with kettlebells for one session, one or two CrossFit workouts, one strongman-specific training, and an Olympic weightlifting course. After just one year, and weighing a mere 75kg, I was able to barbell deadlift more than 100kg, back squat a solid 80kg, and farmer carry 120kg. Clearly, I was already feeling much better in my body and in my life in general. Of course, my body isn’t perfect, especially after these injuries, but whose is? Reaching perfection is a personal and irrational illusion that no one will ever achieve. But as long as you can move and improve you will find what is perfect for you in that moment. Seek perfection in your movements, not in your appearance.

In 2017 I discovered StrongFirst and Pavel Tsatsouline’s philosophy which spoke directly to my heart. I knew straight away that this was the exact right method for me and felt it gave my body a second life for which I am so grateful. I am grateful to have met such incredible teachers who helped me complete the Sinister challenge but more important just get to the level of physicality I enjoy today. These teachers shared a life changing curriculum with me that helped me regain a fulfilled, healthy, and strong life.

Now let’s have a closer look at my training plan, from Simple to Sinister. It all started in November 2019, after my SFG I re-certification in Prague. Pavel Macek, the Master Instructor, told us students a few times that we should try Simple, to see if we are “not so weak.” As he suggested during the course, I first tried it timeless and felt quite happy with myself at the end. So, I decided to give myself roughly one year to work towards Sinister. That gave me about 50 weeks to go from 24kg one-arm swings and 16kg get-ups to 32kg and 24kg respectively.

I usually train five times a week besides my other activities. I spent the two first weeks working with the Simple weights, just to reach the timing requirements. After that I had 48 weeks left to reach my goal during which time I added one set with a heavier kettlebell every three weeks. This would get me to Sinister in 30 weeks. As a professional scuba diving instructor I travel around the world and never really knew when and how often I will be able to train so the remaining 18 weeks would act as a safety margin to reach my deadline.

Every time I added a heavier set, I would start by doing it timeless for the first two weeks, setting a timer in order to improve the timing if possible. And then actually doing it for at least one week to get comfortable with the time. That was the plan! And we all know that the first thing dying on the battlefield is the battle plan. Everything was working like clockwork until June 2020 when I got some unexpected news: my doctors diagnosed me with breast cancer.

At the time, I was doing three sets of 10/10 swings with the 32kg kettlebell and three get-ups each side with 24kg. The rest of the sets were done with the 28kg and 20kg respectively. I was still around six weeks away from my deadline for Sinister and knew that I had to take the challenge before starting my treatment. Surgery and/or radiotherapy would cost me so much energy and strength that I would essentially have to start my training from the beginning. When I set myself a goal in life, not reaching it has never been an option no matter what it takes. So, I just decided to try the challenge with Sinister weights. Timeless to begin with but I was able to do it!

Thrilled, I spent two weeks (with one more rest day) training exclusively with the Sinister weights, faster every day to reach the timing requirements of the challenge. The first time I achieved it, there was no camera and no pressure. I just tried it for myself. Then when I decided I would do the challenge on camera I took a couple of complete rest days to stack the deck in my favor. Even with all this, I failed on that attempt! The last 20 swings felt endless and the first get-up was a mess. I decided to stop, as it was safer. Plus I was boiling mad inside. However, falling is not important as long as you stand back up.

That’s how, on July 16 in the evening, after working nine hours, at the end of the week, and without three days of rest, I just did it again. And this time the camera was on! I never felt so good and easy during the whole 16 minutes! This ease made me feel confident while waiting for the answer from our masters to tell me if the performance was good enough. And the congratulation email I got from Brett Jones a few days later was the icing on the cake!

Napoleon Hill said, “The body achieves what the mind believes.”

Our mental strength is like wings that carry us when life is a storm. No matter what you may face you will always be able to confront head on, whatever life puts in your path.

Even in the darkest days, in the hardest moments, trust yourself, believe in you and the world will open for you!

With both my mental and my physical strength I’m not even thinking of a negative outcome in my coming health battle. I will surely lose some feathers, but my wings are going to carry me anyway. And feathers eventually grow back.

This is the most important message of my story, and I feel blessed to be able to share it with you. 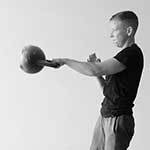 Malou Fehlbaum is a 35-year-old scuba diving instructor from Switzerland, former Border Police Officer in the K9 unit, and former truck driver. She discovered a passion for strength training, especially with kettlebells, through CrossFit in 2015 and received her SFG I in 2017. Since then, she has focused her training on kettlebells because they’re the most efficient tool to use as a world traveler. In July 2020, Malou successfully completed “Sinister.”

6 thoughts on “From Wheelchair to Sinister: The Importance of Mental Strength By Malou Fehlbaum”