Three years ago, at the age of 50, I decided to find out how strong I was. It wasn’t an easy time in my life, and this new path started with a stumble and fall before I embarked on a tough climb. I had just left my 24 years marriage which had left me anxious and in a state of deep grief. I was mired in the sticky mess of divorce and overwhelmed with too many stressful things happening all at once. On top of it all, my body kept breaking down. I was constantly injured, sore, run down, and at a dead end with a lifelong passion for distance running.

I had two options. I could run away yet again, or I could stop, stay put, and learn the lesson right there in front of me. I chose the much more difficult option. I stayed put. I breathed, I was patient, and I was diligent about healing, both emotionally and physically. I did some heavy lifting.

Life has an interesting way of giving you what you need. Often we are so caught up in our struggles, we fail to notice. But if we are quiet and observant, we can gain more than we ever thought possible.

Back in 2015, I had received, in the mail, a large pink 8kg sport style kettlebell, sent by an old friend from university. I laughed out loud when I opened the curiously heavy package. This friend has also sent me a hatchet, and a host of interesting and unusual gifts over the years and I sent him a bottle of whiskey made in the highlands of Cape Breton Island. This makes me an excellent friend, in my opinion.

I had no idea what to do with a kettlebell so I put it to work as a doorstop in my office, and occasionally to hold something down I had glued together. Now and then I picked it up and used it like a medicine ball for my core work. I certainly didn’t learn how to swing it. In my ignorance of anything to do with strength training, I was scared of swinging stuff around. As a former national team endurance athlete and long-distance runner with thoracic scoliosis, I had adapted to a lifetime of mileage by managing my pelvic instability, wearing orthotics, and developing a neurotic fear of hurting my back. And then, in early 2017, an even heavier box arrived on the front porch. This same friend had now sent me a 12kg kettlebell. Again, I laughed in disbelief that anyone would send me twenty-six pounds from halfway across the country. This one was definitely too heavy to even imagine swinging. I put that bell beside the other one in the corner of my office and mostly just looked at them, as they and their potential for strength just sat there. Apparently, I still wasn’t ready.

In October 2017, during the hardest part of my divorce, I finally found the courage to swing the 8kg bell. Unable to run due to a nagging hamstring overuse injury, I practiced hip hinges using a dowel along my spine, to lengthen and strengthen my hamstrings. Little I did I know that I was setting the stage for the best rehab of my life! After talking with David Smit, strength and conditioning specialist and StrongFirst SFG l and SFL instructor, he introduced me to the hardstyle kettlebell swing. He also lent me one of his StrongFirst books. I was immediately captivated by this safe, simple, and practical method of strength and wanted to learn more about this method beyond my own life of punishing endurance training and relentlessly pushing to exhaustion. It all made sense to me.

My first program (outlined below) changed my life. Once I had the skill to move the kettlebell safely, a completely new world opened to me. I stuck with the training diligently, completing every workout, and my technique improved with every week. I was loyal and consistent and did the entire 24-session program, which took me into the new year of 2018.

You will notice that as the reps increase your rest period decreases. Keep the same tempo with the swings to reinforce good technique and build conditioning. (Meaning, don’t speed up the swings to get more rest.)

While learning to swing well, I watched videos and read articles and peppered Dave with questions about movement, programming, and mobility. I also practiced the get-up with the light bell. Six months later in April 2018, I could swing a 24kg bell, do five get-ups with the 12kg, single leg deadlifts, a pistol squat, and did my first ever pullup. This was a major breakthrough for me, a lifelong endurance athlete. Most surprisingly, for the first time in my life, I did not miss running.

At the end of the program, I was stronger and way more confident in my ability to get strong. The workouts left me energized and prepared instead of exhausted and torn down. I started running and riding again after the hamstring injury healed up and was shocked to find that I was an improved runner and cyclist even though I had done no training in those activities for many months. I was stronger, but the conditioning aspect of the program had increased my cardiovascular fitness in a profound way.

Failure Is Part of the Process

After the swinging, I wanted another challenge, and asked Dave if he would teach me proper deadlift technique and design a new program. Starting with 125 pounds, I added five pounds every two days. The program was all about deliberate action. Every time I reached a plateau, or was unable to move the bar from the ground, I took off 10% and started the program all over again. In fact, my relationship with “failure” underwent a subtle change once I started lifting. Failure meant I could start again and train better and more effectively at a lower weight, and then improve my strength and move towards my potential, which didn’t appear fixed. I didn’t look forward to failure as much as I relished the process that brought me to failure. In late October of 2018, I lifted 205 pounds, or about 90% of my double body weight. When I hit 210, I literally high fived myself right there in the garage. This was a significant achievement. I am used to running fast, but lifting heavy objects off the floor was giving me a sense of empowerment I had never experienced before.

A curious event happened early in the deadlift training, which highlights how we are stronger than we think and how powerfully the mind affects performance. After the first practice session with Dave, I began to train on my own at the public recreation center near my house. The first time I went to the gym I had my first workout of 125 pounds x 5/2 (load x reps/sets). At the time I was completely unfamiliar with everything about barbell training: loading bars, plates, and the long rest between sets. Proud of myself for doing basic math, I divided 125 by two and stacked 62.5 pounds on each end of the bar. I got myself into position and grasped the bar and lifted it. It seemed rather heavy for a first try but I did the whole workout easily. It was only later while recording my training that I realized I hadn’t included the bar’s weight into my calculations! This meant that I had lifted 170 pounds on my first set ever without even knowing it. I still get a good laugh about that.

In my subsequent two-year journey with kettlebells and strength training, I have attended a StrongFirst kettlebell course in Philadelphia (some of best 8 hours of my life!), and completed my first Tactical Strength Challenge after doing workshops and training with StrongFirst SFG instructors Sylvain Verrier and Matt Kingstone at their excellent Victoria Hardstyle Kettlebell Club. I progressed to learning one-handed swings, snatches, cleans, presses, and body weight strength. I train three times a week, and have spent hours and hours practicing the movements, observing myself getting better, but knowing there is always something else to learn and master. I am currently training for the virtual TSC in May 2020 and plan to get my SFG Level I Kettlebell Certification.

I have never felt stronger, more bulletproof, and resistant to injury, and more confident in my ability to move. While there is no way to substantiate this, I feel that strength training is helping me cope with the symptoms of menopause and the dedication to practice has made me more emotionally resilient. I got through a very hard time, and my strength training has been a huge part of my growth as a human being. Instead of buying a plane ticket and escaping reality, I spent a thousand dollars on a rack, bar, plates, and kettlebells and healed myself in my garage.

Strength training has given me the opportunity to use my love of being athletic, drawing on my experience and skills in a new way. I have been able to revisit the foundations of practice, movement, and solid programming principles to become a better coach, parent, and athlete. It is with this sense of strength and resilience that I now walk through life prepared for today and an uncertain future, and have gratitude for those that helped me learn. Instead of running away, I stand on my own two feet and swing with precision.

Not everyone has such nice friends—you may have had to buy your own kettlebells. And perhaps you have yet to develop the courage or skill towards your first swings, get-ups, etc. Then the StrongFirst Kettlebell Fundamentals online course is just what you need to get started. 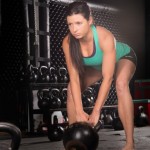 How to Build Physical Strength While Hardly Trying
Recently I achieved some huge strength goals. I didn't train for them or even try very hard. In fact, the path I took was quite boring. 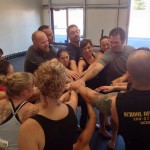 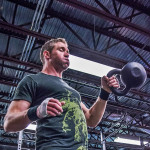 Strength Is a Skill — Strength Is Liberating
If you practice badly, pain will find you. Not in pain yet? Keep doing what you’re doing badly. I did it all wrong for decades. But StrongFirst set me straight with one of their central tenets: strength is a skill.
Lucy Smith 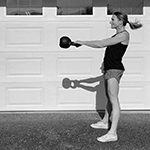 “Common sense and a sense of humor.” Lucy is a NCCP trained coach and master coach developer. Her mission is to inspire, encourage and motivate people on their path to fitness, starting wherever they are right now. After a high-performance career as a competitive distance runner and triathlete that spanned over 25 years and took her around the world, a chance encounter in 2017 with a kettlebell and a StrongFirst instructor gave her a much needed course correction. Lucy is now dedicated to pursuing strength training and helping other runners injury-proof their bodies. She is an ambassador for running in her hometown of Victoria, BC, and finishes each week happily coaching at “Up and Running,” her run group for girls.

18 thoughts on “Grounded in Strength”