Earlier this year, millions of Canadians and hockey fans worldwide were saddened when Gordie Howe, “Mr. Hockey,” passed away at the age of 88. Gordie was a Saskatchewan farm boy who rose to the top of the hockey world with his traditional values, hard work, determination, and great love of the game. Gordie’s career with the Detroit Red Wings began in 1946 when he was eighteen, and continued until his retirement in 1971. During this time, he set 25 NHL records and was selected to the All Star Team 23 times.

Mr. Howe came out of retirement two years later to play in the WHA with the Houston Aeros along with his sons. At the age of 52, he scored his last goal, his 801st, during his return to the NHL with the Hartford Whalers in 1980. It was assisted by his son Mark.

Gordie was known for his incredible toughness. Many an NHL player sported scars caused by Gordie’s elbows and fists, something I witnessed myself in the ’60s. I was sitting close to the ice when a young punk gave him a cheap shot and immediately paid the consequence, being knocked half over the boards. Gordie was feared as hockey’s toughest fighter.

Off the ice however, he was known for his charity work, his incredible kindness, and his deep caring for the people around him. Among many other acts, he was well known for shoveling his neighbors’ driveways.

My Personal Connection to Gordie Howe

My dad, Dan Summers, a multiple Hall of Fame inductee, played nineteen years of professional hockey and scouted for the Detroit Red Wings for twelve years. He was Chief Scout for several years, before he was hired as Director of Scouting of the New York Rangers in 1978. Gordie and my dad were roommates at times during the mid and late 1940s.

My uncle Bobby Summers was Canada’s Jockey of the Year in 1944. He won many famous races across the United States and was based out of Santa Anita Park in California. Of course, my uncle would pass along “tips” on upcoming races to my dad. At train stops, the entire Detroit Red Wings team including Gordie and my dad, would rush off the train to place their bets. A win was greatly appreciated, as hockey players in those days did not make a lot of money.

Post-World War II, the Red Wings were housed in the Olympia, the historical arena in Detroit. It was overrun by rats. The players slept in the dressing rooms, which had rat guards on the doors. One night, Gordie Howe, Ted Lindsay, my dad, and a player I won’t name were fending off rats with their hockey sticks. The un-named player had a rat run up his zoot suit pant leg. He managed to grab the rat as it climbed up to his groin. The player screamed and squeezed the rat so hard that its blood ran down his pant leg. Needless to say, the rest of them got a big kick out of it, and my dad would still laugh about it decades later.

Hockey and My Life as a Strength Coach

I grew up in professional hockey dressing rooms since I was about two years of age. One of my first memories is skating on a duck pond in Providence, Rhode Island. This lifestyle meant I got to see how men of character related to each other. I learned from osmosis. As I grew older, I was invited into the “inner circle” of the elite hockey teams. I went to hockey arenas, restaurants, and events with famous players, coaches, and general managers.

I became a professional coach early in my adult life in 1972. My father referred NHL players to me to train. Eventually the word spread, and more and more players from various teams contacted me for my coaching. In the mid-1970s, I trained Lars-Erik Sjöberg, captain of the Winnipeg Jets, in fighting skills.

I also became personal friends with Herb Brooks, coach of several NHL teams including the New York Rangers. Herbie was the coach of the gold medal-winning USA hockey team of the 1980 Lake Placid Olympics and was later featured in the 2004 movie Miracle. Herbie and I would get together to discuss psychology, talk over training methods, and watch Olympic teams practice. Herb was a great human being.

In my forty-plus years of coaching multi-sport athletes and people of all ages and backgrounds, I have tried to continue the lessons I learned from these great hockey people. It saddens me that my friends Lars and Herbie were taken from us too soon. Like Gordie, their legacies live on.

Talking with Pavel recently, I stated that most of the “old school”—my father’s playing compatriots and friends—have passed on. Pavel replied, “Yes. Makes you appreciate the life we have left.”

As I sit here, I can look down on my dad’s 1947-48 Red Wings team ring and think of how fortunate I am to have known the wonderful people that helped create hockey history. 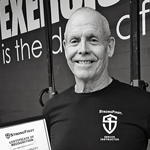 Cole Summers is a Master StrongFirst Certified Instructor ad honorem, based in Winnipeg, Canada. He began with a life in hockey, football, and other sports in the 1950s and ‘60s. In the 1970s, he was certified as a Yogendra Hatha Yoga instructor, received his black belt in Gung Fu, and wrestled for Manitoba in the Western Canada Games.

He introduced the first separate men’s and women's intramural weight training courses at the University of Manitoba in 1978. He has been a head strength coach to several university teams (volleyball, basketball, track) and longtime advisor to the head track coach for Team Canada. Cole was co-coach during the inaugural (1979) season of Winnipeg Wasps Women's Rugby, one of the first women's rugby teams in the world. He was also the strength coach for Team Canada women's volleyball.

Cole was a liaison with the Soviet State Physical Culture and Olympic Committee to exchange ideas on the training and development of coaches and athletes.

He organized and played with the first ever North American rugby team to tour East Europe, the Czechoslovakia Goodwill Rugby Tour in 1986. With the Winnipeg Wasps Rugby Club, he toured Scotland, Hawaii, Czechoslovakia, and Holland up until 2001.

Over the years, Cole has trained thousands of regular folks of all ages and backgrounds. He is known as a seminar leader and public speaker on the topics of street safety for women. For 27 years, he has been the Strength Coach at Garden City Collegiate, "Hardstyle High," in Winnipeg, Canada."

13 thoughts on “Lessons from the Hockey Life: Remembering Gordie Howe”