“If I have seen further, it is by standing on the shoulders of giants.” — Isaac Newton

Standing on the shoulders of giants means discovering truth by building on previous discoveries. That is exactly how I feel every time I assist at an SFG Level I Certification.

I have had the rare privilege to help as an assistant, alongside my teachers: Master Jon Engum, Master Fabio Zonin, Senior Instructor Cole Summers, and Senior Instructor Dr. Mark Cheng. I never hesitate to accept an invitation to assist. It is an opportunity to learn and teach alongside the best in the world, and to become a better teacher and student myself.

As an assistant, I am entrusted with important duties and responsibilities which all contribute to the successful outcome of the Certification. Furthermore, while maintaining the role of instructor, the student in me absorbs all the knowledge my teachers share during these intensive weekends. In doing so, I have come to realize I still have a lot to learn on the topic of kettlebells and strength.

I look back on where it all started, and I am grateful for all that has happened during the past three years. I have come a long way. My journey into kettlebells and strength began in the most unlikely of all places, and for you to understand where I am coming from, I have to tell you my story.

My Rite of Passage From Boy to Man

I grew up as an only child and my parents divorced when I was twelve. My father was an alcoholic and could not keep his job. My mom fell into deep depression and we were forced to sell our house. At school, I started hanging with the wrong crowd and soon enough, began using drugs.

I started dealing drugs when I was fifteen. It was an easy way to make money and I liked the attention. Deeper and deeper into the drug game I got, until it all spiraled out of control. Many people owed me money, I got into numerous fights with street gangs, and I became afraid for my life. I told myself I was going to do one last deal and get out.

At the age of twenty, I made the biggest mistake of my life. I made a deal that went terribly wrong. I was arrested and subsequently sentenced to an eight-year prison term.

Although I lost eight years of my youth behind bars, I believe everything happens for a reason. It was a “necessary accident” that took me through a journey of self-discovery and, most importantly, of strength. I went in a boy and came out a man.

A Blessing in Disguise: Discovering My Strength

When I was taken to jail, I was stripped of my possessions. Everything I associated with my self-image: my friends, my things, my lifestyle—was gone. I had little contact with people back home. Stuck in a cell most of the day, I spent a lot of time in solitude, avoiding contact with inmates who were a negative influence. Some nights, I cried myself to sleep.

It took almost two years until I finally accepted that I was going to spend most of my twenties in a correctional institution, where my physical freedom would be limited inside barbed wire fences.

My own rehabilitation was a conscious choice. I decided I would do everything in my power to make myself into a better man and come out stronger. I spent my time in training, meditation, reading self-help books, and taking college courses. I also taught myself how to draw and paint portraits, which became a hobby.

Time alone helped to develop patience through meditation and introspection. The more I learned to calm my mind, the less I was moved by petty events or circumstances. Being patient was part of life. This kept me focused on the road ahead.

Patience, respect, honoring one’s word, strength of character, and loyalty were principles ingrained into prison culture. There were many unwritten rules and I had to honor them or face the consequences. My word was my bond and also became my reputation, and because of this I was respected.

With an abundance of free time, I dedicated myself to strength training, which became my passion. Through calisthenics, I was able to train at any time. It became the perfect mental “escape.” I could transport myself to a different place far beyond the barbed wires.

Training helped me to become strong physically, which was key in allowing me to survive. Not only did it help my confidence, but when other inmates saw me training, they knew I was not to be messed with. People knew I was serious from the way I carried myself, and my appearance deterred others from preying on me.

For years, I read all the fitness books and magazines I could. I would sit for hours, analyzing, copying, and tearing out programs from different resources. I became the go-to-guy for training within my small group of trusted friends.

One day, I came across a book called Power to the People by Pavel Tsatsouline that changed everything for me. Among the multitude of training books and programs, Pavel’s simplistic, yet highly effective approach, stood out like a diamond in the rough.

I became obsessed with Pavel’s teachings. My friends and I ordered most of his books and shared them. I studied them continuously and practiced many of his programs. I received the Hardstyle magazine, where I learned about kettlebells and the “school of strength.” Along with Pavel, people like Jon Engum, Geoff Neupert, and Doc Cheng indirectly became my mentors.

About six months before my release, the Rec Supervisor at the facility ordered two pairs of kettlebells. No one knew how to use them except for me and my friends. Well, sort of. This was my first exposure to kettlebells. This awkward and unusual weight felt “heavy” compared to the more traditional dumbbell. Little did I know then…

I made the decision to become a certified kettlebell instructor once I got out. I wanted to lead others by example, teach the skill of strength and inspire young people to make better choices by sharing my story. Upon my release in 2012, I signed up for a HKC in Toronto, and that’s where I finally met Master Jon Engum. He told me about Pavel’s new organization called StrongFirst.

This was it. This was destiny speaking to me.

I immediately signed up and started preparing for the industry’s toughest and most challenging certification: the SFG Level I. It took me over a year to prepare. In November 2013, I attended a certification in Toronto. That’s where I met Master Fabio Zonin and Senior Instructor Cole Summers. The rest is history.

Today, I continue my quest as a student as well as a teacher of strength. I travel the world teaching what I love most. I share my story whenever I am invited to assist at a certification in hopes of inspiring others. In my free time, I visit incarcerated youth whose lives have been affected by drugs and violence. For some, I offer hope and strength.

A Heart of Steel

Do not be discouraged by challenges in life. I went through hard times and came out stronger. The road ahead is bumpy and sometimes we may fall. But it is our attitude and our approach that makes us who we are. Although we may fall, we get up, stand tall, and continue our march toward the top.

Never in my mind did I think about quitting. My inner strength, my heart of steel, carried me through difficult tasks like the snatch test during that initial weekend. But the journey is not over after you succeed in passing your SFG Level I Certification. You will find there is a lot more to discover within the StrongFirst system. We are the School of Strength, and you do not go to school for one day, but you go back to the well of knowledge over and over again.

Practice and polish what you have learned. Become an expert. There are myriad intricate details within each movement, within each rep. Be curious.

Rediscover what you have “mastered” and become a student again. Sign up for another StrongFirst Certification and take on a new challenge. Find a mentor, such as a StrongFirst instructor, and shadow him. Play and never stop learning. You never know where the journey my lead you. 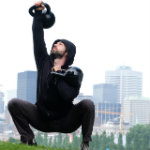 His training is based on the belief that strength fixes almost everything. He trains and teaches with a minimalist, yet highly effective, approach. He is considered an expert in the practice of hardstyle kettlebell, flexibility, and bodyweight strength training within the fitness community.

Louka currently teaches kettlebell and bodyweight training courses, as well as Flexible Steel certifications across Canada. He is also the proud owner of Hardstyle Kettlebell Mtl, his own “school of strength” in the Montreal area, where he teaches.

When he is not swinging a kettlebell or putting heavy weights overhead, he pursues his other passion of art in the form of painting and drawing.

29 thoughts on “Standing on the Shoulders of StrongFirst Giants”