Part 1: The Pros and Cons of Marine Corps Training

The Marine Corps is the most feared and respected fighting force on the planet. The storied history of the Corps is a seemingly endless report of instances of honor, courage, and commitment — the core values of the Marine Corps. Having experienced this tradition firsthand, I can tell you this reputation was earned through a training system that is second to none. From bootcamp, to occupational schools, to continuing education, the Marine Corps knows how to assess a situation, form a plan, and execute it with extreme efficiency. As instructors and practitioners of physical culture, we stand to learn a lot from an organization that has seen it all and continues to produce excellence.

To list what the Marine Corps does well would be an endeavor I don’t have time for, so for both my sake and yours, I will limit this conversation to a few, broad physical training aspects of the Corps’ culture.

That is a short and general glimpse at what is done well in the physical culture created by the Marine Corps. And while perfect does not exist in this world, my beloved Corps has done a stand-up job of adapting to the demands of being a world class fighting force and overcoming the obstacles laid out by an often tumultuous world for 239 years.

As outstanding as the Marine Corps’ training regimen is, as with anything else, there is always room for improvement. My mindset on training has changed since my days of wearing PT belts as I have since dedicated my attention to studying better ways to train the human body. My idea that the best way around a wall was through it has been replaced with more subtle and insightful strategies, and because of that I am more resilient than I have ever been. Notice I kept that to “more resilient than I’ve ever been.” I’m not going to throw out the obligatory “I’m stronger than I’ve ever been” because me-at-21 would rip me-at-38’s arms out of socket. But I will say I now see how I could have been even stronger as a 21-year-old Marine.

Here are a few ways I would humbly suggest the Marine Corps adapt their training to address some gaps that were existent during my service. My thoughts are that if the following movements were tested there would be fewer injuries in training and an even more effective fighting force would be in place.

There are a few takeaways I would like to address here as I feel they will answer some popular questions with coaching, especially coaching groups.

Part 2: Strength Has a Greater Purpose

Having served in the Marine Corps, I have conversations from time to time with people who wonder what it was like to serve in the best fighting force on the planet. “Strong people stand up for themselves. Stronger people stand up for others.” That’s an old adage that was passed on to my nephew from his papa. To me, there are no other words that culminate the spirit of my beloved Corps.

We are a group of men and who at some point decided we to put our lives on the line to help others who needed us. There is plenty of evidence to support this view. Turn on the news and you are likely to see the Marines in the middle of someone else’s trouble. Whether it be through humanitarian efforts or digging trenches and fighting persecuting forces around the globe. We truly are the world’s 911 force.

There is a side of our servicemen and -women we do not hear about too often, if at all. For most of these young men and women the battle that started in a foreign land does not end there. It follows them home and erodes away at their everyday lives. It consumes the people they used to be and leaves an empty shell void of hope. 22 of these heroes commit suicide each day. That sounds like a number that is hard to believe, but I can assure you it is real and well may be underestimated. These men and women, who so selflessly toed the line to help others, now need our help to gain the that they deserve — healthy, prosperous lives supported by those who love them and care enough to help them with the aftermath of their service

In the middle of this silent battle there are some who have stood up and taken the initiative to fight. These are men and women who have experienced the trauma and anguish that so many have fallen to over the years. Their mission is stated clearly: “We take pride in supporting veterans and ensuring their success in life.” They do this through many ways, including matching veterans up with mentors, providing professional counseling, and educating the public on this epidemic. As strong as these men are, they need our help. This is not a battle that they can win on their own.

For their years of service, Marines live a fast-paced and active lifestyle. Coming out of that lifestyle can prove to be a tough transition both mentally and physically. As facility owners, we can help. We have the means to provide a serviceman or woman an environment they have grown accustomed to and provide an outlet for some of the anxiety that comes with the transition to civilian life. This sounds like a simple solution, and it is in reality, but the impact it can have on a veterans life is big.

On October 26th, SFG Level II Paul Lyngso brought some of his students from Burr Ridge Kettlebell Club to Rebell Strength and Conditioning to engage in a small battle on behalf of our nation’s warriors. We, along with hundreds of facilities nationwide, and even some overseas, participated in The Raider Project Challenge. We put ourselves through a grueling one hour workout to raise funds. It was a huge success with thousands participating, but the fight is not over.

Lifting twice your bodyweight off the floor is strong. Reaching your hand out and lifting someone else’s bodyweight off the floor is stronger regardless of how much they weigh. We can make an impact. There are many ways we can get involved with this effort. If you know someone who has served, reach out to them. Let them know you are there if they need help. Let them know you are there for them just as they were there for all of us.

The Raider Project is just getting started with their mission and while it has been a strong start, it is a long road that they will be traveling. They need our help! Click here to make a monetary donation to The Raider Project.

I would like to thank my friend and much younger Marine brother, Matt Patruno, for helping me get this together. A combat Marine, Matt has opened my eyes to so many ways we can help our nation’s heroes. I am grateful for that. And, as he has done at so many points of my career, Dan John helped me get the many thoughts I had on this together. Thanks for being a mentor who leaves nothing to be desired. 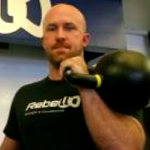 Mike Connelly might be the kindest scary man you’ll ever meet. He served in the United States Marine Corps from 1997–2001. Though his service never saw live combat, he provided security for weapons and prisoner transports and was an instructor of marksmanship.
Besides his military career, he has spent his entire life in Chicago.

Through his years as a resident, he developed deep roots to his city which spread into the motto of the business he co-founded, Rebell Strength and Conditioning.

The true-hearted strength gym promotes the altruism: Strength – Community – Education, raising over $45,000 for various causes in the little over three years they’ve been open.

Never forgetting his brothers in arms, his personal passion projects tend to involve supporting military veterans and their families.

9 thoughts on “Marine Corps Training and the Raider Project”