From winning a jiu-jitsu world championship, to serving in the Italian Army, to running close protection security for diplomats and dignitaries, Alberto Gallazzi knows how to handle himself.

Over the past decade, Alberto has passed such knowledge on to others through a combat-specific curriculum developed by his security and training company, Secutor, and as TacFit Military Division Chief for RMAX.

Now he is funneling all his practical experience into TAD 0-13 certifications and courses that teach power and strength across all planes of motion.

In this interview, Alberto explains the physical and cognitive benefits of club training, how it complements kettlebell, barbell, and bodyweight work, and his relentless commitment to education.

How did you first come across heavy clubs?

Since I took my first kung fu class at age 14, I’ve been training consistently in boxing, jiu-jitsu, kickboxing, and other martial arts. When I was a teenager, most strength training in Italy was bodybuilding, and the majority of people participating in combat sports avoided weights because they were worried about becoming too big and slow. Luckily, my older brother ran a gym where I learned how to use barbells and rings, and went outside to throw heavy rocks.

Later, after I left the Army, I worked in security for the Prime Minister’s family and wanted something that would help me to move well. This led me to clubs. I’d seen Indian clubs before, but heavy clubs were different. Because it is more heavily weighted, you can develop strength and power to a greater degree.

Soon enough I started working for the company that made clubs and realized that their information was quite basic. I was determined to find how to train more effectively with this tool. And as I did, I felt my strength and striking power improving. So I built a program that combined grinds and ballistics, then added a hypertrophy component.

I ended up working 15 years for the company, creating certifications, expanding their educational materials, and designing new clubs with a grip that won’t tear up your hands like a barbell-style grip would. I’ve now stepped away to focus purely on instruction and education.

Speaking of grip, that seems like a fundamental concept in heavy club training.

It is the first thing anyone new to club work must learn. As I mentioned, the previous club design wasn’t ideal because the grip was too similar to that of a barbell’s typical knurling. With the explosive pulling motion of swinging the club, this could hurt your hands after a while.

That’s why I redesigned the grip to make it better for both increasing acceleration and adding volume. If you squeeze the handle too tightly, you start to change your body’s structure and your posture. We also see that people tend to stop breathing when they over-grip, which typically comes with fatigue. There’s a big distance between the anchor point and point of acceleration, so if your grip is not optimal, it becomes difficult to create torque without changing your mechanics.

Other than the grip challenge, what else surprises people the first time they pick up a heavy club?

They’re surprised by how much heavier it feels than what’s stated on the tool. Say they pick up a 7kg club and I ask them to slowly extend it in front of them. Suddenly those 7 kilos feel like a lot more, because of the length and the way the club is weighted. If you’re not used to it, your arm might quickly drop. You need to get used to this new tool, start slowly, and become a white belt again.

Master StrongFirst Certified Instructor and Executive Consultant, Fabio Zonin, and I have found that even when someone is strong in linear movements, they’re often quite weak along the diagonal line. We can work on this with heavy clubs but it requires patience and respect.

How does heavy club training allow you to access that diagonal line in a new way?

When doing a get-up, you are using the transverse plane, but you cannot easily swing a kettlebell diagonally or create acceleration at this angle. Using the club in this way is an extension of the arm, so it requires a different grip to the get-up as well. Your aim is to be precise and powerful. We find that the first time somebody tries to go across their body with a 5kg club they cannot move it. The leverage and center of mass are unique, and the length presents a new challenge.

How can someone who is already training with kettlebells and other tools get started with heavy clubs?

Mechanics are mechanics, so if you understand the principles of movement patterns, you will be fairly well prepared for heavy clubs. If someone is StrongFirst certified and has a solid knowledge of kettlebell training, then we’re talking the same language. They’ll just need to understand the different grip and leverage, and the unique pulling action. However, if someone isn’t familiar with kettlebell training or strength work in general, I’d suggest they start with bodyweight movements, then progress to a kettlebell, a barbell, and finally, the club. It’s not for novices.

One of the biggest challenges is overcoming people’s initial impressions of the tool itself. It looks like a baseball bat, so people are often wary of it as they would be of a weapon. We get them used to handling this big piece of steel, and then they are able to focus on coaching cues without being intimidated by the club.

Once someone understands the grip, we teach other positioning basics, like how to keep the club at a 90-degree angle and finding the ideal distance between the body and the club. Activation of the posterior chain is also important. Then we work on moving the club up from the ground and back down. Beginning by sitting or kneeling is helpful because there’s less distance to the floor and they can see how gravity acts on the tool without dropping it from a full standing position. Then, slowly, we get them vertical.

From there, we’ll introduce the front and side cast, and the three main presses. The front squat comes next, as it teaches people to pull down with their lats and orient their center of mass as they come down towards the ground and then back up.

Can you share more about the unique lever points of the club?

Due to the challenges its shape and length present, we can use heavy clubs not only as a training tool but also a diagnostic one. If you assume a “torch position” and then try to press the club overhead, the challenge will be the range of motion and stability in the wrist. You’re going to see if you have any mobility or stability issues in your shoulder, such as a lack of internal rotation. Or, if you’re not engaging the lats, that will be exposed by a lack of overhead control. Often, I see people overusing their muscles rather than utilizing their structure. Clubs force you to engage your entire kinetic chain, balance the front and back of your body, and improve your positioning.

What are the cognitive benefits of club training?

As there’s a unique trajectory that’s somewhat unpredictable, you’re challenging yourself at the brain level. In a single movement, you can be swinging, pulling, and pressing, which requires a lot of coordination. There might be two ballistics and two grinds in just one exercise, which taxes your fine motor skills.

When you start to fatigue, it becomes a lot more difficult to maintain precision in the movement, so adding more volume can be particularly demanding. And then, if you switch from a single club to one in each hand, you’re adding a further cognitive challenge.

This is why people who try to use heavy clubs with high intensity from the start are often misguided. Someone who is more experienced and skilled can train in this way, but we know from research by Cooper and Grossman that there will be a deterioration in quality for beginners who try to do too much, too soon. That’s what I call “stupid strength.” If you want to get the most from heavy clubs or any other training tool, you must learn to use them correctly.

Which populations benefit from club training?

Clubs are beneficial for anyone who wants to improve 360-degree strength, mobility, and stability. I have heard of powerlifters incorporating heavy club training to improve stabilization. I even have a former student who’s going to show me how they use clubs in their chiropractic work.

The tactical community finds great benefits too. As clubs are highly portable, soldiers take them when deployed in war zones. Members of the armed forces often struggle with imbalances and existing injuries find that clubs can restore functional balance and dynamic range of motion. This kind of training allows them to use light tools to add strength. 7kg or 15 pounds might not sound like a lot until you start to use it.

Another benefit is improved coordination. One military team I work with does a lot of close-quarter hand-to-hand combat. They’ve found that training with clubs makes it easier to manipulate someone with one hand while holding their rifle in the other.

How do your heavy club principles and StrongFirst’s philosophy fit well together?

The kettlebell is well known, while people need more information about heavy clubs. But I share StrongFirst’s commitment to making education a priority. When I have someone who needs a school of strength, I send them to StrongFirst. From a learning perspective, I’m trying to teach people that a club isn’t just for mobility, although it can be beneficial in this area. It can also help them get strong in three dimensions, build power along different lines, and move well in every direction.

Charles Poliquin often said that you should frequently change your tools and the way you train, rather than always training what you’re comfortable with or are good at. So, I think that combining clubs with kettlebells, barbells, and other tools is beneficial. The nervous system doesn’t have eyes—it just adapts to how you stimulate it. If you can alter this stimulus by varying your training, you will find it easier to reach your goals and avoid plateaus. If you have kettlebells and clubs, you have a full gym. Studying and practicing with both will make you a more complete athlete and coach.

Whether you are completely new to heavy clubs, or keen to improve your current skills, check out Alberto’s Instagram and follow his training company, TAD 0-13, on Facebook. 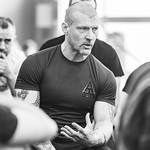 After his experience as a paratrooper in the Italian Army, Alberto spent 20 years managing close protection for celebrities, diplomats, and politicians. He also advises special operations units on their training & close combat skills.

Along the way, he became a master in kickboxing & Thai boxing, plus 2008 Survival Ju-Jitsu World Champion.

As a strength coach, Alberto has been European Director for RMAX & Military Division Chief for TACFIT. His strength education company, TAD 0-13, runs courses & certifications all over the world.