It’s hard to believe, but it’s been twelve years since I first met Pavel in New York City. At the time, I was a karate student simply trying to improve my flexibility. I attended a small stretching seminar he gave near the Empire State Building. Also present were Steve Maxwell and his young son Zack, a wushu practitioner named David Finley, and a sinewy martial artist and deadlifter from Brooklyn named Rich Morris. I can’t remember any of the other attendees, but they were mostly in the category of the “general public”—not the sort of tough misfits who would show up at the initial kettlebell certifications a couple of years later.

It was immediately clear to me that Pavel was a gifted teacher. It was also clear to me that teaching the general public was not his calling. He taught clearly, and anyone who cared could learn from him. But he was not in the American motivation business and did not speak its familiar language of goals and dreams. He was far more matter-of-fact:“If you want to achieve this, do that. If you don’t want to, tell it to someone who cares.” He was never rude—he was notably polite in fact—but he made it plain he was not nurturing anyone’s self-esteem. 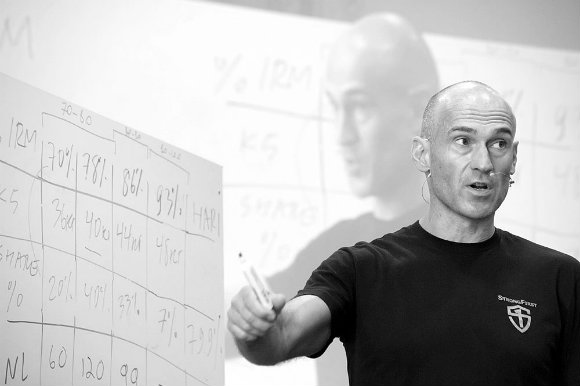 I took two books home from that seminar, Power to the People and The Russian Kettlebell Challenge. The ideas in those books have become so commonplace that it’s worth trying to remember the initial shock of reading them. Power prescribed two sets of five for two exercises—the deadlift and the military press. No three sets of eight, no curls, no bench, no triceps extensions. The kettlebell book prescribed low reps for “grinds” and up to 100 reps for “ballistics.” Hardcore strength enthusiasts with powerlifting and Olympic lifting backgrounds may simply have nodded at much of this, but for anyone who had learned to “lift” in a mainstream gym, the language, concepts, and thinking were fundamentally alien.

How I Was Inspired by Pavel

I myself found them alien. But they also sounded fundamentally right, and I paid attention. I started deadlifting and bought an early-model kettlebell. I became more and more interested in strength. Within a few years, at a weight of about 160lbs, I learned to deadlift 435lbs without a belt and to strict-press an 88lb kettlebell with either arm.

I also joined the early American experiments in kettlebell sport. Like the early Soviet lifters, we got by on guts and precious little technique. Dozens of us somehow found a way to snatch a 16kg for 1,000 consecutive reps. Others of us put up 200+ reps in the Secret Service Snatch Test. Looking back, our enthusiasm and determination were quite unbelievable. There were no girevoy sport coaches in the United States (and Pavel did not claim to be one). There were not hundreds of videos of Russian lifters to study on YouTube. We were just doing it with strength and inspiration.

The Indefinable Quality of “Class”

Along the way, I had the honor of teaching others. I attended the second-ever RKC certification in St. Paul, Minnesota. I then attended multiple other times as an instructor to the instructors. The caliber of people I met at the certifications was startling. Some were military personnel, others were personal trainers, athletes, or simply, like myself, white-collar professionals with a taste for intense hobbies. But all of them were dedicated and all of them had that indefinable quality that is sometimes called “class.”

There was never any doubt that the source of the “class” was Pavel himself. He conducted himself impeccably at all times and attracted others who did as well. The high standards of conduct were not a superficial luxury—they were integral to the atmosphere of teaching and learning we were striving to create. And the atmosphere was effective—with each certification, our students’ learning curves got shorter and shorter. Our teaching became simpler and more direct. Together, we were developing a “school of strength.”

In recent years, with three children and a burgeoning professional career, I have not had time to teach at multi-day certifications. The community has continued to attract talented people and evolve at high speed. Each of these people have, as my brother once put it, their own “superpowers,” and each has brought their learning to the community and increased its fund of knowledge. Paradoxically, the talent of the community at large keeps each individual member humble.

A couple of months ago, Pavel called me to tell me he was forming a new organization. He asked me for thoughts about a name. I suggested “Strength First.” (It turned out my fellow New Jerseyan, Steve Freides, independently suggested the exact same name.) The name finally chosen, as you know, was “StrongFirst.”

I’m proud to have contributed to the final name, and to the early history of the community. There is clearly much more to come. 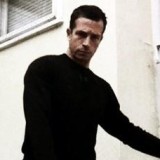