Over a year has passed, and you’ve reached the “simple” goal of Simple & Sinister (S&S). You are a man or woman, who did not just survive <16min of swings and get-ups with your 32kg, (or 24kg and 16kg) kettlebell, but thrived on it. You have some training options now. You can:

S&S provided your trout without asking you to weave your own net, but if you were paying attention while waiting for supper, you may have picked up on the process. Pavel is going to release a plan soon that maps out the first option: From Simple to Sinister. It will teach you how to fish — an “easy endurance” approach toward owning the beast (or the 32 and 24 for females).

There are many resources to get barbell strong, such as StrongFirst’s Barbell Course.

In this article, I will offer you a road map toward option three: serious endurance. It is based on the idea of improving your level of conditioning by using short but powerful bouts of work, coupled with sufficient recovery periods, for an extended overall duration.

From Simple to Serious Endurance

Using Pavel’s easy-to-understand diagram (below), the idea is to target the small, supercharged fuel system to supply the gas for the actual swing sets, and to use the large, migratory fuel system to constantly “top off” the little tank between sets. 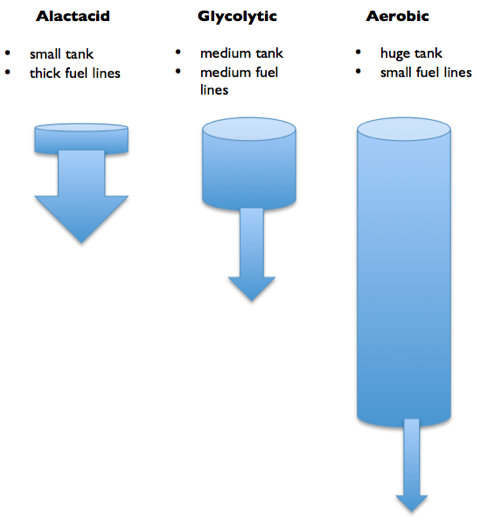 It has been suggested both by science and clinical observation (the latter from the perspective of health in later life), that it is a good idea to avoid overusing the medium fuel system during training, saving it for the actual competition. The glycolytic fuel system is the original cellular source of fuel for all life (single-celled creatures use it), and its output seems to be maintained with little-no training.

Without getting too far into the science of it, our tool is the kettlebell and our activity is the one-hand swing.

If you’re going to have an honest go at this routine, I ask you do no other training, do not change your lifestyle or diet, and please record your observations. One caveat to the above is that you may do up to ten total get-ups prior to only three of the conditioning sessions. If you choose to do the get-ups, please add them to your records and rest at least ten minutes before you begin your swings. Load your three get-up sessions as such: moderate / light / heavy.

Getting Started: Setting Your Baseline

First, let’s establish a baseline: have an honest go at the five-minute snatch test. That is, don’t game it, push through. Find a balance between running all out when the gun fires and conserving too much energy. You know, “tricks” such as pausing too long after each rep, putting the bell down after a number of reps, and starting again at the top of the minute, etc. Do not try to recover during the event, but go with your known rep scheme and see where it takes you. Put the bell down only when your accumulated workload truly forces you to.

I will also ask for your 1.5 mile run. I know it may not be great weather outside, but I don’t care for your treadmill performances. If you can’t do the run outside on a track or the like, then simply forego it. Rest 48 hours between these two assessments. If I had to choose between assessments, I would rather your run than your snatch test. If you cannot do either, choose a five-to-twelve minute event of your choosing that you can replicate at the end of the program. Any data is better then a “I feel the work is easier” type of report.

Next, let’s find your working bell. Do this either before or after your baseline assessments, but recover for 48 hours on either side as well. This may take a few sessions if you’re finding this without regularly performing one-hand swings.

Make sure that you are fresh, choose a bell, and do ten one-hand swings on the top of every minute for ten minutes. Do not try to conserve energy. Perform 100 explosive swings. Assess your fatigue. Did you have to push through the later reps to complete the ten minutes? Meaning, were you ready go when the clock said so, and, were all ten swings powerful? Was your hundredth swing as explosive as your first?

You are looking for the heaviest bell that allows you to complete this ten-minute session feeling ready to go at the start of each minute. Take no more than three sessions to figure this out, and recover for 48 hours before you begin the program. Do the best you can to avoid estimating your bell size for this program. The assessments, exploratory sessions, and requested recovery should take you eight to ten days. Plan this around your program start day.

After at least 48 hours following your last session, reassess using the same events you set your baseline with prior to the program. Replicate them as closely as possible, i.e. do not increase the bell size in your snatch test, even if you feel stronger; do not run in heavy winds, etc.

Please send your records in PowerPoint or Word document to berto.ciampa@gmail.com with “Swing Routine” in the subject line of the email. I plan to produce a follow-up based on our results. 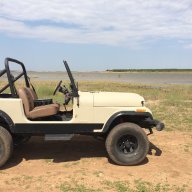 Al Ciampa has been a barbell athlete for 25+ years. A former powerlifter and bench press specialist, he has a raw bench press of 605lbs in training and 585lbs in competition, at the time, setting an IPA record. He served in the US Army first as a LRS-D team member, then as director of the Army’s hand-to-hand combat program in the South Korea: Modern Army Combatives Program.

After his service, Al co-opened and led training for a fitness and health and wellness center that served military units and the local public, where he specialized in strength and conditioning and nutrition. Feeling a desire to support the military again, he now works as an exercise physiologist and health educator for the US Air Force, specializing in rehabilitation, strength and conditioning, nutrition, and instructor development.

Al has an MS in sports and health science, is an SFG Level I, and is certified through the FMS, ACSM, and USAW. He has been recognized for excellence by the Secretary of Defense, Mr. Chuck Hagel.

49 thoughts on “From “Simple” to Serious Endurance”