A few weeks ago, I was testing some of my lifts in preparation for attending an upcoming StrongFirst Barbell Certification. Despite having limited experience with barbell training, I was pleased to find I met all of the strength requirements for the barbell testing even though I’ve only been using kettlebells and bodyweight.

During the previous week, I had also received some challenges from friends to perform dragon flags and Superman push-ups. I discovered I was able to perform these without ever trying them before. In both cases, I succeeded on my first attempt and my friends made comments insinuating that such techniques were simply easier for me, suggesting I possessed some unfair advantage that they did not.

My friends didn’t realize that what looked like a lucky first attempt was the culmination of years of practice. In other words, I do have an unfair advantage: it’s called StrongFirst.

It wasn’t always this way for me and I can remember back to six years ago, before I discovered Pavel’s teachings, when so many things that I can do now seemed nearly impossible. It seems that several years of practicing the application of the StrongFirst principles and methods to a handful of techniques plus the “one mind, any weapon” approach have prepared me well.

An Explanation of the StrongFirst Methods

When it comes to StrongFirst, less is more. We pursue quality over quantity and programming over workouts. We emphasize strength as the skill, which facilitates achieving all other physical qualities.

To paraphrase something I heard Master SFG Dan John say in regards to Easy Strength: “Have the courage to do less.” A great StrongFirst approved training session is as simple as it needs to be, essentially a work of art where the rest achieves just as much as the work done.

The other day I was looking at a favorite sumi-e painting of mine by the legendary warrior Miyamoto Musashi. On the surface, the painting looks quite simple: a bird perched on a dead branch, patiently waiting to capture a worm inching its way up the branch. The painting was likely done quickly while observing the bird in nature.

Upon closer scrutiny, you realize that entire painting was made with an economy of strokes so that most of the painting is essentially an empty canvas. The expression of the bird is remarkable and even its spirit seems to be captured. Having some experience with painting, I began to realize the elegance of each brush stroke and the discipline it reflected. As I continued to admire this painting, I realized that sumi-e painting can be a perfect metaphor for the StrongFirst methods.

In sumi-e, the artist is content to use black ink only and as few brush strokes as necessary while recognizing that the use of empty space is just as important, if not more so, than the ink. Mastering the art requires great discipline, concentration, and daily practice. Sumi-e is has been used as a metaphor for the way a warrior must live his life or fight a battle where the courage and discipline to release a single brush stroke without regret is compared to delivering a decisive blow. I imagine if the StrongFirst methods could be applied to a form of painting, it would be sumi-e.

A Lifetime of Preparation

A master artist was commissioned by his lord to create a particular sumi-e painting. The artist would receive a sum of money every day until the painting was completed. The lord waited impatiently for many months and finally journeyed to the artist’s home to see what the delay was all about.

When the artist insisted the painting was not ready and he could not commit to a delivery date, the lord demanded his painting be produced immediately under penalty of death. The artist calmly sat down with his tools and within minutes created a masterful painting with a mere handful of brilliant brush strokes. The painting was wonderful and exactly what the lord wanted.

At first the lord was pleased, but then he grew furious as he realized he had been forced to wait months for something that only took the master artist a few minutes to produce. When the lord demanded an explanation for why the artist made him wait, the artist simply said that although the painting had pleased his lord, it was not ready.

This made the lord even more furious. At that the artist showed the lord a room full of cabinets. The artist opened a cabinet and out fell hundreds of versions of the exact same painting. Then he continued to open every cabinet, and one after another each cabinet contained hundreds upon hundreds more of the same painting totaling in the thousands. As the lord looked on in amazement he began to realize that while each painting was a masterpiece, each consecutive painting was just a little better than the last, and the version that he witnessed the artist produce this very day was the best to date.

At that moment, it became obvious that what had appeared to have only taken a few minutes to complete had actually taken a lifetime to prepare for. The lord apologized to the artist and begged him to continue working on the commissioned painting until it was ready.

Be Your Own Work of Art

Training with StrongFirst methods is a lot like a masterful sumi-e painting. Some of our greatest works of art are programs like Power to the People, the Program Minimum, and Easy Strength.

We can get the job done with limited equipment, fewer techniques, and fewer repetitions. There are times of urgency when training goals and deadlines must be met, and then there is the majority of the time when we must simply be consistent and practice. Instead of constantly racing toward a result, we have faith in the process while pursuing improvement, and looking forward to the day when we will have hundreds or thousands of masterful training sessions under our belt.

Follow the StrongFirst methods and your strength, your skill, and your body will be your own works of art. 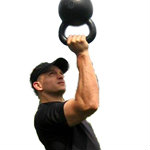 He can be reached on Facebook at Omaha Elite Kettlebell and by e-mail at SFG.John.Stevens@gmail.com.

26 thoughts on “The Courage to Do Less: StrongFirst and Sumi-e”