Circumducitur cervicalis syndrome is also known as rotating cervical syndrome. Do neither of those names sound familiar to you? Well, this not very well known condition is actually quite prevalent in our society today. People of all ages suffer from it, sometimes consciously, sometimes subconsciously, or sometimes even both.

Once a person is afflicted with this condition, it is difficult to overcome. It is possible to defeat this malady, but it requires mental and physical fortitude—qualities that are hard to come by these days.

I know what you’re thinking: Has Doc lost his marbles? What is he talking about? Why is he using Latin? This is the 21st century! As you read on, you will discover I am not mad and have not lost my marbles. You will learn how to recognize circumducitur cervicalis syndrome and how to overcome it, both as a trainer/coach and a trainee/athlete.

What is Circumducitur Cervicalis Syndrome?

Alright, I admit it—I like Latin. I learned it in eighth grade and use it in my work as a physician when describing parts of our anatomy. Circumducitur cervicalis syndrome (CCS) or rotating head syndrome, the English translation, is a play on words. It refers to a condition that occurs when someone is in the middle of some kind of physical action, whether it be an athletic event, a training exercise or movement, or even physical work. It can also occur prior to the action.

Trust me, you’ve seen it. Think back on a time when you were training someone and gave them a task you knew they were capable of doing, even if they had to exert themselves and go outside their comfort zone. For example, your student started a set of three reps, the first rep went smooth but slow, the second rep was harder but finished strong, and the start of the third rep was strong but the slowest of the three. Midway through the third rep, the student started to struggle (in a good way)—and that’s when it happens. This is the moment when people start to exhibit the classic signs and symptoms of CCS.

How can you recognize CCS? Look for the afflicted person to rapidly rotate their head side to side while at the same time struggling and grinding away at the rep. After what seems like an eternity—or close to five seconds—they let out a dejected sigh, rack the weight quickly, and hang their head. 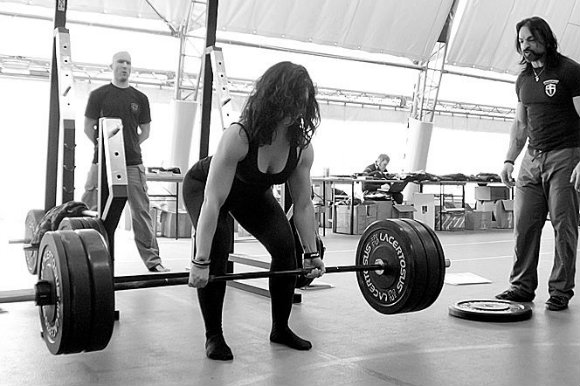 As a physician, we are required to take many psychology classes in school. Not enough to get a degree in it, but enough to understand our patients and what they are going through. One of the aspects of this teaching was the concept that thoughts create feelings which create actions which create results. This cycle can then continue on to create more thoughts and the result can be fantastically positive or horribly negative.

When I am teaching at a StrongFirst event (whether it be a SFL, SFG Level I, or SFG Level II) or coaching football or track and field, and I observe this happening, I stop the the Certification or practice and give my CCS talk. If you have heard me give this, raise your hand. If you have not, enjoy!

When CCS Occurs Prior to the Set or Lift

CCS is a sneaky malady in that it can occur before your student even touches the barbell, performs any high intensity exercise, or participates in a competitive sporting event. It can happen prior to the set or while initiating the movement. You may even see your student pace around or be waiting nervously prior to starting the set. A lot of “What ifs…” and “What happens…” get created here while waiting to start (remember: thoughts become feelings which become actions which create results).

Other symptoms such as increased respiration, pulse rate, blood pressure, and muscle tone/tension while “relaxing” before the set; being fidgety; talking about random things; and checking the cell phone every 3.2 seconds can be signs the person is either not ready or doesn’t have the faith that they are ready to execute the lift. 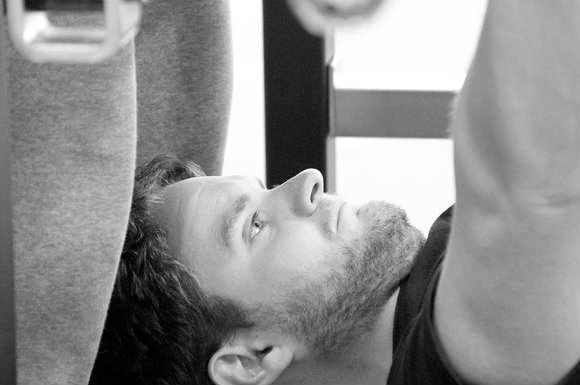 If CCS Occurs During a Set or Lift

When a student or athlete starts to exhibit CCS during a set, the chances of success decrease tremendously, almost to the point of having no chance of success, along with the possibility of getting hurt. This type of CCS, is more difficult to overcome as it occurs while one is grinding or struggling. It will take many reps of practice for a person to stop doing this during the effort.

What You Can Do to Eliminate CCS

If you as a coach notice either of these types of CCS happening, stop the student immediately. Have a brief talk—explain to them that they need to focus only on the process, not the end result. Focusing on the process allows them to think about each rep as its own distinct entity. As they successfully finish each rep and move on to the next, they eventually find themselves done with the set—and now see themselves as a success.

A very effective way of changing the student’s negative thought process cycle is to teach them to use the word “STOP” when negative thoughts start. When they have thoughts that are either negative or counterproductive to what they are trying to achieve, have them yell “STOP!” either out loud or to themselves. This can be done prior to the set/lift or during. Doing this helps the negative thoughts to cease and desist. After yelling “STOP,” the student needs to immediately follow it with a positive thought or affirmation. This method works wonders and helps break the potentially negative cycle that can plague students.

Learning to embrace the struggle and grind and all that it encompasses is a skill that takes time to acquire. Many small successes over a long period of time add up and create the proper synaptic roads in a person’s CNS that will pay off when the occasion calls for it. As Nike says, “Just do it!”

Additionally, the coach and student will need to come up with a one-word command that can be used during the set/event to help the student quickly and without much thought change their thought process. This will take some practice but after time, it will be used less and less as the student builds their confidence when they are struggling and grinding away at a hard set. 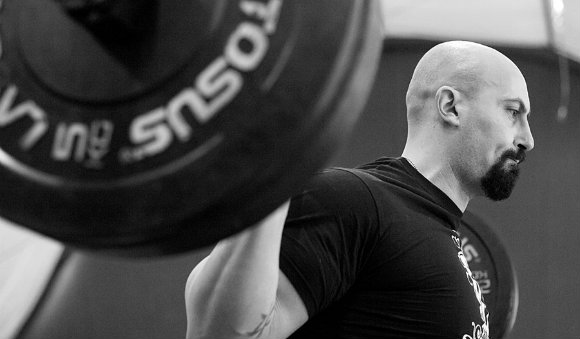 Make sure to practice the aforementioned command with lesser weight, i.e. with warm-up sets or lower intensity work sets, so the student/athlete gets a chance to experience the effectiveness of it prior to having to implement it when the time to struggle and grind presents itself.

When your student walks up to the barbell, kettlebell, or OAOLPU, or is getting ready to play a tough football game or run the best 100m dash or 5000m run of their life, they need to know they can do it. Having the confidence to perform at their best will help forestall the onset of CCS and its negative side effects.

When I squatted my personal record of 705 lbs. at the USA Powerlifting Nationals, I remember walking onto the platform, getting the “squat” and “rack” signals and seeing the three white lights after the lift signifying it was good. What I don’t remember is doing the lift.

I was so much in the zone that there was a singular purpose to what I was doing—moving that weight. Yet when it was time to execute the movement, my subconscious, trained from many reps in the gym, took over and did what was needed to accomplish the task. I knew walking up to the rack that the weight was mine. All mine. Nothing was going to deter me from achieving this lift.

This was all set in motion from earlier training sessions and from time spent visualizing my success. Focusing on the process and not the end result was key to achieving my goal that day.

If you know someone who suffers from circumducitur cervicalis syndrome, both figuratively and literally, use the above tips and information to help them stop and change. It will make a world of difference in their training, sport, and life. As my good friend Yoda always says, “Do or do not. There is no try.”

Note: Circumducitur cervicalis syndrome is a term that was created by Dr. Michael Hartle. There is no medical condition so aptly named. However, the thoughts, feelings, actions, and results that CCS refers to are real and occur or have occurred in many students and athletes. Recognizing this challenge and helping to remove it is what this article is about.