Since I was a child, I have always wanted to be strong. I’ve always been attracted to anything that was a manifestation of strength and power, but I’ve never had a particular attraction to competition. On the contrary, those who know me know that by nature of my character, the stage has always created in me a particular sense of inhibition and embarrassment. So how did I come upon the the idea of participating in a national powerlifting competition?

What I was looking for was the comparison—as well as the courage to overcome my timid nature. For over a year, I’ve been training alone and creating my own workout programs, and all I have to understand if what I am doing is right are my sensations. Yes, of course, I periodically run 1RM tests, but lifting more than the previous month, but not knowing if the lift is valid within the regulatory parameters, does not really mean I have improved. Technical improvement sometimes also requires the renunciation of the hardly earned 1RM, it means having the knowledge that you need to work on a slow but steady improvement that will give results in the future.

The awareness of how necessary the ability to compare myself came clear to me after I attended the FIPL (Italian Powerlifting Federation) Instructor Certification Course organized by AIF (Italian Academy of Strength). For FIPL, the platform is the king to fully understand the obtained results and to make comparison constructive and educational.

Thanks to StrongFirst, I learned how to become stronger. Thanks to ongoing close work with Fabio Zonin and the teachings of Pavel and all the StrongFirst leaders, I learned over the years how to increase strength and power with the use of kettlebells and barbells. This is a winning and indispensable combination for me. The curriculum with FIPL-AIF gave me the way to welcome a new challenge. I was aware this would revolutionize the way I train and the technical execution of my lifts, but it was a necessary process if I wanted to get closer to the world of powerlifting, a sport that is geared toward competition.

Choose Your Training Based on Your Goals

When you choose an execution modality for the squat, bench press, and deadlift, you must first choose your goal. What I had done previously had made me stronger, but wasn’t appropriate for the technical diversity of the powerlifting competitions, especially in anticipation of aiming to one day compete with the equipment of powerlifting. My new goal was becoming stronger in the powerlifts according to the parameters of an equipped competition.

I had found the appropriate school for my new goal, I just had to commit and work hard. So after the first weekend of my FIPL-AIF course, where the theme of the study was the squat, I went to the gym, unloaded all the weights from the barbell, and restarted with the empty bar. Down, squatting, in isometric hold for five seconds to listen to the load, my feet, and my body’s position and to look for the angle at which the movement had a meaning for my new challenge.

While the FIPL-AIF Instructor’s Course was progressing, I found myself forced to revise my technique for the bench press and the deadlift to fit my new goals. The latter, for example, that I always performed in the conventional style, does not really suit my physical characteristics, which is why I’m now currently working toward the sumo style. Of course, this is in the view of “I want to lift more weight on the platform,” while for general physical preparation the conventional style remains, in my opinion, the number one choice.

I was able to do quite well what I was doing at the time, but I wanted to learn a different style in order to improve both as a trainer and as an athlete and in anticipation of the SFL StrongFirst Barbell Certification that I was going to attend. The SFL would turn out to be one of the best experiences I’ve ever had in my training curriculum. What I previously learned from FIPL-AIF was in many respects incremented and completed, and everything perfectly matched with the canons of the school of Pavel.

And so since February I have gone back into questioning. I wanted to be stronger, and I wanted to do it constructively by adding the new notions to what I already knew. I wanted to put more kilos on the bar, and I wanted to continue my training with kettlebells. I wanted to run my lifts according to the rules of powerlifting. What is the best way to confront yourself and to understand the rules of a new game? Play the game. Take what you know and put it to the judgment of the platform in a competition.

When I put on paper my first preparation, in early February, I had not yet developed the idea of competing, but I definitely wanted to better myself, and enrich my knowledge with new notions.

So I wrote my first program of four days a week: two workouts of squats, two of deadlift, and four of bench press, one of which was inclined. The fifth day was devoted to pull-ups and kettlebell military presses. It may seem an exorbitant program to someone. In fact, it is perhaps impossible for an advanced athlete, but for me, since I saw myself as a beginner, it was great. I needed to practice. Each lift was trained once a week with a light load and medium volume, but with stops along the critical point: 5″ at the chest before pressing in the bench press; 5″ in the bottom of the squat before coming up; 5″ wedging at the bottom of the deadlift before lifting the barbell.

In the second workout of every lift, I applied the concept of MAV (Best Fast Lift, a kind of a technical maximal of the day), which in my case was a self-taught MAV because no one was there to check the correctness of my lifts. I performed five or six sets of three reps with increasing weight, then proceed with singles, in order to find the best load I could manage that day, the one that I felt I owned, that gave me the feeling of domination and control beyond which I would not have been equally defiant on the weight. At that point, I stayed on the same weight for five to six more singles, always in complete control of the lift, because if I felt different I would have quit. Very often at the third or fourth single the game ended.

The third workout for the bench, in addition to the inclined, provided a little technical work with a light barbell. I found the bench press to be extremely difficult for me at that time since I had to change my grip to a much wider one, with 81cm of distance between my pinky fingers. This was really a lot compared to my usual grip, which is why I found it necessary to practice a little more.

After six weeks, I turned to almost zero volume and intensity for seven days, in which I only did a mild practice of the lifts, a necessary de-load before starting with a new program.

My Second Phase of Training

The following program was developed over nine weeks, although in the fifth week there was a sharp drop in volume and intensity, as a de-load. The squat and the bench were performed three times every week, while the deadlift only once a week.

My training sessions of pull-ups and kettlebell military presses continued in perfect StrongFirst style, and were trained with the principle of improving strength and not as accessory lifts. There is no need to talk here on how I trained them because they go off the topic of my experience in the world of powerlifting. But I can assure you that many of the techniques used for training the deadlift work well for pull ups, and many programs for the bench, revised, do well for the kettlebell military press.

Moreover, in all these months that I devoted myself to this new experience, the kettlebell get-up, snatch, and swing were always been present in my programming, all done with low volume, but with heavy kettlebells. I also cyclically inserted among accessory my lifts the kettlebell push press and kettlebell jerks with medium-light bells.

Injury, Recovery, and the Value of Team

In mid-May, while my training proceeded at full speed and I was focused on participating in the Italian Raw Powerlifting National Trophy, I had a little accident: I tore my left calf. It was a month before the competition and I could not walk. I forced myself to take a week off. Of course, I continued with my bench training.

The second week after the accident, I started again to train the squat and the deadlift with very light loads and the help of an elastic bandage wrapped around my calf. At the end of that week, I decided I would participate in the competition. After all, what I wanted was the comparison and to understand how a competition worked—what it would mean to participate not only as a spectator, as it had already happened, but as an athlete.

The last ten days of training before the de-load that preceded the competition was recommended to me by coach Giovanni D’Alessandro of the powerlifting team of Rome, who also gave me the opportunity to compete by including me on his team. The great merit of Giovanni—who still writes all of his programs on paper, with which he has an almost mystical relationship—is that of making me rest by giving me a program that included significant recovery for me at that time.

Very often, when caught in the euphoria of a test, we forget that recovery is one of most important variables, as much as is training. And the clinical eye of a coach also serves this. In addition, I learned from Giovanni all the rules of the platform and from his team of athletes I’ve learned what it means to train and compete as a team. The team is, for someone who wants to grow in the sport, as the family is for a child. Over the years, I have learned to know myself, to feel the weight, to be the trainer of myself. But in ourselves there’s never enough lucidity and self-criticism to overcome the limitations that sometimes, seen through the eyes of others, are only steps.

Special Thanks and the Result of My Powerlifting Competition

Every wonderful experience in which we achieve important objectives we couldn’t previously imagine reminds us of the people in our journey who have made us what we are. I can’t forget any one of my teachers:

It is for all these people who have built what I am that the silver medal I ended up winning is actually worth gold.

Do you need to train with a barbell? Take Pavel’s Bar Exam. 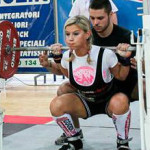 Elisa is the author of numerous articles for well-known magazines and websites. She participates on a regular basis by in courses and workshops both in Italy and abroad. She works as a personal trainer and kettlebell trainer at Axel Gyms and Fitness Vicenza and has regularly worked with Fabio Zonin.