If you have never heard of Herschel Walker, you should look him up. He was an outstanding football player who won the Heisman Trophy in 1982 at the University of Georgia as a running back and played professionally for fifteen years—three seasons in the United States Football League, and twelve in the NFL.

If his total all-purpose yards gained were combined from both leagues, he would be ranked first in the NFL record books where he is currently ranked eleventh. He retired from football in 1997 at the age of 35 without sustaining any serious injuries. He even competed in mixed martial arts at 47 and has a 2-0 record, with both wins by TKO over opponents who were much younger.

As great as Walker’s sports career has been, the most astonishing thing is his training regimen. All his training centered around bodyweight exercises in massive amounts of volume. Walker performed several thousand repetitions per day using a variety of exercises, and still claims to do 750-1,500 daily push-ups and sit-ups at 54 years old.

We can easily toss this aside and say Walker has superior genetics, as his training goes against conventional wisdom. However, success leaves clues, and there is something to be learned from his unorthodox training routine. Within it may lie a method for keeping our bodies strong and healthy, potentially reaching new levels of strength.

Attempting to follow in Walker’s footsteps, I have not only increased my endurance, but have maintained and gained absolute strength by training the standard push-up.

Over ten years ago, I benched 315lbs for the first time. I can’t say it was “legal” or if it was really “all me,” as my spotter assured, but it did go up. Years of wear and tear then led to a few surgeries, the last being on my right shoulder in 2010.

Following a long rehab, I discovered a new love for the kettlebell press. The bench press became relegated to periodic cycles, with my last ending on July 3, 2014 with a max of 305lbs. Around this time, pain began to creep back into my right shoulder. Not seeking another operation, I avoided movements that caused issues and the bench press was discarded. It was a sad decision and one my inner meathead had a tough time with.

My new focus became the Beast Tamer Challenge. After three years of being stuck at the 44kg, I designed a six-week program that blasted me through my plateau, and I achieved my goal on June 26, 2015 (pictured below). Afterward, I dialed down my pressing because I was tired of the nagging issue in my right shoulder.

I began this push-up journey by doing sets of 25-35 push-ups, following the “grease the groove” method (GTG). My volume ranged from 100-600 reps each day, taking a day off if needed. The plan was to try this for a year, then retest my max. I accepted the fact I would likely lose some strength in the process.

Most of my other training wasn’t structured, with deadlifts and push-ups being the only lifts trained with consistency. I occasionally tested my pressing strength, and to my surprise, never failed to put up the 48kg with my left arm. Though I could still only press the 44kg with my right, I had re-gained the ability press pain free.

Last October, I attended the SFL Certification. When I had registered earlier that spring, I tested my bench and easily pressed 245lbs. This indicated the push-ups were maintaining a minimal level of strength, and I could forego training the bench press. Leading up to the Cert, I completed an eight-week military press program on October 8, 2016, pressing 200lbs for a personal record. That same day I bench pressed 315lbs, a 10lb increase from over two years ago, and pressed the 48kg with my right arm for the first time. The military press program possibly helped achieve this; however, I give the push-ups credit for increasing my bench. 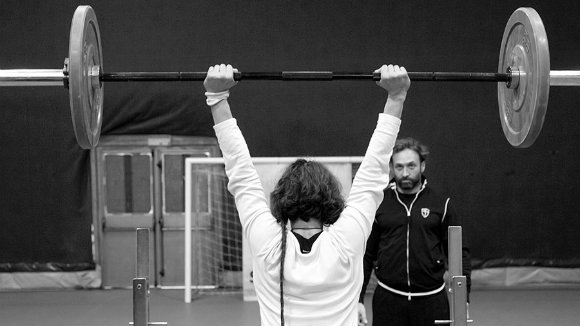 Toward the end of that press program, I altered my push-up training with Pavel’s recommendation. At the leadership meeting last summer, I casually mentioned my push-up goal to Pavel. A couple of months later, he emailed me guidelines based on his new research using Strong Endurance protocols (which is fantastic, by the way). I tested my rep max for the first time in a year to begin this new training, and to my disappointment, I only did 57 push-ups—a measly seven-rep increase considering the volume I had done. I will say the month leading up to this was much lower in volume compared to others.

I began my new training as Pavel instructed on September 22, adding a resistance band to increase the intensity and doing shorter sets with explosive reps. While the daily volume was not as high, I still did 100-200 daily. A month later I tested my max and did 67, another ten-rep increase.

After another month of this, I was instructed to remove all overhead movements other than an occasional heavy press or get-up. I decided to go further and eliminate everything other than deadlifts to have as few variables as possible. During this time, I performed one day of low volume pressing and pressed the 48kg for the second time ever on my right arm. Ten days later, I bench pressed 315lbs with a legit pause on the bottom that would have earned me white lights. This was three months after my last attempt. This convinced me the push-ups were the main contributor.

My following training notes illustrate the effects high volume push-up training has had on my strength:

This is my bench press volume over the last two and a half years:

My Conclusion on Push-up Endurance Training

Have the push-ups given me strength? Absolutely. I have learned how to maintain my absolute strength without having to pursue it on a regular basis. For those of us with extra mileage, this could be a way to keep us healthy, strong, and continuing to make progress without the risk of downtime from injury. On the other hand, if injury has occurred, strength could be maintained using this approach and possibly aid in recovery.

Occasionally I will still have some shoulder irritation if I push too hard or have an issue with technique, but it is much more manageable and far less frequent. My shirts are also tighter from having built a little muscle, but mostly because of the constant “pump” from doing push-ups all day. Hooray for hypertrophy!

Do I still believe in lifting heavy things? Absolutely. You still must learn the skill of lifting and applying high tension methods when under heavy loads. Plus, I love hoisting heavy things. The point is we should find balance in our training. We often swing too far to one side of the strength pendulum and forget that all types of training have value and can contribute to one another.

Adding this type of strength endurance training to your daily routine isn’t complicated. Simply start small and build up. If you can do 20 push-ups, begin with sets of 10 and grease the groove throughout the day. Gradually increase the daily volume, allowing a minimum of fifteen minutes between sets. After four weeks, test your rep max. If it increases, add reps to your training sets keeping it around 50%RM.

Another method is to ladder your GTG sets, varying the reps per set from 30-60%RM. Feel free to vary hand width from day to day and play with other types of push-ups, but keep the intensity low. Keep your body tight, but only apply the appropriate amount of tension to maintain position.

If you can’t do at least a set of twenty push-ups from the floor, lower the intensity by placing your hands on an elevated surface, such as a box. You should be able to perform the push-ups at a minimum pace of one rep per second. If you are grinding out reps, the intensity is too high. As an option, you could alternate weeks of high-rep elevated sets with weeks of low-rep strength focused sets from the floor.

Once you are in the 50RM range, you may want to begin adding banded push-ups as I did per Pavel’s guidance. Use a band that would bring your max to 20-25 explosive reps. Use GTG and perform 2 sets of 10 reps, resting 30 seconds between. Perform each push-up as explosively as possible. You will have to generate more tension with these to maintain a strong body position. Vary your push-up volume by 20% each day. I am currently rotating between cycles of banded work and high rep ladder sets.

Push-ups for the Win (and the Cake)

Though my primary goal has been endurance and the training planned accordingly, the strength maintained is a very welcomed and unexpected “what the hell” effect. I am still chasing the 100-rep set with a current rep max of 75. So far, I have done up to 1,000 push-ups in a single day and almost 100,000 total from when I started about a year and a half ago. I have discovered I can indeed have my cake and eat it, too.

Jody is a StrongFirst Certified Team Leader and Elite Instructor residing in Birmingham, AL, with his wife and children. He owns and operates HMG Fitness where he helps people become the strongest version of themselves. He trains all types of people ranging from weekend warriors and grandparents to tactical operators and athletes.

When he isn’t running his gym, he can probably be found in his garage doing his own training, be it push-ups, swings, or bending steel. Other times he is enjoying his wife’s delicious cooking, working in the yard, or watching a Disney film while a toddler uses him as a jungle gym.

33 thoughts on “Strength in Numbers: A Case for Push-up Endurance Training”